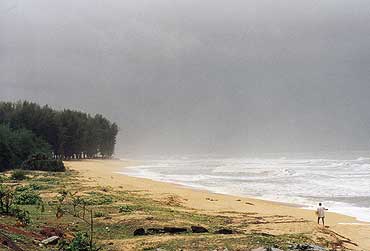 outlookindia.com
-0001-11-30T00:00:00+0553
On July 25, residents of Morkulangara, a crowded locality in Changanassery in central Kerala, were startled out of their sleep in the small hours by what sounded like a clap of thunder. At daybreak, they stepped out in the pattering rain to lug the buckets and vessels left overnight to collect rainwater for domestic use—overnight repairs on a broken pipeline had cut off water supply to the area.

But what they saw in the buckets stunned them—a dark red liquid glowed dully in the dawn light. "I thought the cows had come during the night and urinated into the buckets," laughs Kuttappan, 77, an std booth operator. Like most residents, he emptied the buckets of their "foul" content and refilled them with clear rainwater.

Intrigued, a few residents preserved the water they had collected and displayed it to Centre for Earth Science Studies (CESS) scientists who converged on the area later in the day. Samples were taken to labs in Thiruvananthapuram for analysis. They revisited on July 29 to get eyewitness accounts. Dr S. Sampath, the investigating scientist, narrates the sequence of events: "On 25th morning, people heard a thunder-like sound which was not attended by any flash of lightning, shock or vibration. This was followed by rainfall after about two hours and it was red in colour. It lasted for 15 minutes and the subsequent rain was normal. This means that between night and early morning, some material was infused into the atmosphere and the sound had something to do with it."

The samples were filtered and the resultant sediment was sent for chemical analysis. But a physical analysis of the filtrate and the site shows as if around 1,000 kg of the red powder was strewn across a square km area. Conclusion: such a huge quantity of powder cannot be deposited by anything other than a meteor that exploded over the area. The scientists reasoned that with monsoon rains on, such a huge amount of dust cannot possibly be kicked up from a wet surface. This effectively eliminated tectonic activity as a source. Factory emissions too were ruled out on the grounds that it would require a factory to explode for such vast amounts of dust to fill the atmosphere in this fashion.

CESS scientists have now firmly settled on the meteor theory—the rain samples collected suggest that a meteor exploded into a cloud of dust over the Changanassery skyline, settling the dust at a relatively low altitude. By a strange coincidence, the explosion was quickly followed by rain which washed the debris down in red showers. The scientists believe that it was a combination of factors involving low-hanging meteoric debris and coincidental rains that produced the rare spectacle.

But the state's scientific fraternity is not at peace with itself over this explanation. Some associate the showers with tectonic activity. Sampath offers a strong counter: "If an earthquake can release one ton of material into the atmosphere, there must be a visible crater that emits this. Also, if this quantity of material is thrown up from below the surface, there is bound to be a vibration on the earth's surface that is bound to be felt by the people in the area. No such thing happened in Changanassery. Besides, in places where earthquakes have occurred, no such deposits have been noticed."

The argument promises to endure, at least until the chemical analysis results are out. But for the public, it has been a season of freak geological occurrences. When the red showers descended on central Kerala, cess scientists were already addressing another mystery involving collapsing wells—people have been waking up to find that their wells have either dried up or simply caved in and filled with mud.In the past month-and-a-half, over a 100 wells have been obliterated in this fashion across the state. Scientists are blaming it on the weak linings, rainfall intensity, groundwater pressure and reactivation of tectonic fault zones.

But nobody is really sure.