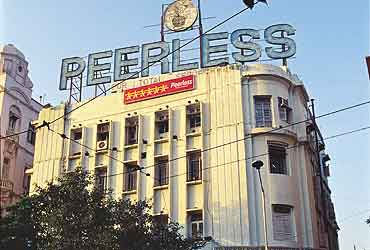 outlookindia.com
-0001-11-30T00:00:00+0553
January, 1996. The then West Bengal chief minister Jyoti Basu was in a bind. He knew his party, CPI(M), which had ruled the state for over two decades, could lose in the forthcoming national and state elections because of one minor, irritating factor: Peerless. Well, on the face of it, Peerless was just another finance company that had been in operation for over six decades (now seven) and had nearly 5 crore depositors. After a Supreme Court order, it had reached a state of bankruptcy and there was little hope for its revival. But closing it down could spell doom for the CPI(M).

As Jyoti Basu realised, there were lakhs of middle- and lower-class Bengalis in rural and semi-urban areas who had invested their life savings in Peerless. In addition, half of Peerless agents (who were also investors) came from among village school teachers, who formed an integral part of the party's cadre. So, if all these people lost their money, the CPI(M) could end up alienating a sizeable chunk of its vote bank. The Communist leaders also remembered a precedent: a few years ago when a smaller finance company had similarly gone bust, the middle class had sought its revenge by making sure that the then state finance minister, Ashoke Mitra, lost his seat.

It was this desperation that forced Basu to seek the advice of Manmohan Singh, the then Union finance minister who, as the iconic initiator of the Congress' liberalisation programme, was no particular favourite of the CPI(M). The two approached D.N. Ghosh, who had earlier worked in companies like L&T, to set the Peerless—and, hopefully, the CPI(M)'s— house in order and prevent it from going bust. Although, in retrospect, Ghosh says he accepted the company's chairmanship "against my better judgement", he created history. In fact, the resurgence of Peerless is one of the most remarkable stories in India's corporate history.

To give the readers a sense of what has really happened in the past eight years, here are a few facts. In 1996, thanks to the SC order, Peerless was slapped with a deferred liability of Rs 771 crore, which completely wiped out its net worth. It was incurring huge losses; in '95-96 alone, it incurred a loss of Rs 109 crore. Today, it has bounced back into the black, wiped out its liabilities, and earned a whopping net profit of Rs 501 crore in 2001-02. Moreover, annual collections, which had been stagnating around Rs 350-400 crore, have now zoomed to Rs 901 crore.

One of the first steps Ghosh took was to rope in two well-known professionals—a former Lever hand, S.M. Datta, and ex-sbi chairman D. Basu. "I realised that tackling the sea of problems single-handedly was impossible," admits Ghosh. The trio then decided that the three priorities for them initially would be recoveries of loans (handled by Ghosh himself), getting rid of dud investments and seeking more profitable options (Basu) and dealing with the maze of hundreds of loss-making subsidiaries (Datta). S.K. Roy, Peerless' MD whose father had founded the company, gave unstinted cooperation to the new team.

Simultaneously, Ghosh knew he had to prune costs drastically. One of the main tasks was to get rid of most of the 4,500 employees. But this was a sensitive issue in the red bastion. So, Ghosh told the then CM this would be crucial to Peerless' revival. Company sources indicate that Basu assured Ghosh that while he may not be able to support him publicly, he would back him to the hilt. "There'll be a lot of outcry and protests but, in the end, it'll all die down," the CM promised. That's exactly what happened. In '99, the unions agreed to a vrs and 2,800 employees accepted it. And annual salary costs came down from Rs 89 crore to Rs 55 crore.

Another area of concern was to reduce the agents' commission and boost collections.Prior to 1996, agents were paid a 22 per cent commission on new deposits, and much less on existing ones. Therefore, the agents were more interested in seeking new depositors, and wouldn't bother about servicing the older ones. Not surprisingly, most deposits lapsed within 2-3 years. To change this, commissions on new deposits were reduced to 5 per cent. At the same time, while retaining its traditional base in rural and semi-urban areas, the firm decided to pursue a new breed of customer, the high-income urban family.

But to achieve that objective, Peerless had to come out with new products that would appeal to this class. As Ghosh puts it, "We have to differentiate our products from our competitors and offer various value-added options." Adds Jayanta Roy, the only son of S.K. Roy who's also the company's vice-president: "We are offering a number of value-added, co-branded financial products along with assured returns." For example, its Life Saving Bond is a three-year fixed deposit scheme with a six per cent interest. In addition, Peerless offers life insurance cover up to Rs 50,000 for both natural and accidental death. Peerless Multi Protector is also a three-year saving scheme with free medical insurance cover up to Rs 1 lakh against critical illness and Rs 50,000 against accidental death. Explains Jayanta Roy: "These schemes highlight our thrust on value-addition with maximum liquidity."

The result is that annual collections have soared. What is really commendable is that despite the sharply declining interest rates and fluctuating financial markets, Peerless has managed an overall yield of 13-14 per cent in 2001-02, up from 12.96 per cent in the previous year. Mind you, this yield is despite the quite conservative mindset of the company, which invests over 90 per cent of its funds in securities approved by the Reserve Bank of India. As Ghosh explains, "We invest keeping in mind that we have guaranteed an assured interest to our depositors. But due to the fall in interest rates, our margins are under pressure. To overcome this threat, we have to grow volumes, as we are now doing." What he's implying is that Peerless does not take risks. That's a point accepted by Jayanta Roy who admits, "My father and I are conservative and the protection of our depositors' funds is our sacred duty."

Clearly, that wasn't true in the 1990s and that's why Peerless nearly went down under. In fact, it was a combination of reckless lending, inefficient operations and taking out money through dozens of subsidiaries that was responsible for the sad state of affairs at Peerless in those days. If only the Roy family had been as careful as it is today, Peerless wouldn't have needed a D.N. Ghosh at all.