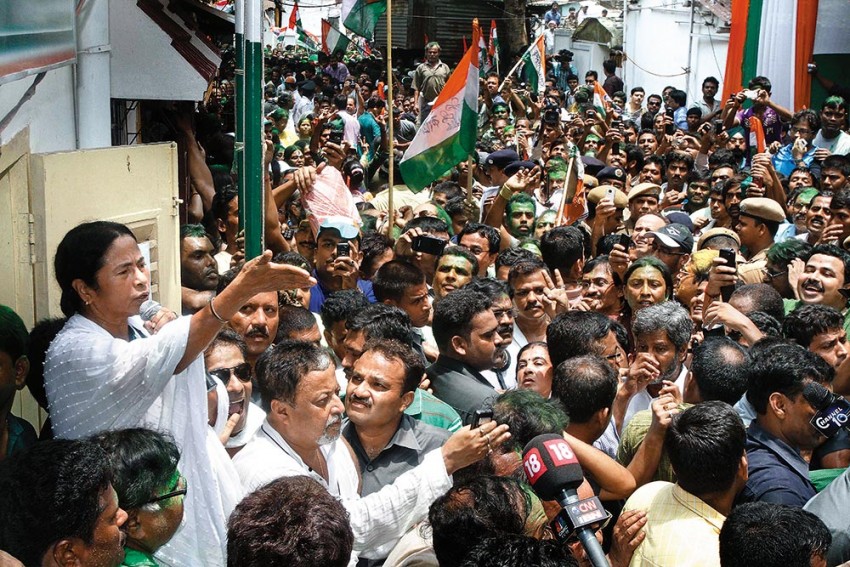 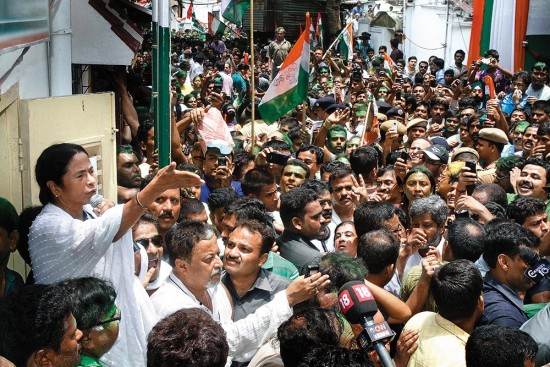 It was a hot day in August 2008 and Trinamool Congress founder Mamata Banerjee had just delivered a fiery speech against the state’s CPI(M) government. The issue was Singur, the venue too. The farmers in the small town 40 km from Calcutta had faced the administration’s forceful land acquisition for Tata Motors to set up a ‘Nano’ car-manufacturing unit. The Opposition Trinamool had constructed a makeshift stage blocking the entrance to the factory gate, from where Mamata launched a 16-day, non-stop protest rally.

Speech over, as she settled down for an interview to Outlook, Mamata turned to an elderly gentleman sitting beside her on a wooden cot perched on the stage. “You see, I am taking everyone along in this struggle,” she told him, smilingly. Of course, she was taking everyone along. From members of Bengal’s civil society to the CPI(M)’s erstwhile supporters, the masses. So why did Mamata single out this particular supporter in her entourage of protesters who eventually drove Tata out from Bengal, followed closely by the CPI(M) government itself?

The answer lay in his political identity. He was a Naxalite, a political breed that was supposed to have been wiped out from the face of the state, when the rulers “brutally” crushed their “armed struggle” of the late 1960s-early 1970s. Brutally, because it had so completely captured the imagination of the Calcutta youth and its intellectuals that the administration, unable to distinguish between who was a Naxalite and who wasn’t, started making random arrests with the police getting the green signal to “shoot at sight”.

Late Siddhartha Shankar Ray, who was entrusted by Indira Gandhi to look after Bengal in 1971 when the state was put under President’s rule, during the peak of the Naxal movement, said that the order was iss­ued in self-defence. “I told them (Bengal police) ‘Don’t wait for them to kill you’,” Ray, who bec­ame CM after the assembly polls in 1972, told Outlook in 2009.

The truth is Naxalism was far from dead. Sure, its heyday, at least in Bengal, was restricted to those first few fitful years since its inception in May 1967, when they went on the rampage against “the class enemy” across the city and state. Many of its leaders were jailed, killed off or they simply died of disease or old age. But Naxalism survived, even if in vas­tly mutated forms. It became clear time and again, especia­lly during periods of political transition such as the one in which Mamata dethroned 34 years of Left rule. Trinamool insiders even stated the transition would not have been possible without the Naxals.

Musician-activist Kabir Suman—one of the most visible faces of civil society who backed Mamata and even joined her party to become an MP in 2009—publicly declared the use of Maoists in two recent resistance movements. Maoists—a Naxal outfit that adheres more closely to its original ideology of violent struggle than many of the other current offshoots—played their role in the anti-land acquisition agitations in Singur and Nandigram (where a chemical hub was proposed in fertile farmland) to counter a state crackdown. Koteshwar Rao, or Kishenji, the leader of the Bengal faction of the Maoists, had repeatedly told reporters that he had extended his help in what he had termed were “revolutionary people’s agitations.” (He was killed in an end-2011 encounter with police, a couple of years after Mamata came to power.)

Mamata and her Trinamool have for the most part treated these claims with disdain, choosing not to reply. While Mamata distances herself from the Maoists and whatever connections she may or may not have had with them in the past, she is openly welcoming when it comes to Naxals.

The CPI-ML was the lone Left party backing Mamata, who after all was fighting an enemy of a combined Left, comprising the CPI(M), CPI, Forward Bloc and the Revolutionary Socialist Party of India. For, land is at the centre of the Naxal ideology, says CPI-ML leader Santosh Rana, in the context of the Singur stir. Two of Mamata’s closest confidantes in the party are ex-Naxalites: lab­our minister Purnendu Bose and Dola Sen, who was given a Rajya Sabha membership by Mamata. 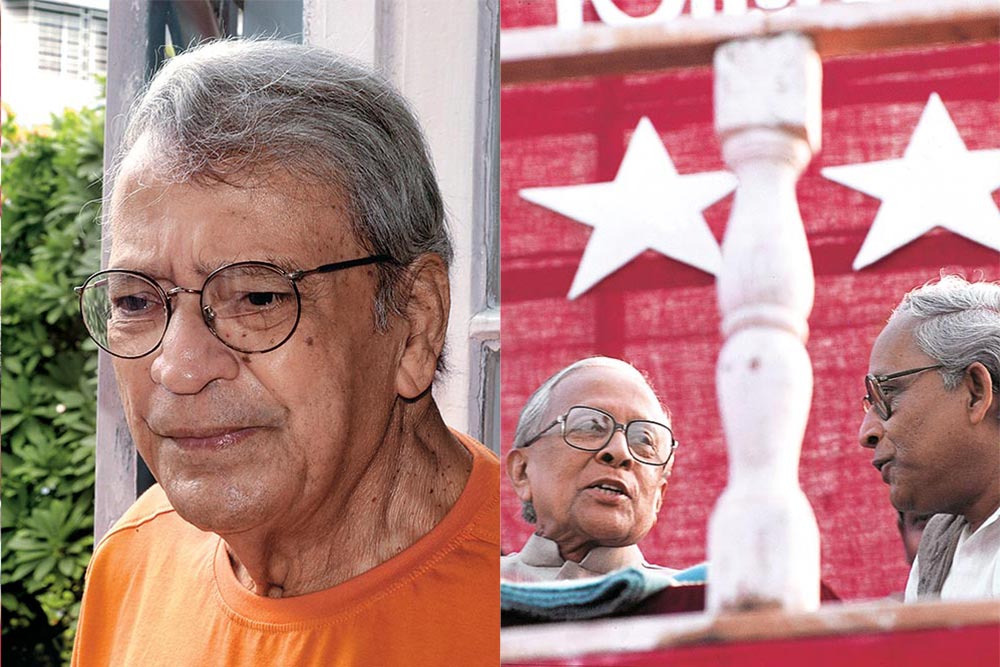 Sen speaks of a need to distinguish between the different Naxalisms today. “Naxalism has not remained static, but has evolved over the last 50 years,” she tells Outlook. “While the ideology of Naxalism is rooted in struggle of the masses against exploitation and oppression, methodologies and tactics have undergone vast changes. In our experience, violent uprisings have had their day. The formation of unions to address grievances has proven effective in urban areas. In the rural areas, the Mamata government’s welfare schemes have been very successful with the people.”

In other words, there is a conscious—or at least outward—rejection of violence. Interestingly, old Naxalite leaders stop short of spelling it out possibly because it would question the very core of their philosophy: ‘armed’ struggle. While Ashim Chatterjee aka Comrade Kaka calls today’s violent Naxalism (that is Maoism) “social terrorism” or killing without the res­ponsibility of seeing the revolution through, Rana, 73, questions the very direction it is taking, pointing out that the Maoists in the Bengal jungles were killing poor peasants and tribals they were supposed to represent.

Fifty years ago, when Naxalbari first happened, these leaders had gone underground, mobilised mass class annihilations, had been imprisoned and eventually acquitted. Of late, they have concluded it is more effective to stay in the system and fight its evils using the laws.

In fact, here the Communist Party of India (Marxists) comes in with what could be its “we told you so” moment. From its inception, the CPI(M) rejected the Naxalbari line of radical leftism, resulting in a split and the formation of CPI-ML. In 1977, the CPI(M) put to test its reliance in parliamentary democracy by capturing power in the state with a landslide victory. It was even able to achieve the end envisaged by the Naxalites—“land to the tillers”—with a reforms policy that was more successful without any “class annihilation”. The CPI(M) can even legitimately claim to have made the need for violent uprisings for land redundant.

The CPI(M) stayed in power in West Bengal for 34 years, piggyba­cking on this land policy. Perhaps, if it did not try to take land away from the people as it did in Singur and Nandigram, it would have continued to do so. This is why Mam­ata has stuck to her own land policy of “no government intervention in land acquisition for industries.”

That brings us to the question: But what of the Communist Party of India (Maoists)? Didn’t these ultras among the Far Leftists, too, play a significant role in shaping the current political scenario in the state? There are indicators they did. Even if they, say, did not in any way assist the Trinamool-backed people’s agitation in Singur or Nandigram as alleged, they seemed to have kept up a parallel fight against Mamata’s arch enemy, the CPI(M), depleting them of strength and keeping them engaged otherwise.

In 2008, Maoists ambushed a convoy of then CM Buddha­deb Bhattacharya, who was returning to Calcutta after inaug­urating a steel plant in the jungles of West Midnapore, in a bid to assassinate him. When a police crackdown followed in the jungle villages, a counter-offensive by Maoists killed nearly 250 CPI(M) supporters. In 2009, Maoists captured a police station in nearby Lalgarh, prompting the state to finally send in a heavy deployment of police, followed by reinforcements of paramilitary forces from the Centre. Beset on all sides, the CPI(M) apparently buckled under pressure and lost the fight. In the 2009 parliamentary polls, it went from 34 of the 42 seats to 15. Two years later, it conceded defeat to Mamata. But, in the end, the emphasis on land, that seems to be the key to staying on in power in West Bengal, is a Naxal legacy.

The Resistance Of Campus ‘Naxals’