The Congress-led coalition will realise the potential of economic reforms, precisely because of the Left 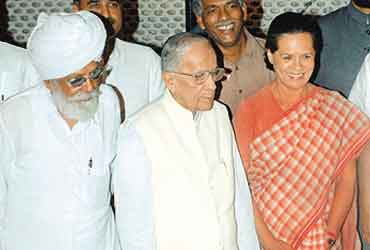 outlookindia.com
-0001-11-30T00:00:00+0553
Talk about strange bedfellows! Over 10 years ago, when the country was witnessing its first troubled brush with reforms, the man who is now India’s 14th prime minister was the Opposition’s enemy number 1. The term that the Left used to describe him was not much better than what it had for Deng Xiao Peng, "running dog of market capitalism". Today, both have undergone a change of heart which has not only brought them together in the same government, however reluctantly, but also softened their individual economic visions to allow a comfortable jigsaw fit.

It’s a change the economy will take some time to absorb but even the worst fears indicate that this uneasy combination will not break the Budget. The stockmarket’s irrational panic as last week unfolded and a similar exuberance the next day reflected this. While it was clear the previous week that some people had ended up backing the wrong party and like the BJP, were acting as poor losers, the two-day drama last week also mirrored the palpable uncertainty about the future of the reforms on the part of investors, foreign and domestic, who had put their faith and money in a country that seemed poised to be the next economic superpower. The statements made by some Left leaders on bringing back a welfare state at any cost heightened that uncertainty.

In the week of the results, the surprise along with the Left factor led the market to close 6.11 per cent down. On Monday next, fears of Left intervention in winding up the disinvestment ministry contributed to a record intra-day drop of 843 points. Volumes were low, the exchange had to be closed twice, and only after some buying by the FIs did the Sensex claw back to end 565 points down at 4505. Says Nikhil Vora, VP, SSKI Securities: "The meltdown wasn’t surprising but the extent is definitely alarming." sebi records show that FIIs sold worth more than Rs 1,100 crore on May 13-14.

What calmed the markets? Manmohan Singh’s statement that he wouldn’t lose sleep over the stockmarkets or talks of Sonia Gandhi abdicating in his favour? Probably both. Some pacifiers from those who would form the government were urgently needed. Says Vora: "I think we’re not hearing enough people who are in government while those who are away from power are making irresponsible statements." K.R. Choksey of KR Choksey Securities adds: "The new government must give us the confidence that this momentum will stay." On Monday, FIIs sold only Rs 83 crore net, and then it was just rise and rise. The right signal had been sent to the market and world. Says Arjun Malhotra, chairman of the US-based software firm Headstrong: "Everyone, even outside India, is now feeling a lot more comfortable and the markets have reflected this. Everyone was scared that the Left would derail growth but Sonia has sent a tremendous signal to foreign investors that the government is serious about growth and wants to put the country in able hands."

But has the Left scare really been sidestepped? Till the arrival of the common minimum programme (CMP), the chapter doesn’t seem closed. Says Amit Mitra, ficci secretary-general: "The Left is the big uncertain element in the economy. Once the CMP is out, the markets will stabilise. Disinvestment and FDI-related issues will always affect the market and have a long-term impact on the economy." Agrees Shashi Krishnan, CEO, Cholamandalam Asset Management: "It (disinvestment) is uppermost on people’s minds today." But even as the first draft of the CMP is in circulation, the expectation is that it’ll be more sound and fury than precise words that signify a reversal on the issues that are worrying a section of the economy: privatisation, subsidies, fiscal deficit, I-T, FDI and debt write-off.

Let’s take disinvestment first. The Congress manifesto is just an echo of the privatisation that is happening in West Bengal (see box) today: sell basket cases, keep profit-making ones. That apart, we’ve hardly had any privatisation worth the name. As is clear from the chart, disinvestment income made a difference to the Budget (and fiscal deficit) only last fiscal, when the amount raised was more than the total of the previous five years. Also, most of this privatisation was cosmetic. Worse, somewhere along the way, we forgot that the original aim of disinvestment was not to balance the books but infuse competitive efficiency and private management skills into the public sector.

Even in subsidies, the extreme fear that food subsidies will balloon with a relook at the PDS is a myth. Why, it might even cause subsidies to finally reach the real beneficiaries. Says Subir Gokarn, chief economist, CRISIL: "Subsidies are a legitimate instrument of welfare. If we target subsidies more effectively, eventually the level of subsidies will come down."

The liberal economist’s view is echoed by jnu professor and Marxist economist Prabhat Patnaik: "Food subsidies are defined largely in terms of FCI losses. Food subsidies are high not because food was distributed cheap but because it was not distributed. Jacking up PDS prices will be counter-productive in controlling subsidies. But if you enlarge the scope of the PDS and encourage rural employment, food subsidies will come down."

Patnaik is right because one reason why, even with retargeted PDS, food and fertiliser subsidies have almost doubled in the past five years is the enormous cost of holding grain. Second is the severe 2002 drought which caused the subsidy to rise 50 per cent that fiscal as foodgrains were used for drought relief. If this is not reforms with a human face, what is?

Why won’t more of such reforms bust the Budget? Here’s how. Assuming that the entire disinvestment target is lopped off the Budget target, 2004-05 will still end with a 4.9 per cent fiscal deficit. Add a few thousand crore to subsidies and plan development outlay (for irrigation, education, etc), it would still not go beyond, like the Hindu growth rate, the average 5.5 per cent we’ve become so comfortable with. Anyway, isn’t this what most analysts have been shouting themselves hoarse for so long, that public investment in development infrastructure must rise?

Says a senior Planning Commission economist: "We need growth and low fiscal deficit in a good year so that it can give us the flexibility to spend in a bad year. That is the essential principle of working in a business cycle, why should the economy function differently?" The fear that income taxes may be raised to mop up development funds should be tempered by the fact that Singh was the first to initiate I-T reforms. Says Shubhashis Gangopadhyay, director, India Development Foundation: "I doubt whether income tax will be raised, at least not at the lower levels. But the remaining Kelkar panel recommendations would be seriously looked into." Ending all exemptions is definitely a better way to raise money, yet tax the rich middle class to keep the Left happy.

Even the Left hasn’t really talked of income tax, but of taxing the rich. Says Patnaik: "It’s necessary to tax the whole of the service sector that’s contributing a lot to the GDP. Besides, there is hardly any asset taxation. In the western world there is substantial wealth taxation as opposed to taxing income flows. Even a small percentage of tax here will yield huge revenues. This is the way of reducing fiscal deficit and not by disinvestment alone."

There has been yet no murmur by the Left on FDI on which the Congress economic vision is rather radical. In a recent interview with Outlook, Singh had said: "Except for defence and environment-related sectors, and where there is a fear of monopoly, the rest is open to all to invest. Through the RBI or the market. No limits whatsoever. We don’t have a control fetish." Complement this with what he told the media on May 19, that the CMP would be growth-oriented and progressive, and create an investment-friendly environment, and even FDI’s future looks less bleak.

If there’s a thorny issue, it’s the Left’s demand for state debt write-off. Ironically, its leaders forget that the Left-supported UF government, by allowing a partial implementation of the Fifth Pay commission report, was responsible for this bankruptcy. Even here, there’s no reason why the low-interest regime wouldn’t help the states, as it has the Centre. Says V. Ananth-Nageswaran, director, Credit Suisse, Singapore: "Due to successive droughts, rural India hasn’t felt the gains of growth, rising reserves and outsourcing. But it’s impossible to do anything meaningful for rural India with a bankrupt state and ideology. If the communists fail to recognise this, none would be a better friend of the Americans."

Still, the Left is much less of a challenge to Singh than the uncomfortable majority his coalition will enjoy in the 14th Lok Sabha. The main opposition to disinvestment stems from the fear of large-scale unemployment occurring from change of ownership or VRS. Any average Indian family would endorse it. Yet, don’t forget that LF-ruled West Bengal has banned strikes in IT where it wants to catch up with southern states. Singh also says that reforms would stress on providing education and health for all, a better environment, housing for slum-dwellers and increased agriculture production. That’s the unfinished agenda of ’91-96. If he can manage to do all this while keeping the economy on reform course, who’d quibble on how he achieved it? No power on earth would now be able to stop a reformer whom destiny has given a second chance.