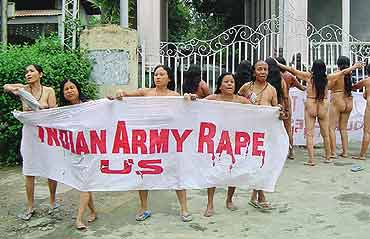 The violent public protests have come as a deep embarrassment for the security forces. Photographs of a dozen women activists in the nude protesting the murder outside the headquarters of the Assam Rifles have become symbolic of the public outrage against the act. Manorama Devi's killing is being cited as yet another example of the high-handedness of the security forces. Imphal has never been the same since that July day.

Violence threatens to erupt in the city without notice. On August 3, things looked relatively peaceful. But all of a sudden, there was hectic police bandobast. Roads were blocked with barbed wire barricades and the paramilitary was out in strength. That was because groups of students and youth converged on the streets and staged a sit-in on the road that Congress chief minister Okram Ibobi Singh, returning from New Delhi, was to take. Rubber bullets were fired and the protesters were lathicharged and dispersed. At least 100 protesters were injured and an elderly man collapsed and died. All this happened on a single day. Since the upsurge began, about 500 protesters have been injured and several government properties set ablaze. The people's anger just refuses to die down.