Is he Robin Hood or just a plain goon? Whatever, he's a minister now. 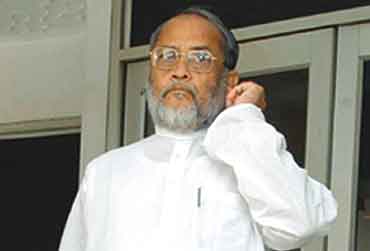 outlookindia.com
-0001-11-30T00:00:00+0553
Minister of state for heavy industries Mohammad Taslimuddin’s police record is longer than his entry in the Lok Sabha Who’s Who. He has been charged with a variety of criminal offences, most to do with perpetrating violence against public officials, covering a period between 1982 and 1998. That hasn’t prevented him from successfully pursuing a political career. If anything, it has helped. In his home district of Araria, he’s seen as a dispenser of rough and ready justice, a man who can whip erring public servants into line.

If you inquire about the slew of cases filed against him in February 1986 by public officials, you may be told they are all "political". One of the cases apparently relates to his roughing up a doctor who had refused to attend to a patient. Another relates to his protest against an errant assistant engineer. Yet others relate to his scraps with a police official and a local magistrate. A pattern emerges: government officials being strong-armed by a local heavyweight.

While Taslimuddin has tried to project himself as a kind of Robin Hood, taking up cudgels against the government of the day on behalf of the common man, the courts felt the cases were valid and took cognisance of the chargesheets against him. What’s more, several of the charges—including attempt to murder—were framed against him during the tenure of his own (RJD) government in Bihar.

"Had I been a criminal," says Taslimuddin, "I would not have consistently won elections since 1969." The Kishenganj MP proudly asserts that he was part of the JP movement. He claims former Bihar chief minister Karpoori Thakur had offered to make him a parliamentary secretary, but he refused. In 1996, he was made a minister in the United Front government—indeed, he was minister of state for home—but was sacked by the then PM H.D. Deve Gowda to avoid controversy. Says BJP MP Sushil Kumar Modi, "Taslim had to resign on account of the charges against him. Those charges still stand. How can he be made minister again?"

Ironically, NDA convenor George Fernandes was one of Taslimuddin’s strongest defenders back in the 1980s, when they were in the same party. At the time, he had described Taslimuddin as the hapless victim of a police vendetta. Former Union ministers Nitish Kumar and Ramlakhan Singh Yadav had both batted for him in the state assembly, protesting against the attachment of Taslimuddin’s property when he was absconding from the law. The boot is now on the other foot, as the NDA heckles him in the Lok Sabha.

With Faizan Ahmad and Subodh Mishra

The Life And Times Of Your MP-At-Large