He may look suave, urbane. But peel off the aloe vera mask and you find the same old braggadocio, objectifying of women and male chauvinism. 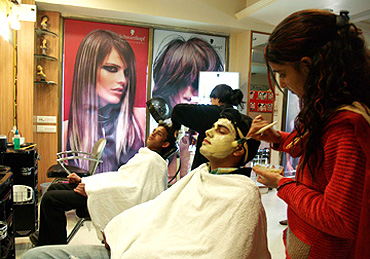 "A small town is a place where there's no place to go where you shouldn't."
—Burt Bacharach, American composer and pianist

Jaipur. A schizoid city. Neither fish nor fowl. A city on the cusp of modernity. A place of inchoate yearnings, small-town dullness, repressed sexuality, provincial cruelty. Where people knew who you were having sex with even before you lit your first post-coital cigarette! Thirty years on, in a bizarre back-to-the-future turn of events, I'm back in the city I was raised in to report on what had changed. If at all. With the men. With the city.

So, what was it like then? Then it was "baudy building" Jats from rich farming country like neighbouring Sujangarh, Ganganagar; neo-royal Rajput poseurs from the innumerable, minor, impoverished-or-getting-there "thikanas"; a smattering of bania traders' sons (apart from us faceless middle-class regular types that were the floating debris of the in-transit population), who constituted the flower of Jaipur manhood. Manifested and compulsively validated by leering at every passing girl/woman. Any woman in jeans was deemed "available".

Fast forward to here and now. It is midnight. I'm at Tablu: swinging rooftop bar and popular watering hole for Jaipur yuppies at the Clarkes Amber Hotel. I'm chatting up young Rajiv, 25, criminal lawyer's apprentice from (where else?) Sujangarh, and Paramjit, 24, his "praupertie" dealer friend with abundant pectorals. Both very distracted. By the pectorals of the young, happy Ukrainian girl on the opposite table that are straining at the limits of her lycra top, whose dimpled smile is the stuff of many a Paramjit's wet dreams. "And what, to you, is a man?" I ask him. His voice is thick with unspent emotion, "Someone who f***s as many girls as...