YSR's secret: a sharp focus on agriculture, without deleting IT 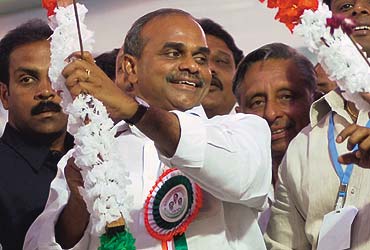 outlookindia.com
-0001-11-30T00:00:00+0553
It was a marathon walk that enthroned Yeduguri Sandinti Rajasekhara Reddy, or YSR as he is popularly known. In the scorching summer of 2003, he set out on a 1,470-km journey on foot across Andhra Pradesh. The effort earned him more goodwill than the Congress had hoped for. Coupled with a promise of free power to farmers and Indiramma Rajyam (an Indira Gandhi-like regime), he cashed in on Chandrababu Naidu's folly of calling for early polls on the mistaken assumption of a sympathy wave following a Naxal attack on him. Nine years of drought and an obsession with infotech proved to be Naidu's nemesis. After an upset win that mirrored the UPA's at the Centre, YSR took over as CM on May 14, 2004. He lost no time in implementing the promise of free power even as despairing World Bank officials and economists saw him depart from their trajectory.

Two-and-a-half years down the line, YSR has more than repaid the confidence the Congress invested in him. Both PM Manmohan Singh and party president Sonia Gandhi are impressed by his performance; he is rated as one of Congress's best CMs. In a quiet, understated way, YSR has ensured that Andhra Pradesh continues to be a favoured destination for private investors while shifting the focus of his governance to farmers.

Bringing the spotlight back to agriculture is, in fact, what has made YSR's chief ministership exemplary. Making irrigation a priority, his government allocated it Rs 3,350 crore in 2004-05, Rs 6,350 crore in the next fiscal, and Rs 10,040 crore for '06-07. It plans to spend Rs 46,000 crore in all. In a state where no new irrigation project was taken up for a decade, YSR has taken up 26 medium and major projects, of which eight are scheduled to be completed in two years. "Even my cabinet colleagues expressed doubts on how I'd mobilise the funds, but I stood firm," he says. Thanks to that, AP is a farmers' domain yet again.

And YSR's government is claiming all the credit. Says finance minister K. Rosaiah: "Of course, it helped that nature blessed us with bountiful rain, but it is the Congress which has helped make agriculture a remunerative profession again." He notes how states like Maharashtra and Punjab have been unable to provide free power, but YSR continues with his seven-hour free power supply to farmers. Further, his waiver of Rs 1,287 crore of power dues has done its bit to curb distress suicides. Farmer lending through the cooperative sector too has tripled to Rs 2,000 crore.

Another area YSR wielded his magic wand in is Bt cotton, cultivated statewide. Monsanto Mahyco Biotec Ltd, the main player supplying these genetically modified seeds, was charging Rs 1,850 for 450-gm packets, of which Rs 1,250 was royalty alone. This when it charges Rs 45 as royalty per sachet in China and Rs 108 in the US. Each acre needs up to two sachets. Monsanto's high rates led to numerous companies selling spurious seeds, at a third of Monsanto's rate: Rs 600 per sachet. The lure proved to be fatal: it was the main reason behind farmer suicides in 2003-04.

This January, the YSR government filed a pil on behalf of the farmers and saw to it that MNCs like Monsanto were indicted by the MRTPC for violation of anti-trust laws in the country and for adopting restrictive trade practices and charging unreasonable royalty. Then, on May 11, MRTPC granted an injunction against the companies, directing them to charge reasonable royalty. Now, the price of Bt cotton seeds cannot exceed Rs 900 for a packet. The belated move has helped check farmer suicides considerably although farmers caught in the debt trap continue to take their lives.

"Irrigation, agriculture and electricity are three departments where the CM knows more than the secretaries heading them," says K. V.P. Ramachandra Rao, YSR's political advisor. His coming from an agricultural family also makes it easy for him to empathise with the farmers, say those close to him. Naidu, on the other hand, had dismissed agriculture as an outdated profession and urged farmers to look for other options. It's another matter that the tdp chief has changed his tune after losing the 2004 elections. 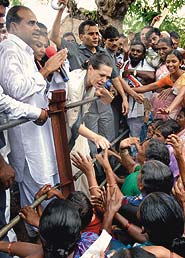 The Congress government, though, is far from antagonistic to what Naidu genuinely initiated. He has built on the growth Naidu generated in the IT sector—if Rosaiah is to be believed, the growth in IT & ITES has been 68 per cent. MNCs too continue to find Hyderabad a cheaper alternative to Bangalore. Industrial power tariff was slashed by 4.1 per cent in 2005-06, and by another 3.8 per cent in '06-07. Coupled with the promotion of SEZs linked to the ports at Visakhapatnam, Kakinada and Krishnapatnam, industrial houses are being drawn to Andhra Pradesh.

Success, however, hasn't gone to YSR's head. He remains accessible to MLAs, party leaders and the common man. He's also not overawed by the visits of world leaders like George Bush or World Bank honchos. In fact, he made his priorities clear to the US president when he took him to the Acharya NG Ranga University to show him the latest in farm and weaving technologies. And when Bush made his way to ISB, Hyderabad, to interact with students there, YSR didn't deem it necessary to accompany him.

What he does not miss are his daily durbars. Starting 8.30 am, YSR spends an hour accepting petitions and listening to his visitors' grievances. He might not do much, but most people seem happy that the CM lends them an ear.

Then there's the case of M. Rajyalakshmi, a Karimnagar student, who got a seat in the Mamata Medical College but couldn't join because of the Rs 8,000 fee. YSR asked the Karimnagar collector to bring the girl to him, paid her fee and ensured she continued her education. It also occasioned the initiation of a scheme whereby banks operate special counters at counselling centres in colleges. Once students secure a seat, they can simply approach the bank for a loan. No surety or background information is needed. The cheque is made out in favour of the college where they are to join.

The Indiramma scheme is another instrument through which the CM has tried to improve the lot of the poor by building houses for them. "We've built 12 lakh houses in two years and 60 lakh more will be built in the coming years," says YSR. "What's more, we don't talk of SC, BC or forward caste here. If after 50 years of Independence, a family does not have a house, there can be nothing more tragic, caste notwithstanding."

YSR, who contested his first election in 1978 from Pulivendula constituency in Kadapa, has never lost an election to date. A five-time MLA and four-time MP, he was opposition leader for long. Now that he is CM, he's trying to use his position of privilege to maximise benefits to the underprivileged. "I am not trying to change the world," he says. "I'm only trying to help people to accept change."