Reading The Map To Delhi

Having lost the ‘federal front’ race to the CPI(M), Didi can only hope for a post-poll alliance 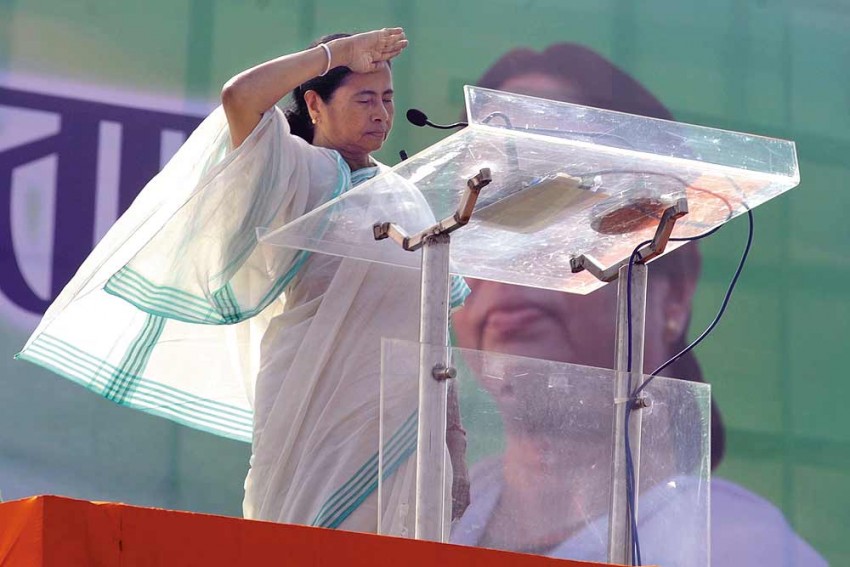 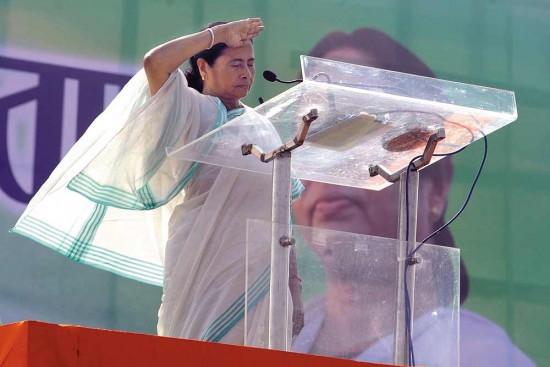 Didi’s Relationship With Other Parties

A placard held aloft by one of her supporters said, ‘Mamata for Prime Minister’. It isn’t clear if the Bengal chief minister could see it from where she stood on a makeshift stage at the Brigade Parade Ground, where a sea of people—14 lakh-plus by her Trinamool Congress’s estimate— turned up to see and hear her launch her 2014 campaign on January 30. What’s clear is that Mamata Banerjee’s speech resonated with the same message of conquest. “Dilli chalo, Bharat goro (Let’s take Delhi, build India),” she thundered, thumping the podium. Bengal, after all, is ours, she said, but there’s no resting till Delhi is stormed.

Distancing herself from both the Congress and the Bharatiya Janata Party (BJP), and without taking names, she conveyed that if Rahul Gandhi was the face of dynastic rule, Narendra Modi was the face of danger—both unsuitable as prime ministers. “We now want poriborton in Delhi too.” Her national-level ambitions became even more manifest with the announcement that her party would contest in all 42 Lok Sabha seats from Bengal. There was not an IOTA of doubt in her about her party bagging all of them. All this seemed like a follow-up to her open call to regional parties across India some months ago, inviting them to unite with her to fight the Congress, the BJP and—does it need to be spelt out?—her sworn enemies, the Communists.

But her ambitious Delhi march is unlikely to prove a cakewalk. She is in a hostile political situation, with virtually no friends to form a workable alliance. “No one responded to her earlier call to the regional parties,” political commentator Tarun Ganguly points out. “Revi­ving the invitation through the recent rally has not only failed, it has backfired.” He explains that her strong message that the Trinamool would lead the charge may have rubbed regional leaders the wrong way. “You won’t catch the leader of any party openly admitting a desire to be prime minister, but it’s unlikely they aren’t nursing those hopes,” says Ganguly. “Mamata’s almost aggressive overtures must not have gone down well with them.”

Confirmation of that couldn’t have come sooner. Indeed, on the same day as Mamata’s rally, CPI(M) general secretary Prakash Karat announced that a ‘third front’—a coming together of the Left parties with regional outfits of a secular outlook—was nearing fruition. He said he’d already met Orissa chief minister Naveen Patnaik of the Biju Janata Dal (BJD) and was to meet Tamil Nadu chief minister J. Jayalalitha of the AIADMK. Less than  a week later, on February 5, after a meeting of representatives of four Left parties, BJD, Samajwadi Party, JD(U), JD(S), AIADMK, the Asom Gana Parishad (AGP) and the Jharkhand Vikas Morcha in Delhi, came the announcement that this group would fight the elections as an alternative front aiming for a non-Congress, non-BJP government.

“No one has responded to Mamata’s invitations for an alliance. Her aggressive signals may not have gone down well.”
Tarun Ganguly, Political analyst

Mamata was kept out. “It’s a CPI(M) ploy to pull the rug from under our leader’s feet. It won’t work,” says a Tri­namool Congress insi­der. Mamata, as is her wont, would readily agree to the conspiracy theory, though party workers ins­ist she is nonplussed. But the fact is that Karat has beaten her in the race to cobble together an alliance; as for how viable Karat’s initiative will prove, analysts say, as anyone else could, that anything is possible.

This is not the first time Mamata has found herself alone. During the presidential elections, Mulayam Singh Yadav had given her to believe he’d side with her but did a U-turn and in the end supported Pranab Mukherjee. The BJP and the CPI(M) too had found themselves tog­ether on the issue. Mamata, alone and alienated, eventually had to accept the decision to support Pranab. Her supporters make a virtue of it: “What’s important is how she turns adversity into her favour,” says one. “She ensured there were no hard feelings between her and Pranab.”

What is interesting, though, is that for Mamata, national ambitions are not a case of trying to make a completely new beginning. As Suman Chattopa­dhyay, editor of Ei Shomoy, points out, she started her political career as the MP from the Jadavpur constituency in Calcutta and went on to become a minister, holding many important portfolios. Equally interesting is that, as a central minister, she was often accused of spending more time in Bengal and Calcutta than in Delhi, her focus then being on wresting Bengal by dethroning the Communists, who had been in power for three decades. 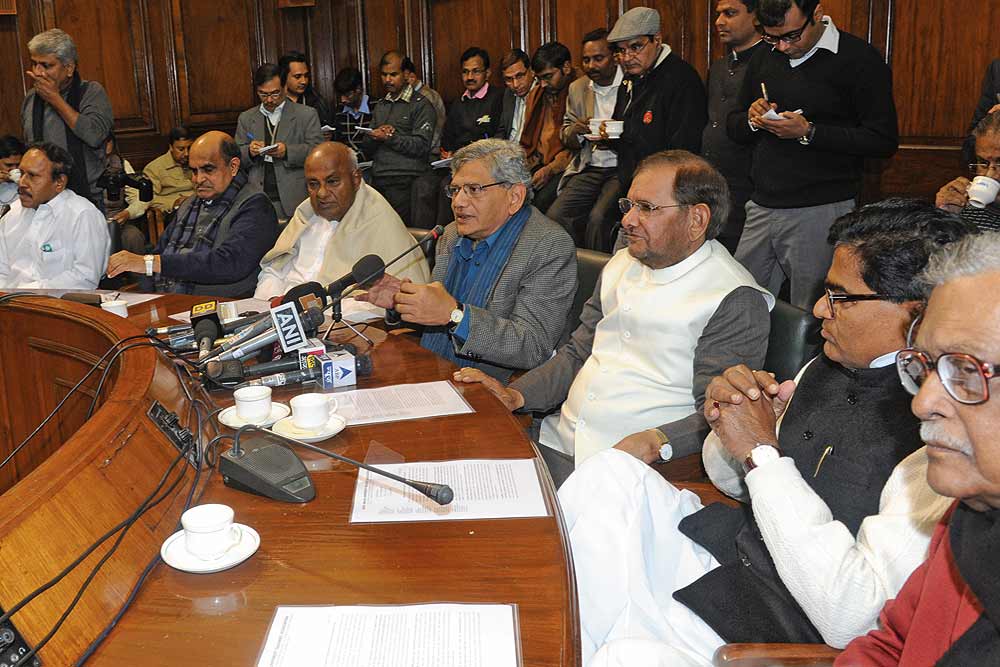 So far, the Trinamool Congress has not laid out its strategy for being in power in Delhi or considered the arithmetic, beyond aiming for all 42 seats in Bengal. But pundits predict that the party could get about 10 seats more, taking its Lok Sabha tally to 30 or so. “The Trinamool Congress has won successive elections­—the last Lok Sabha election, the assembly elections, the municipal and panchayat polls. This trend is attributed to many factors, but to a great extent to the anti-Left sentiment. But if there is a resurgence of the Left, they may gain,” says Ganguly.

But Mamata’s rivals say she might after all be doing a wait-and-watch, aiming for a more opportunist post-poll alliance rather than making a pre-poll commitment—which leaves her open to tie-ups with both the Congress and the BJP. In fact, the CPI(M) has been daring the Trinamool Congress and Mamata to come clean on the BJP and its prime ministerial candidate Modi, with the taint of the post-Godhra riots on him. “Let’s not forget Mamata has a history of tie-ups with the BJP,” says Moh­ammed Salim, a leader of the CPI(M). “If she has done it in the past, what prevents her from doing it again?”

The expert at the balancing act that she is, Mamata has so far never criticised Modi directly. She didn’t name him at her rally; the “danger face” allows for equivocation, after all. She might perhaps be hoping that her sops to the Muslim community—including the bla­­t­antly populist stipend for imams and education funds for their children—might keep the community on her side. Says Ganguly, “She hasn’t delivered on most of her promises, but if she can, and if she can also keep her votebank happy, she’s unlikely to have any qualms  about joining any party.” The question is: if she ties up with the BJP at the Centre, what effect will it have during the assembly elections two years down the line? In fact, a tie-up with the BJP at the Centre will not necessarily have an adverse impact on the Tri­namool Con­gress in the assembly elections, for which the issues are very different. Mamata will probably not waste her energy thinking about that for now—focusing instead on the Centre.

Modi, meanwhile, has indicated he’s open to a post-poll tie-up with the Trinamool Congress, hinting as much at his February 5 rally in Calcutta. The turnout was about a fourth of that at Mamata’s, but that’s impressive enough, for the BJP has hardly any presence in Bengal. But the fact is that Mamata’s preference is for a tie-up with the regional parties, with whom she’ll have greater leverage than with the BJP or the Congress. The Trinamool Congress may have played its most substantive role in central politics during its tie-up with UPA-II—with as many as 20 MPs and holding the railway portfolio—but Mamata could not make it last. She knows well that she’s no competition for Rahul or Modi. With Jayalalitha, Mula­yam or the bsp’s May­awati, she might still push, pull, fume, play her impetuous best and have her own way.