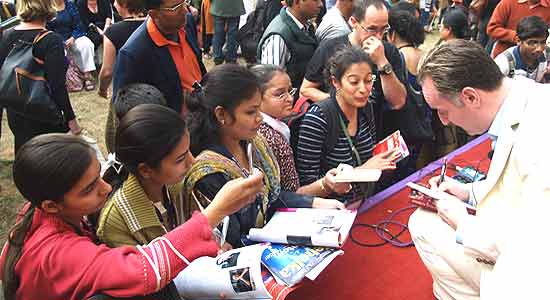 Three years—or five, according to organisers—is perhaps a little young to achieve your ambition. But that’s what last week’s Jaipur Literature Festival just did: turning from a quirky, intimate litfest where literary stars like Salman Rushdie and Vikram Seth famously rubbed shoulders with common readers, into—alas, no avoiding that overused phrase—“the biggest literary show in the world”. The masala mix of film lyricists, actors, prize-winning litterateurs, musicians, best-selling authors, publishers and authors on the hunt, Dalit autobiographers and unknown regional writers was potent enough to draw an incredible crowd of anywhere from 15-30,000 from across India and the world.

For example, in the course of just one sunny afternoon’s mad rush from one standing-room-only tent to the next, I bumped into an old lady from Vancouver, Canada, a publisher from Norway, a researcher from Russia, a long-lost friend from Calcutta, another from Bombay, an engineering student from Jaipur, a neighbour I had difficulty placing, a bureaucrat from Ajmer, a friend’s daughter from Mayo College in Ajmer and another’s son from Bangalore—you get the drift. And this was apart from the usual crowd one expects by now to meet at the litfest—publishers, writers, agents, journalists, celebrity-hunters, cranks and increasingly, litfest addicts.

“We weren’t quite sure if last year’s huge crowds were a freak,” says William Dalrymple, one of the directors of the litfest, explaining why they decided to stick to last year’s plan of holding the sessions in three venues that together accommodate no more than 300 chairs, at best. By Day Two of the five-day fest, the largest venue, the Durbar Hall, had to be abandoned for the front lawns, with writers climbing on to a stage for their panel discussions and readings, abandoning the pretence of cosy intimacy with their audience.

So why does the Jaipur litfest succeed in such spectacular fashion, when so many other festivals it spawned fold up within a year or two of their ambitious launchings? For writers like Booker Prize-winner Anne Enright, “It’s a chance to come to India”. As Dalrymple points out, in contrast to other litfests like Hay-on-Wye, where writers are given two meal coupons and a night’s lodging, “We offer them free air tickets and hospitality for five days—lots of fun, sun and music.”

For old India hands like mythologist Roberto Calasso, an invitation to the Jaipur litfest is irresistible for other reasons: “It’s terribly lively, and has a good mix of people—Indian and European.” Or as French publisher Marc Parent puts it, “It mirrors the mosaic of India, its diversity and contradictions.” Where else, Parent wonders, do you get a litfest which discusses at the same time the days of the Raj with the violence in Chhattisgarh?

The litfest is informal, accessible, with no Sahitya Akademi-like dreariness. Top authors arrive on time too.

Of course, sunny location and a colourful diversity of voices is hardly the monopoly of the Jaipur litfest. What it has, however, are some assets that none can rival. An ideal location, for one—Jaipur is not just exotic enough to draw writers from across the world. It’s also ideally placed, in terms of what is fast emerging as Asia’s publishing hub: Delhi. It’s close enough to Delhi to ensure that all Indian publishers attend the litfest, and far enough for them to be in a holiday mood, making it easier for the real business of litfests: networking. Besides, as the first of the many privately-run litfests in India, the Jaipur litfest has not only received wide international coverage but has also proved that it’s here to stay: invitations and plans start a year ahead, something unheard of previously. You could count among its charms the endearing informality and accessibility, not to speak of the absence of a Sahitya Akademi-like dreariness. No matter how high-profile, writers arrived on the dot of the hour. “Can you imagine,” one frequenter of Delhi’s literary circles exclaimed as he watched the brisk, no-nonsense way sessions were concluded, “if this was run by the government?”

But there are those who fear that its very success may spell its doom. For instance, if it continues to grow at this pace, will it lose its character? “If they get any bigger than this, it will become a mela and they will have to change the venue,” says Girish Karnad, a first-timer at the litfest this year. “But if you shift it to a bigger place, half its charm will be lost.” It’s exactly what happened to Hay-on-Wye, Karnad points out. “The litfest had to move out of the village into the grazing grounds, where you buy tickets for each event.” It’s the same dilemma that faces the theatre, according to him: “You want it to be big enough to reach audiences, but not so large that you can’t see the actors’ faces.”

Others point out that the litfest carries far too much load on its shoulders by trying to represent writers in 22 languages besides English. “There is a case to be made for a litfest where India speaks to itself, but it would be a mistake to make this litfest into that,” agrees Ravi Mirchandani, a publisher from the UK. The strain of trying to do everything in one litfest is already being felt. The Dalit theme as part of the Bhasha series worked well in its place, showcasing a writing that is often neglected. But it can also get a bit bizarre to try and combine a Dalit intellectual like Kancha Ilaiah with children’s writing. To no one’s surprise, except perhaps the conceiver of this panel discussion, Ilaiah ended up hijacking the agenda and turning it into a diatribe on caste politics.

Others point out that the litfest is losing a wonderful opportunity to become a hub for Asian writing, instead of being this mish-mash of international and local. For example, last year at the litfest, Andrea Berrini, an independent publisher from Italy, was able to pick his entire list of Asian writers from the contacts he made at the litfest. This year, he says, he was disappointed to see how it had lost its Asian focus.

However, both the litfest directors—Dalrymple and Namita Gokhale—are emphatic that they are not going to compromise on its three basic rules: free entry to all, no change of venue or greenrooms for even star writers, and a mix of Bhasha and English language writers from here and abroad. “I would be worried if there wasn’t room in Diggi Palace to expand,” says Dalrymple, pointing out that there is a large stable and an open ground within the hotel’s premises which can be turned into additional venues.

Namita is equally certain that the “bipolar” nature of the litfest will survive, no matter how big it grows. “No litfest can be totally representative, but we will try and focus on at least one theme every year.” Next year, for instance, her focus will be on writers from the Northeast.

It’s this enthusiasm that’s perhaps the key to the litfest’s success. “I have always liked to be a bridge, connecting people in the literary world and watching the energy that comes out of it,” she says. As for her co-director, Dalrymple shows me the scroll of names he’s already collected for next year: Orhan Pamuk, Kiran Desai, J.K. Rowling...the show will go on.