It's an acquired taste, but the Far East is the new drool of the rich foodie. Sushi, sashimi, here we go. 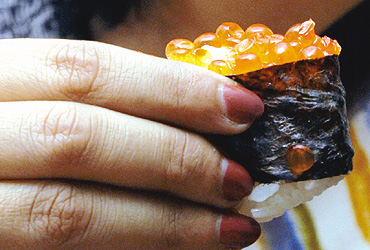 Snapping apart her chopsticks, swirling a spot of wasabi (spicy horse radish) into a tiny bowl of soya, Divya Desai gently dips a slice of totally raw and cold tuna (maguro sashimi) into the wasabi sauce and drops it into her mouth. Eyes closed, after an almost imperceptible chew, she savours the slow slide of naked fish down her gullet. Only after she lifts her lids does this homemaker admit in the privacy of her corner-table at Wasabi, Mumbai's speciality Japanese restaurant: "My craving for sashimi is inexplicable. Though I've been eating it almost every other day for the past year, I just can't get enough of it."

Notorious for its unpredictability, gourmet gravity just shifted once again. Little bites are becoming big business. Call it the rise of oriental minimalism, diminutive dining, or just another food fad, but sashimi and sushi, bonsai bites of raw fish and rice from Japan, along with dim sum, the dainty steamed dumplings from China, are captivating adventurous deep-pocketed eaters. Small food is suddenly the new pan-Asian delectation. Echoing this change, the swish set are abandoning their forks for chopsticks, all to partake of a minimalist feast. It's one that demands both an open mouth and an open mind about foods like toro (raw tuna belly, a prized Japanese delicacy) and Falcon's talons (steamed chicken's feet, a recipe belonging to China's Song dynasty). 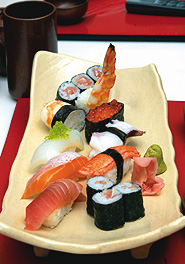 At threesixty°, the world cuisine eatery at The Oberoi in Delhi, more than the enoteca (wine library), the sushi bar is where the action is. Diners here queue up to watch chef Augusto Cabrera turn raw fish into fine art. Unsheathing his knife, he deftly slices yellowtail fish, expertly scoops out 12-15 grams of sushi rice with one hand, adds a dab of wasabi and palms out an artistic nigiri sushi in 10 flying seconds. Since its opening over a year ago, chef Cabrera's contemporary sushi bar is one of the busiest in a city that houses six restaurants with Japanese menus. From importing raw fish worth US $7,000 every fortnight when it first opened, this swanky eatery now air-freights $13,000 worth for the capital's sushi-smitten citizens.

At lunchtime, in another part of Delhi at Nanking, a speciality Cantonese eatery run by third-generation restaurateur Baba Ling, waiters rush about with bamboo baskets filled with har gau (exquisitely pleated prawn dumplings), siew loong pao (a dumpling ingeniously filled with hot chicken soup) and Stalin's Beard (radish in a crisp, ridged croquette). Ranging from savoury to sweet, Nanking offers 26 dim sum delicacies in all, guaranteed to make you forget golden-fried wontons and spring-rolls. A steaming success since it was introduced just over a year ago, a beaming Baba Ling says, "We do up to 200 dim sum covers on winter weekends." This also keeps his dim sum chef, Tan Zianxan, busy in a special 10x12 room, thwacking almost five types of dough (potato, wheat and tapioca starch) into thin wrappers that are stuffed with seafood and steamed, before arriving at your table as tiny pleasure parcels.

In keeping with tradition, dim sum—'little bites that touch the heart'—are offered from noon to sunset. Dating back to the Song dynasty in 10th century China, tea stalls along the Silk Route sold these small bites to go with tea to traders. Recently, award-winning eateries like Royal China in Mumbai, Taipan and The House of Ming in Delhi have also started extending lunch-hours to match their new yum-cha (tea and dim sum) menus. The Tea House of the August Moon in Delhi (with an expanded dim sum menu by late February) sources nine teas from both sides of the Great Wall. This includes Monkey King, paw-picked by trained simians in China's Anhue province (humans can't reach the 15-foot tall tea bushes).

Reading meanings into this trend as perceptively as a tea leaf-reader, Vir Sanghvi, journalist and food writer (Rude Food: The Collected Writings), says: "The Indian upper class catches on to trends after a time-lag of a decade. Conveyor belt sushi chains were all the rage in the west, we now have our own versions. Another reason for the sushi and dim sum craze is that people think it's virtuous to eat steamed dumplings rather than spring rolls."

Calorie-counting yes, but small foods have also become the catchword for style. Every Sunday, you can hear the impatient shuffling of Jimmy Choo-clad feet as socialites wait for their dim sum table at Royal China in Mumbai. Says Farida Tata, a design project manager and fortnightly visitor at this restaurant: "We first tasted dim sum in Hong Kong and loved it. We've introduced most of our friends to paper-wrapped prawn, pork buns and cheung fan (soft pancake roll)." Tinyness also makes it easy to sample new flavours with every bite. 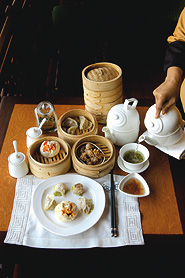 Created through an ensemble of cooking techniques —steaming, pan-frying or deep frying—dim sum is easy to adapt to. Packaging also helps. R.E.D Rare Eastern Dining at the Radisson mbd in Noida bordering Delhi are wooing business lunchers with an Xpress Dim Sum menu. But sushi, where vinegared rice is the master ingredient, is a taste challenge. "Dunk it down is what I did," says Karun Tayal, a Delhi-based steel manufacturer about his first taste of maki (fish wrapped in rice and seaweed). To prevent such turns-offs, chef Cabrera with training chopsticks (joined at the top with rubber bands) offers eaters a guided Japan tour. A taste of tempura, then sushi made with marinated fish, maki rolls and finally sashimi—a slab of entirely raw fish.

Ravina Bhojwani, who runs House of Sushi, a catering unit in Mumbai, says, "Everybody thinks sushi is raw fish...I tell them sushi also can be filled with tofu, asparagus and cucumber." Since opening two years ago, her thermocol-packed and orchid-decorated sushi platters have takers as far away as Pune. Last month, at a Bollywood hunk's sangeet party, everybody shava-shava'ed in between bites of sushi. In Bangalore, restaurateur Mako Ravindran, who opened Harima about a year ago, says his Japanese cuisine does well with the expat community and returning Indian IT professionals, who've picked up sushi addictions overseas. All set to add a 5,000-foot dining terrace to Harima in April, Mako admits: "I'm on an awareness drive."

Both sushi and dim sum are a business where contrasts rule. The fish is flown in, the diners drive in. The chefs have ten years of expertise, the patrons are often uninitiated. Acceptance takes a morsel, but appreciation requires altogether many meals. Not surprisingly, boo-boos are many. "I've lost count of how many people have lost the roof on their head after eating a blob of spicy wasabi," says one chef. Another common mistake is drowning the sushi rice in shoyu (soya sauce). Few know how to spot good dim sum—thin skin that hints at the filling, flavour graduation down the menu, a yin-yang balance of colour and ingredients and artful presentation.

Sanghvi gives his vote to Royal China for their dim sum, Wasabi and Sakura (in Delhi) for sashimi, and 19, Oriental Avenue and threesixty° in Delhi for sushi. Kareena Vandrewala, who calls herself a sushi connoisseur, says stand-alone restaurants like Joss in Mumbai—which offer smoked-salmon maki—"are a cop-out" without raw fish.

That's why some gastro-adventurers who don't want to pay Rs 4,000 for two tabs at five-star eateries, are hitting speciality Japanese grocery Yamato-ya in Delhi. Despite the language barrier, the store now has a 25 per cent Indian customer base, people who want bamboo mats (matzuki), seaweed (nori) and slices of shake (salmon) and magouro.

As for the rest of the Chinjabi market? North Indians have completely succumbed to momos. The Tibetan dumplings, originally filled with meat, are sellouts from summer to winter, stuffed with anything from mushrooms to paneer. Buy them in frozen packets, spot them in rajma-serving dhabas or watch them fly by on wheels, as momo boys make their deliveries. Get your plates ready and set out your chopsticks.

The Chronicles Of Narnia: The Lion, the Witch and the Wardrobe