The ‘normalcy’ of violence—sexual violence being the most perverted—is India’s lot. One girl’s nightmare focuses the light. 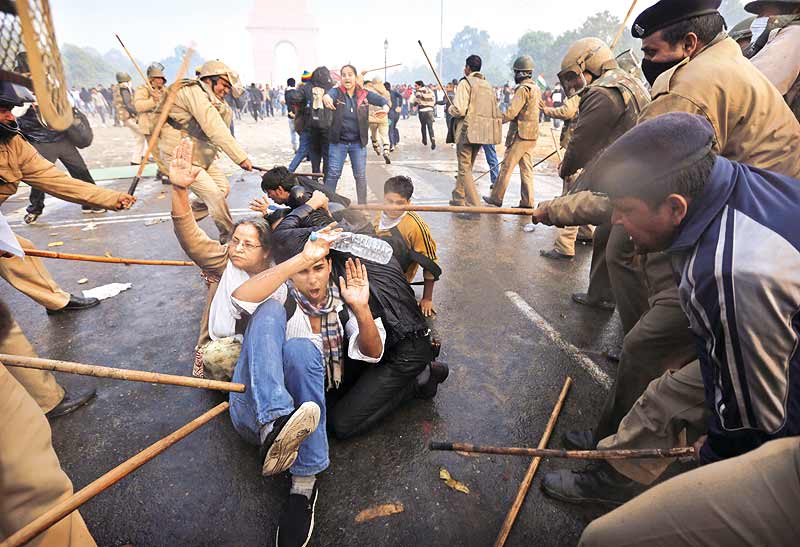 “Didi has always made us proud. Aisa kabhi nahin hua ki hamein unki wajah se kuchh sunna pada. Woh hamare parivar ka garv hai (We never had to hear anything on account of her. She is our family’s pride),” say the two brothers (18 and 20 years old respectively) of the girl whose rape and brutalisation a fortnight ago has stirred the whole nation. They were seated outside her ICU room at Safdarjung Hospital in New Delhi, hours before she was flown out to Singapore for further treatment.

It often takes one crime or individual to be the pivot of an issue that had never hitherto received its due attention. The young girl, who was the victim of brutal gangrape and savagery has become just that: a hero for thousands across the country. As Jagruti continues to fight for a life that will have to be reconstructed with a lot of medical help and her own tremendous will, fighting alongside her is a whole gamut of Indians: from big towns and small, students and professionals, middle-class individuals to activist groups, women, and men. They are marching in protest, holding candle-light vigils, and venting ire on social networking sites. We at Outlook have decided to name her Jagruti: the awakening. She is our woman of the year.

“I feel for this girl from my heart,” says Valerian Santos, father of Keenan, who was killed last year after he and his friend Reuben tried to intervene in a sexual harassment case in Mumbai. “Perhaps more than my son.... I was crying for her.” 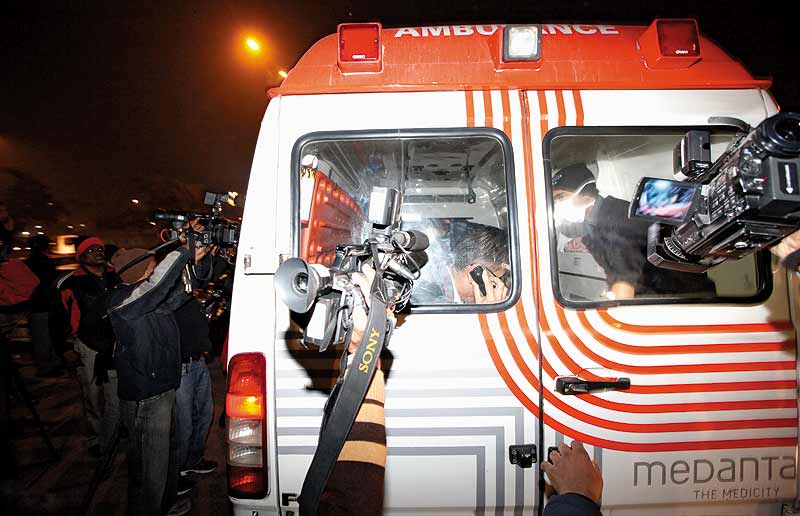 Singapore-bound Jagruti being taken to the airport. (Photograph by Hindustan Times)

Till the other day, Jagruti was like any other ordinary girl, who had gone for a movie with a friend and was coming back home by bus. Her friend’s objection to lewd comments by six men on the bus visited upon her a nightmare from which only death seems to promise an early exit. If she fights off the physical odds, which we hope she will, full emotional recovery will likely take longer. Gratifyingly, Jagruti has shown immense determination so far, telling her friend who was with her through the ordeal, “mujhe sangharsh karna hai (I have to fight)” when he went to Safdarjung Hospital to meet her (see interview).

Rape is a sordid reality in India, in all its gruesome manifestations (see column by Meena Kandasamy), so routine that, most often, it evokes no notice. Jagruti’s case has brought the reality closer home, shaking the indifference of middle-class India, reminding them how vulnerable women are in a world both modern and traditional, a world with antiquated attitudes towards women, a world of strange predators in the guise of men, a world of perverts who prey on children.... 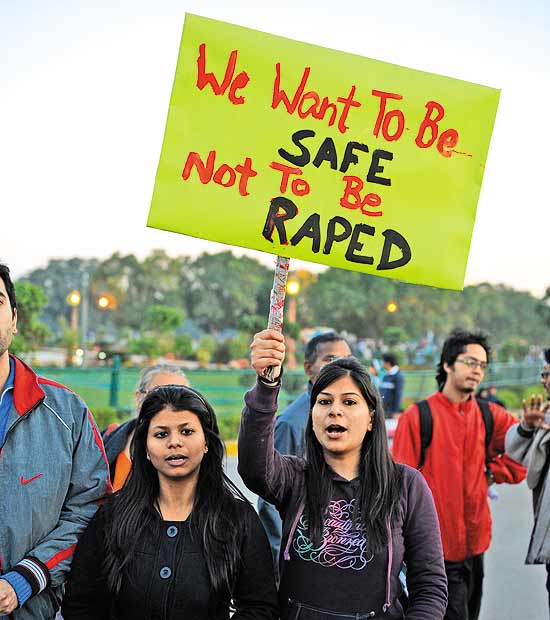 And so the anger erupted. There was the genuine citizen came to express his or her solidarity, along with the curious onlooker, the rabble-rouser and those keen to get a piece of the political and human action. The media kept a constant vigil as  well, both outside the hospital where Jagruti lay and with relentless coverage, in print and on television.

First, the political class treated the protesters as an administrative problem, then they started to deliver political homilies.

A political class with credibility should have been able to strike a chord with protesters expressing human concerns. Instead, they first treated the process as an administrative problem, then started to deliver political homilies. Eventually, the scale of public outrage compelled high offices to speak up: the prime minister on television, the President and the Lok Sabha Speaker, a sitting judge of the Supreme Court. The government also set up several committees to look into the incident as well as the overall issue of women’s safety. Union minister of state for home R.P.N. Singh told reporters that photographs, names and addresses of the rapists will be uploaded on the Delhi police website (www.delhipolice.nic.in). He also said the government-run National Crime Records Bureau had been told to prepare a directory of convicted rapists and upload their photos and personal details on its official website (www.ncrb.nic.in).

But the statistics remain depressing. The young Akhilesh Yadav, on assuming the chief ministership of Uttar Pradesh, had promised to deliver better law and order. In the 10 months of his leadership, 35 cases of minor girls being raped and killed have been registered. There were 1,895 rapes in the state in 2011. “There is no denying that men are getting increasingly insolent in committing crimes against women,” says Arun Kumar, the state’s additional director-general of police. “In fact, the women’s powerline service that we launched to curb harassment of women through crank calls received 61,000 complaints in just one month.”

In Mumbai, the Maharashtra State Commission for Women has been without a chief for four years. “It’s meaningless to have a commission without a head as no one can put pressure on the government to act,” says a former chairperson. “Women actually have no one to go to now.” In fact, fed up with the inaction of the administration and the corruption of the police, victims of sexual abuse in Lucknow have organised themselves under the banner of what they call the Red Brigade. Comprising largely of young girls in the 17-25 age group, they wear red kurtas and black salwars and help victims fight rape cases in court. 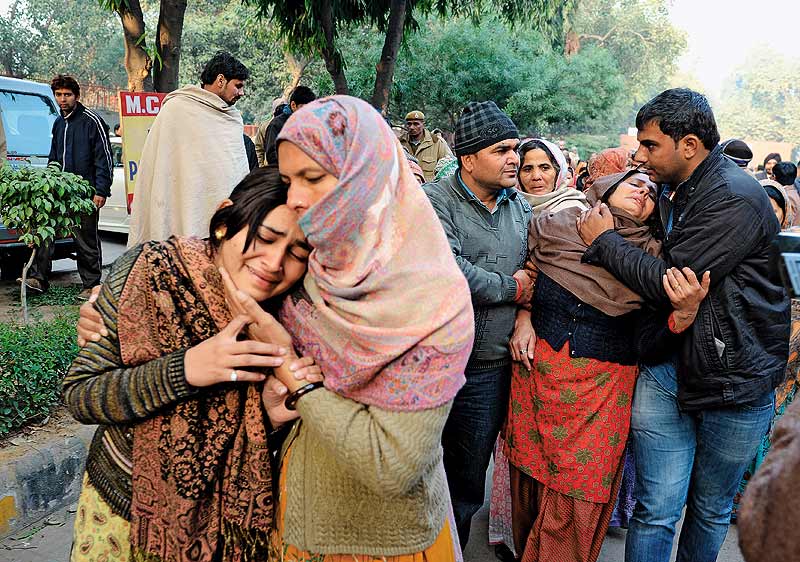 Jagruti’s case has become a lightning rod for all such women across the country. There is outrage in Calcutta as well and as sociologist Bula Bhadra there says, “The act of rape, as the one that happened in Delhi, is the manifestation of a complex social problem which does not have a ready solution. It requires a complete overhaul of the system where we look at many different aspects of society. From the patriarchal content of our children’s textbooks to the manner in which advertisements portray women, society is perennially conditioned to treat women as subservient. Rape and molestation of women in our society is a reflection of this.”

The eldest of three siblings, Jagruti had just finished a four-year course in physiotherapy at a private medical college in Dehradun. Her father, who has a modest job in the aviation sector in Delhi, had sold his ancestral land in his UP village to ensure an education for all his children. He thought himself a “lucky man” as his children were the first generation to be educated in his family. His daughter was doing her internship before she would start her career as a paramedic.

She was alert, say doctors, when she was brought into emergency at the All India Institute of Medical Sciences before she was taken to Safdarjung Hospital. Her state had left even the hardened doctors shaken. The unspeakable acts of bestiality had ruptured her intestines and damaged her reproductive organs. The doctors did not think she would survive the night. At the time of writing, she has survived a fortnight.

Her condition looked “positive” in the first three days, with her being able to communicate clearly with the doctors through writing. She told the doctors that her throat felt itchy with the ventilator. She had written—“there is irritation in my throat, please clean it with suction”—according to Safdarjung Hospital medical superintendent B.D. Athani. A paramedic herself, Jagruti perhaps understands her situation better. She has had to give her statement to the subdivisional magistrate twice, partially in writing, with gestures and responding to questions.

However, once the infection spread, her condition deteriorated, with doctors claiming that the iron rod inserted into her body could lead to septicemia. She has already been through three major surgeries in the last 10 days, one in which most of her large intestine had to be removed. Then she developed respiratory problems and suffered two cardiac arrests. She was critical before being flown to Singapore for organ transplant. 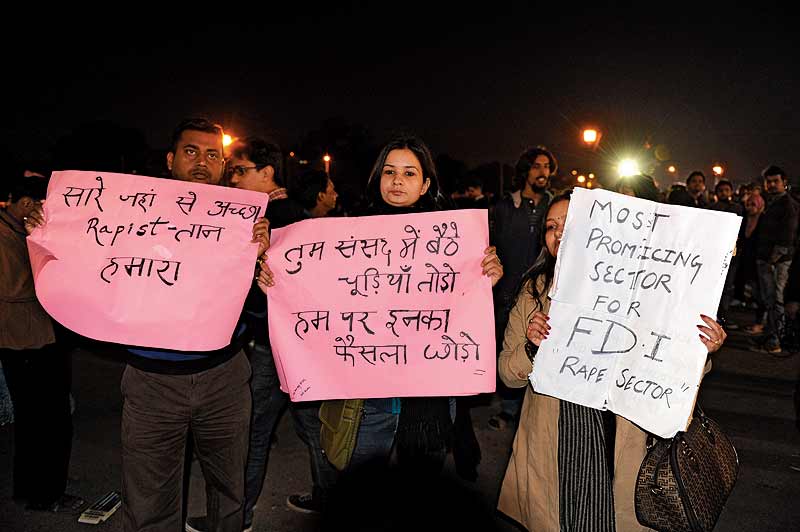 Although her family is grateful for all the support and help, they are upset over the problem between the SDM and the police over taking their daughter’s statement. Says D.K. Mishra, uncle of the male friend who was with Jagruti, “This fight between the police and SDM has been very disappointing and diverts the focus from the issue. One should not go after publicity in such sensitive issues wherein every word matters. It would have been encouraging had it been handled more responsibly.”

“From the patriarchal content of textbooks to ads portraying women, our society’s conditioned to treat women as subservient.”

Likewise, while people have every right to express this scale of indignation at what happened to Jagruti, they also have to be responsible in their reactions and desist from vigilantism. “Hang them,” has been almost the universal reaction, and castration a close alternative. It brings to mind the December 2008 incident in Andhra Pradesh when two women engineering students of Warangal—T. Pranitha and K. Swapnika—became victims of an acid attack by three young men. The main accused, Srinivas, was apparently targeting Swapnika as she had spurned his advances. People were angry, and three days after the attack, the police shot dead all three, allegedly “in self-defence”. Swapnika died a month later. Human rights activists raised the issue of “mob justice”, but to this day, the then Warangal SP, V.C. Sajjanar, is hailed as a hero for the “encounter” and “instant justice” he delivered.

The Lucknow-based Red Brigade, of whom we have spoken earlier, also admit to vigilantism. “Yes, we believe in public thrashing of people who indulge in physical exploitation of women or sexual abuse with minor girls,” asserts Usha Vishwakarma, the brigade’s ‘commander’. Basically, it speaks of a yawning deficit in justice delivery, which the people are themselves seeking to fill.

The rage in Jagruti’s case has been unprecedented. But it should not make us blind. The outrage has touched various strands of society. But there cannot be a kneejerk reaction to a complex issue. Even on the night Jagruti was being flown out to the state-of-the-art Mount Elizabeth Hospital in Singapore, a 42-year-old woman was gangraped by three men in a vehicle and then dumped in Kalkaji in south Delhi, some kilometres away from the mall Jagruti and friend had gone to and returning from where they had boarded a bus that was to become a chamber of horrors.

Rape And Our Politicians

No sitting member of the Lok Sabha faces a rape charge 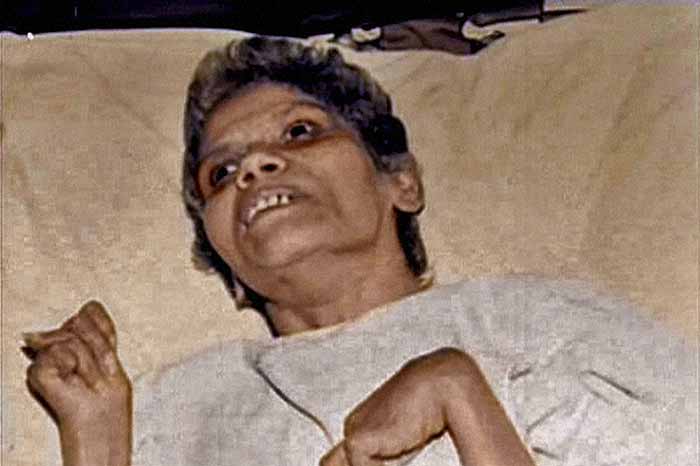 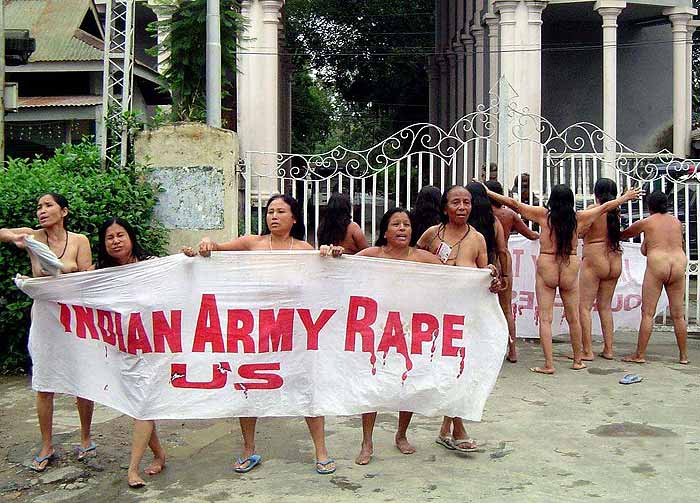 By Amba Batra Bakshi and Chandrani Banerjee with Prachi Pinglay-Plumber and Prarthna Gahilote in Mumbai, Sharat Pradhan in Lucknow, Madhavi Tata in Hyderabad and Dola Mitra in Calcutta