To the makers of crossover films, such writing offers a readymade formula. Who cares about shelf life? To the popcorn-munching, diet coke-guzzling PVR crowds, it's a cool movie and the heroine's wardrobe that count, yaar. 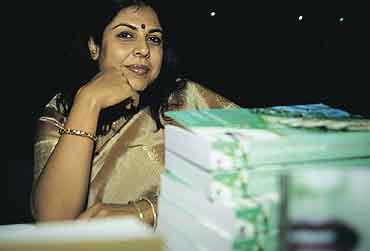 On all perishable goods meant for human consumption, there is a mandatory "Use by..." date. Something similar needs urgently to be devised for literature, or what passes off as a literary offering nowadays. What has definitely gone off and acquired a distinct pong by now are novels by nri housewives on the immigration experience (contents include sexual abuse, cultural shocks and syrupy nostalgia). At the centre of most such novels is a young girl, often brought up in Calcutta because there is a morbid attraction between Bengali NRIs and novel writing (Bharati Mukherji, Sunetra Gupta, Jhumpa Lahiri, to name just a few). The cast includes several hysterical or fey Bengali women: aunts, grandmothers et al who can read signs in vegetables, cook up storms in their kitchens and swish ominously through the life of our Bengali heroine, chanting mantras, telling apocryphal stories and deciphering omens.

Chitra Divakaruni is a respected name in the novels of this genre. Her books have titles such as Mistress of Spices, The Vine of Desire, Sister of My Heart and (the latest) Queen of Dreams. The novel, briefly, is about Rakhi whose mother has the gift of deciphering dreams and can warn people of ominous future happenings. However, as the mother has to keep herself pure by denying herself all carnal pleasures, she reduces her helpless husband to alcoholism. Her daughter is a mute observer to her mother’s strange life that includes sleeping alone in the sewing room (sometimes also called the sowing room, either by editorial oversight or design) and throwing up when faced with a particularly gruesome omen. Rakhi marries a feckless Indian musician, Sonny, and has a daughter, divorces her husband and sets up a tea shop with another NRI, called Belle (actually Balwant) and paints as well. Rakhi’s mother dies in a car accident, while chasing a significant stranger, leaving her battered father behind for Rakhi to look after. This is only the first of several catastrophes that befall Rakhi: her tea shop is threatened with closure as a well-known coffee chain opens a new restaurant across the street, squeezing her business to the edges of penury. Finally, a fire almost destroys the shop and 9/11 wipes out all hope of a revival.

At this stage, when Rakhi’s life is coming apart, enter her mother’s journals and a turnaround. Father reforms, becomes legendary chef (all those Bengali recipes can now be aired), Rakhi becomes successful artist, Sonny and she come close again and we all drown in a sea of rasogulla syrup. Her mother had once told Rakhi that one of the primary laws of the universe is: "There is no darkness but light follows." We can deduce that Rakhi’s story illustrates this bit of ancient wisdom. The success of such trite novels in the West has always puzzled me, for it is not just book clubs for suburban housewives that buy them. They’re reviewed in prestigious journals, their authors proudly paraded by publishers across the continent. One reason is perhaps the eternal pull of the phenomenon now rightly marketed by our tourism ministry as Incredible India! To a land devoid of myth and childhood, our Indian tales have a fascination akin to that of fairytales. But now another aspect dawns on me: to the makers of crossover films, such writing offers a readymade formula. All they have to do is sign up an Aishwarya Rai (as Gurinder Chadha’s done for her proposed film version of Mistress of Spices), drop in some bhangra pop and dress it up in digitally perfect colour schemes. Who cares about shelf life? To the popcorn-munching, diet coke-guzzling PVR crowds, it’s a cool movie and the heroine’s wardrobe that count, yaar.

The Gospel Of St Makelove