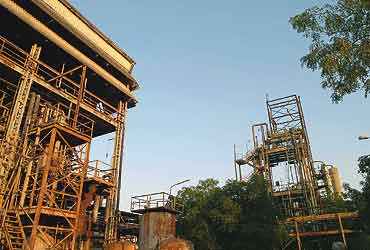 Even before it could take off, the Madhya Pradesh government's plans to build a memorial for victims of the 1984 Bhopal gas tragedy is in the thick of controversy.

The government proposes to spend close to Rs 100 crore on building a memorial park at the 67-acre site where the now-defunct Union Carbide plant stands. Survivor groups describe the idea as 'vulgar' and 'unacceptable', and say the money should be spent on giving a better deal to thousands of suffering gas victims.

What put them off, for a start, was the money spent on a national-level competition organised in September by a state government outfit, the Environmental Planning and Coordination Organisation (EPCO), to choose a design for the memorial. Prizes worth Rs 13 lakh were handed out to the architects who entered. The state government now plans to execute the design by Delhi-based architect Suditya Sinha, who was awarded the first prize. Estimated cost: Rs 96 crore.

Some of the striking features of the design, as described by the architect, are: