My own Mumbai police force has an image of its own which is embarrassing to everyone in uniform. 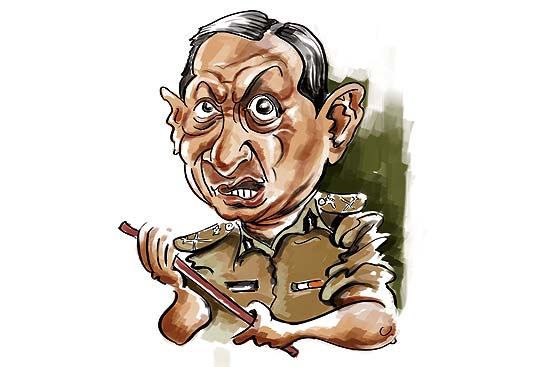 This diary has to be more hush-hush than normal ones.

For there are times when we are ashamed to call ourselves policemen. How on earth did the ‘Bombay’ police acquire the reputation of being next only to Scotland Yard? Who created this myth? We fondly think of the kind and gentle bobby holding the hand of a six-year-old schoolgirl or 65-year-old granny to help them cross the street. Are these images still valid?

Though allegedly No. 2 to Scotland Yard (but where does that leave the FBI?), my own Mumbai police force has an image of its own which is embarrassing to everyone in uniform. Know where Saki Naka police chowki is? O, doesn’t matter anyway. Last week two officers and one constable arrested a 29-year old model-aspiring-to-be-an-actress, dragged her to the chowki and raped her. Somehow, she managed to contact me, I filed an FIR and ordered an investigation.

Our officers are amazing, I have to admit. They managed to rape in the crowded police chowki. Assistant police inspector Sunil Khatpe raped the woman twice, each time screaming it was her duty to give him pleasure! Do they teach it at the academy these days? A sadistic perversion of the Kama Sutra? The Indian police and the famous love treatise are surely from different planets. Khatpe later enquired with the medical officer whether the bite marks on the victim’s body would have healed in view of the delay between the time of rape and the time of medical examination!

Yes, our police force knows a lot about police and medical procedures. We have to thank the CID crime serial where Dr Salunkhe, the pathologist-cum-fingerprint expert, authority on poisons, wizard in sketch-making and so on, is quite ready and willing to share crime secrets with his intellectually inferior police colleagues!

We have our own Salunkhes too, but more disturbing is the presence of police officers and men who swagger around, arrest women suspects on mere suspicion and bring them to police chowkis at all hours. In the Mumbai incident, the victim, besides the rape, lost most of her jewellery and cash. Mind you, the shocking incident happened in a busy commercial area of Mumbai where there was plenty of traffic on the streets and shops were still open. Was the average public aware of the fact that young women were raped and robbed inside police chowkis? We have to think of a suitable explanation for this heinous crime. I am tired of dishing out the same excuse...there will be some black sheep, the city police force is 55,000-strong. But this is a special type of evil, if not nipped in the bud, Mumbai may go the Delhi way or is it Mumbai may go the Mumbai way?