Whether Bhopal’s nawabi fare, Indore’s ghee-saturated vegetarianism, or spartan tribal cuisine, a food trek through the heartland is gustatory bliss 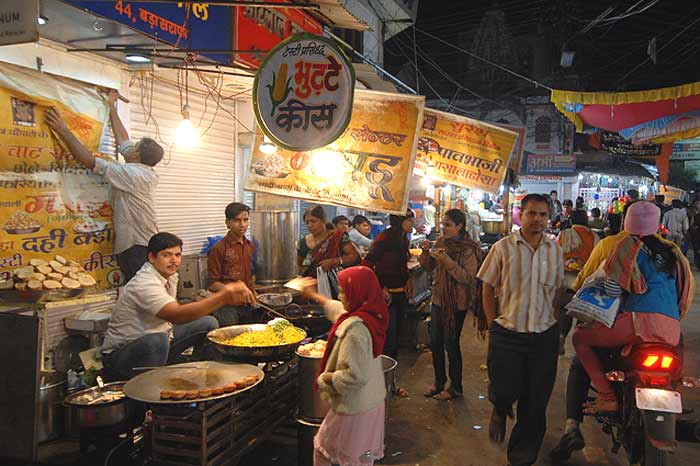 Could Dost Mohammad Khan, the 18th century Afghan adventurer who founded the princely city-state of Bhopal, have got as far as he did had he corroded his insides with desi-Chinese paya soup? It’s a “what if” question just waiting to be asked as we fascinatedly watch leather-jacketed young men queuing up in a Bhopal alley called Chatori Gali for this ostensibly muscle-building brew (“Soup ka pyala, faulad banane wala” ), which contains nothing less than paya (goat’s trotters), cornflour, soya sauce, vinegar, black pepper, black salt, chat masala and desi ghee!

However, Dost can rest easy in his grave. Notwithstanding the appeal of this eccentric soup, Bhopalis still adore their qormas, pasandas and especially their rizalas; their kababs and pulaos; their filfora, the dish of hand-hammered strips of meat born in a shikar-crazy ethos; their game fowl, including peacock (though try getting anyone to admit that, officially). What is more, even the ruling BJP, which would rather project Bhopal’s pre-Muslim past (note the hulking new lakeside statue of the 11th century Raja Bhoj), cannot detract from the status of Bhopal’s premier culinary brand. Muslim cuisine remains a distinctive marker of the city’s identity, even more so than the ubiquitous poha-jalebi-sev breakfast, which Indore, as we are soon to discover, serves up much better.

To those who condescendingly write off their food as “poor man’s Lucknow”, Bhopali Muslims insist it’s different, not inferior. Being rugged Pathans, they explain, they like their gravies drier and plainer, without Lakhnavi nakhra or Hyderabadi mirchi and khattas. “We also add our masalas in a very different sequence,” says Sikander Malik, a passionate young foodie working on a mammoth Bhopali cookbook. “Haven’t you noticed how they release their flavours in your mouth?”

To get what he means, you need to find your way into a domestic goddess’s heart. There are bazaar stalls aplenty, and authentic restaurant food (at the popular Filfora, and the classy Jehanuma Palace Hotel run by a branch of the former royal family, for instance). But there’s nothing quite like the pasanda prepared by Jehanuma owner Sonia Rashid’s khansama. Or the aroma and taste of the chicken rizala, extravagantly laden with hara dhania, cooked for us at Sikander’s behest by Tasneem Khan, who shares Shaukat Mahal, a crumbling, pale pink rococo-ish palace, with 14 other families of former nobles.

It tastes all the better for the leisurely chit-chat of Tasneem’s relatives, some of whom look, thanks to determined endogamy, as if they have just stepped off the plane from Kabul. We hear of family fish recipes, with the proportions carefully left out, of the beautiful aunt who turned down the role of Anarkali in Mughal-e-Azam, and of the alarmingly large hole in the terrace outside where the plaster just fell through one morning....

Indore—less than three hours to the southwest, on the Malwa plateau—is strikingly different, both in its food and its royal encounters. Don’t worry about wangling invitations to homes, the food will probably be wholesome but monochromatic. The action is on the street, where the flavours of Indore’s diverse communities mingle madly.

That’s why you have concoctions like potato balls stuffed with coconut and dry fruit, fried in ghee made from cow milk, sprinkled with sev, and doused in two kinds of chutneys! To deconstruct them, you need to get a fix on the basic Indori recipe. I mean people, not food.

So here goes. Start with a Maharashtrian base (given that this was, historically, a Maratha state, ruled by the Holkars), add a thick layer of the local Malwi-speaking folk, douse liberally with Marwari and Jain (they came in droves as Indore grew in prominence as a important trading centre), throw in a dollop of Gujarati too. Muslim? Well, there is a sizeable population, but their flavours are missing in a food scene dominated by traders with food taboos. Bhopal really seems a long way off when you hear Nand Kishore Shivgiri, head of the association that runs Sarafa Bazaar, the iconic night-time food street in old Indore (it is a jewellery market by day), declare: “Yahan anda aur non-veg ki koi entry nahi hai.” Muslims, he informs me, can’t operate food stalls in “bania and mahajan ilakas”, because of what they eat.

He does redeem himself, somewhat, by emphasising how many Muslims come to eat at Sarafa. And I can see for myself that the burqa-clad lady, done with browsing through a rainbow collection of dangling bras in the last street, is now patiently waiting for her takeaway order of paneer chilli! 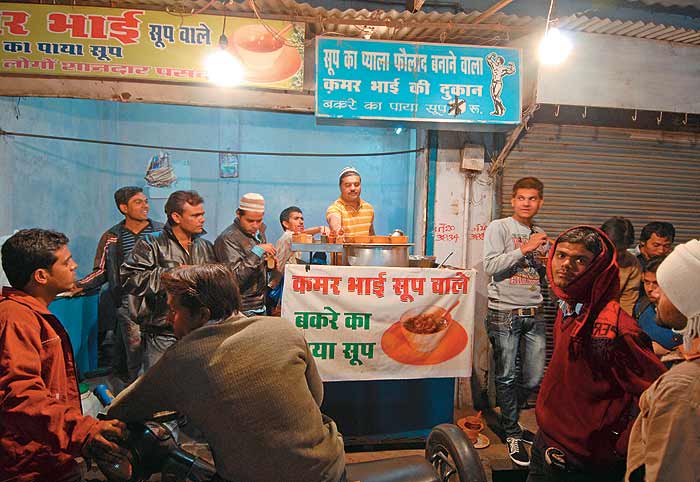 Sarafa is mesmeric, because it’s street theatre as well as street food: menus strung up on the shutters of closed shops, patterns of light and gloom as well-lit carts break up stretches of darkness, food vendors dazzling you with sheer variety. (Indore probably has more kinds of namkeen than anywhere else on the planet.) Indori-born-and-bred artist and photographer Bhalu Mondhe points out that you can eat well for Rs 100 and the food is never stale or reheated. Of course, subtlety isn’t its calling card; it is all cream, ghee, sev, mirchi, tartness. “Indoris,” says Bhalu, “like their food chatak.”

That, perhaps, is why Richard Holkar, scion of the erstwhile ruling family and gourmet cook, writes off the local food scene with a dismissive sentence: “Yahan ka khana bekar hai.” (The food here is rubbish.) The only exception, he tells us, is the Malwa delicacy, dal bafla (elaborately prepared wheat balls served with ghee and dal).

Do the Indoris parked in their cars outside the foodie haunt, Chhappan Dukan, their jaws moving silently as they ingest its crisp kachoris, care what former princes think? Probably not. In a city where Holkar chhatris are eclipsed by giant hoardings and malls, commerce is the only king. And street food is its anointed handmaiden. 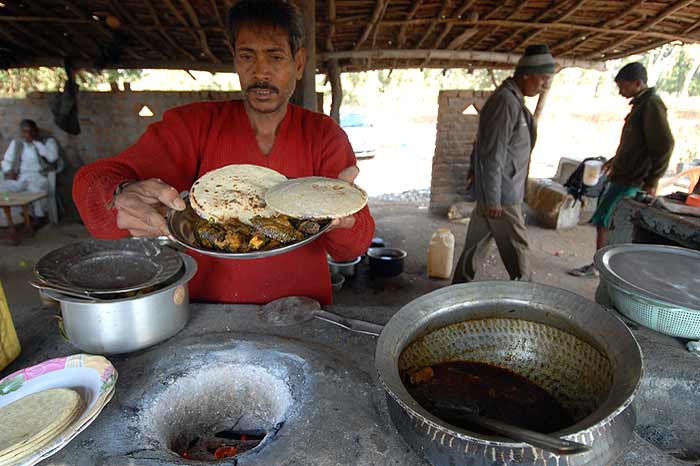 Fowl’s the word Madhav Bhinde with his black chicken

Drivers in other cities grumble about bad roads. Our Indori driver puts it more colourfully: “Road aise banaye ke tyre chaat jate hai.” It’s time to head out now, on those tyre-chataoing roads, westwards to Alirajpur. It turns out to be a humbling five-hour ride that takes us away from urban chaos, gastronomic excess and lush, emerald wheat fields to a brown, austerely beautiful, lonely landscape, yielding only a single annual crop of maize and other coarse grains.

Not that special dishes aren’t made, despite an unremittingly tough life that involves farmers migrating for months to work in nearby Gujarat for daily wages. Dal pania, as Gauroo Awashya and Manisha, a Bhilala couple from Ambaja village—surrounded by dramatically undulating land and golden balls of drying urad and maize plants—explain it, is not a million miles away from dal bafla, except it’s made with maize, and eaten with urad chilka dal. And no, there’s no ghee. 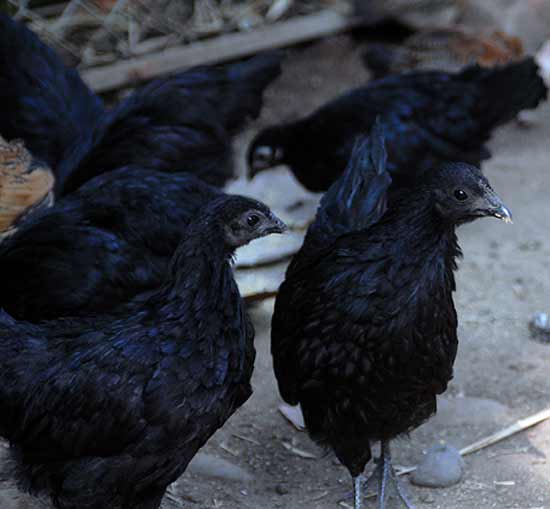 When Alirajpur, a 97 per cent tribal district dominated by Bhils and Bhilalas makes headlines, it is for all the wrong reasons. The district has India’s lowest literacy rate and the highest murder rate in Asia (this was some years ago, but it is still very high, thanks to the ready availability, for score-settling, of bows and arrows, and a sinister-looking scythe called the falia.). So I did worry, as we approached, whether it was not-quite-right to be there on something as frivolous as a food journey.

Those doubts lifted as we hit the first toddy stall and found ourselves engulfed by smiling, tipsy hospitality, and entreaties to partake, for a small price, of a whey-coloured liquid being transferred into glasses from plastic bathroom mugs. There seemed no point coming all this way and then saying no to Alirajpur’s elixir, scourge, opiate and cash crop all rolled into one. So of course, we did not. It got better and better. To start with, a discourse on the local flora from the hospitable district forest officer, A.K. Singh. And interesting safety tips. As we watched a young man effortlessly send an arrow flying 50 metres, Singh said: “Here, people always drive with the windows rolled up.”

All that Alirajpur has in common with Bhopal and Indore is that it was also a princely state. Its late ruler, Surendra Singh, is said to have entertained in style, if not opulence, at a graceful palace with scalloped arches. It now stands mottled and abandoned in barren lands, and a royal ballroom with a fine wooden floor is now a badminton court on which district officials eke out bored evenings by tossing shuttle-cocks about.

For us, though, there was a royal treat in the offing before we left. Our entreaties had borne fruit. The prized local black chicken kadaknath, albeit in a slightly hybridised version, had arrived at Madhav Singh Bhinde’s tea-stall, where he cooked it for us, watched by a deeply interested crowd. It was bony and gamey, but its deep black skin was flavourful. And unlike the closely guarded secrets of the Bhopali court, Madhav’s recipe is freely available: fry in oil, add salt and pepper, chilli, garlic and ginger. Cook for a long time. Drink toddy while you wait.