Who wants to hear poll speeches when Sholay's Veeru takes the stage? 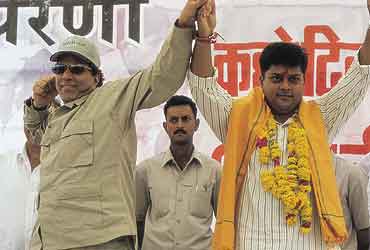 outlookindia.com
-0001-11-30T00:00:00+0553
Kitne aadmi the? Monday, 11.30 am, Jhalawar (Rajasthan). The usual setting for a poll meeting in a public park with wooden barricades and a larger-than-life stage adorned with posters of senior BJP politicians. Only about 100 bored people waiting for the spectacle to begin. A local BJP leader comes to the mike: "We have just got the news that the famous cinestar Dharmendra has reached Jhalawar. Please help us maintain discipline. There are separate enclosures for women, journalists and vips on my right, and for other leaders on the left. Arrangements for cold drinking water have been made in three different locations." He keeps repeating the lines like a parrot every two-three minutes. When he's not talking, the public address system plays patriotic songs and pre-recorded campaign speeches ridiculing Congress leaders. For instance, "Yeh dekhiye Vajpayeeji ke khilaaf kaun hai. Mummy aur uske bachche! (Just see who's against Vajpayeeji! Mummy and her kids!)." And threats to pack Sonia Gandhi off after these elections with a one-way ticket to Italy.

By 1 pm, about 3,000 men and women have gathered and the crowds are still swelling as a stream of buses, jeeps and cars brings in party workers and locals. Suddenly there erupts a flurry of activity. Dharmendra, the BJP's candidate from Bikaner, has arrived along with yuvraj Dushyant Singh, the local BJP candidate and son of chief minister Vasundhararaje. A beaming Dharmendra, dressed in a baseball cap, dark-brown goggles and light-green army-style clothes, walks up the stairs with Dushyant (in ethnic wear, a white kurta and churidaar). As soon as he gets on the stage, Veeru or Dharam (as he's popularly known) punches the air with both fists. Again and again. The crowd, now over 5,000, cheers each time. He sits down and starts punching the air again. The crowd goes berserk.

The state, district and local leaders start their speeches. They talk about the achievements of the chief minister and the BJP. No one's interested. The crowd is here to hear Dharam. A heckler to a speaker: "Arre, get out of the way. You are blocking our view of Veeru." Another one: "Let him speak. We don't want to hear you." Dharmendra is enjoying the attention. While one speaker is rambling, he walks to the edge of the dais and accepts a couple of garlands. After a few minutes, as another one is speaking, he pulls up a man (the crowd's gender ratio is 50:1 in favour of men) on to the stage. The crowd goes wild. The hero walks up to the speaker and asks for his forgiveness. "Sorry, sorry. Please continue." A district leader is disgusted as he's heckled and booed several times. "Lo aap hi boliye. They don't want to hear me. Aap se Sholay ke dialogue poochhenge," he says. Finally, there's a slogan from one corner. "Hema Malini," shouts someone. "Zindabad, zindabad," a few dozen people join in. That's when the speaker decides enough's enough, stops midway and walks back dejected to his chair.

The only time the crowd quietens and the focus moves away from Dharam is when the young Dushyant starts speaking. The CM's son, a first-time aspirant, is an amateur, his moves laborious and painful, his prepared speech lifeless. In comparison, the actor, also entering politics for the first time, is spontaneous, natural, and bonds with his fans. But even Veeru has enough durbar decorum in him not to interrupt the prince. So he simply signals to the crowd to remain silent and listen. And then it's time for the lights to shine on him. Once more. Dharam's baseball cap has been replaced by a traditional one as he walks up to deliver his dialogues. The excitement builds.

"I love you, love you, love you all," begins the hero. As expected, he gets down to justifying why he entered politics and why he chose Bikaner as his constituency although he was born in Punjab and has spent the last 42 years in MumbaiThe previous night, after a hard day's campaign outside Bikaner, he had given us more details while relaxing in his suite in Laxmi Niwas Palace Hotel. "Initially, when I was asked to stand for elections, there was a dilemma. Kyonki politicians ki chhavi kuch achchhi nahin hai (The politician's image is not quite nice)." Then came the realisation that "I belong to everyone and all people love me. I wanted to prove that Satyakaam was not just a film. I wanted to prove that I can be that in real life too." (The 1969 movie depicts one man's fight against corruption of all kinds and Dharmendra considers it the strongest role of his career.) Bikaner won over Ludhiana and Patiala, because, as his speech writer reveals, "35 of his 235 films were shot in Rajasthan." Since his campaign has begun, Dharam, dressed in his battle gear with a matching hat, says he's become a "soldier-politician".

In Jhalawar, the people are still waiting for dialogues from Sholay. But Veeru is more in a mood to woo votes for the young heir-in-waiting. "I want all of you to bless Dushyant Singhji. If you agree, raise both your hands." And the crowd does that. Everyone present is willing to do anything as long as Veeru performs. The moment comes. He does a derivative of the Sholay's famous water tank suicide scene: "Main aap sab ki problems Dilli tak pahunchaunga. Wahan Qutub Minar pe chad jaunga aur boloonga, 'Dilliwaalon, agar aapne meri baat nahin suni to kood jaunga, mar jaunga, mit jaunga' (I'll take all your problems to Delhi. I'll climb the Qutub Minar and say: 'People of Delhi, if you don't listen to me, I'll jump from here and kill myself.')." Then he sings the Yeh dosti song from the blockbuster. A heckler asks: "What about Basanti? When will you get her?" The reply: "Basanti will come. So will Jai. And others too." But he hints that this will happen only if yuvraj wins the elections.

Someone asks him to take off his goggles so people can see him better. Dharam obliges. As his speech crawls towards the end, there are shouts of "zindabad, zindabad" from various quarters. The hero turns towards each of those corners and says, "Mujhe nahin. Tumko zindabad. Tumko bhi. Tumko bhi. Aap sab ko zindabad, zindabad (Not me. Zindabad for you. And you too. Zindabad to all of you.)."

But politics is not the end of his Bollywood career. Right now, Dharmendra is making a film on extramarital affairs with Mallika Sherawat as the "other woman". "But it's a comedy like Chupke Chupke. Don't misunderstand because Mallika is there," he laughs. We don't know the ending of this scandalous affair. Like we don't know how Dharmendra's flirtation with politics will end this summer. In real life, unlike Sholay, there are no coins with two heads.