Coming from Rituparno, a supposed specialist in handling delicate human relationships, it is a huge disappointment. 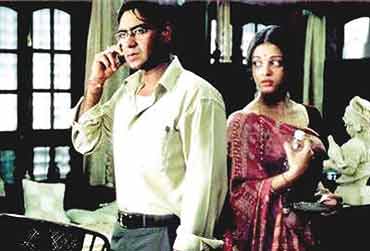 If cinema is all about mood and atmospherics alone, then Raincoat could perhaps be considered a good film. The blue and grey palette, the antique furniture in an old house, the play of light and shadows, the incessant rain—it could have made for a great cinematic evocation of crumbling romance and suppressed intimacies. But not quite. Coming from Rituparno, a supposed specialist in handling delicate human relationships, Raincoat is a huge disappointment. Primarily because the sweep of its visuals never finds the critical support of a good script.

Manoj (Devgan) comes from Bhagalpur to Calcutta to seek help from his friends in setting up a new business. One rainy day he goes out to meet Neeru (Aishwarya), his ex-girlfriend, who had ditched him to marry a rich man. Much of the film is a long conversation between the two as they revisit the togetherness of yesterday and talk of their forked lives. Raincoat then is not so much about telling a story as it is about creating that aching feeling of lost possibilities and unfulfilled passion. It needs to draw upon powerful performances, profound dialogues and deeply resonant moments. However, the film's so-called intensity comes across as patently deliberate. Instead of getting drawn into the pain of the lovers, you feel suffocated by their posturing. And there are no great moments to take back home, save the scene where Neeru hums Geeta Dutt's sensuous Meri Jaan Mujhe Jaan Na Kaho. It's a seamless hook-up with Basu Bhattacharya's Anubhav.

Devgan is suitably restless and restrained. Aishwarya looks beautiful without the pancake. But her persona feels contrived right down to that bra strap popping from behind the sari pallu. Her rustic English is unforgivable. One minute she says "watchman" like a true-blue village belle, next minute she pronounces "flirt" in perfect memsaab accent. Now isn't there something called consistency of speech? The real culprit is the dialogue—stilted and inane. For instance, how can you dry a wet shirt with the warmth of one lone flickering candle? Or am I missing the poetry here? Raincoat made me long for the romance of Richard Linklater's Before Sunrise where two strangers on a chance encounter discover a deep bond and unforeseen love for each other, all by talking ceaselessly on the streets of Vienna through the night. Wish Raincoat could have spoken as well to the viewers.