The Congress takes to the art of running a coalition, while steering clear of constitutional improprieties 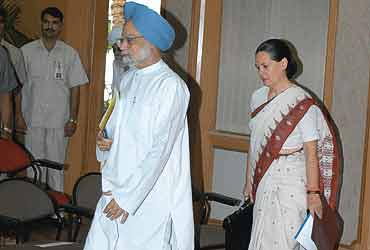 The former deputy prime minister's pithy and derisive comment about the multiple power centres in the ruling UPA coalition may have sounded prophetic when Manmohan Singh took charge. But going by the initial performance of the new government, one can't help but think that Advani's one-liner sounds more petty, less prophetic. For the moment, anyway.

Although the Congress-led UPA has barely completed 50 days in office, the wheels of government seem to be turning smoothly. This, despite the fact that contradictions are inherent in coalitions because of the diversity of interests and representation. Also, the Left parties, which are supporting the UPA from the outside, have been bristly and vocal, making the management of contradictions challenging, if not difficult, for the Congress. And, of course, speculation about the emergence of Sonia Gandhi as a super-PM continues, even though there is no clear evidence of an interfering, extra-constitutional power centre. So, is the Congress—which has only run the show before as a single party at the Centre—swiftly mastering the art of running a coalition government?