These kisans plough their fields with a painter's panache and their diet isn't staple. Their farms are sites for gastronomic tourism. 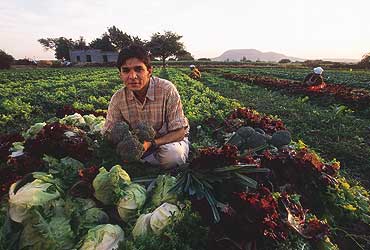 outlookindia.com
-0001-11-30T00:00:00+0553
Sunil Bhu has an enviably epicurean reputation. People call him "don" of the culinary cartel that runs the nouvelle kitchens of India. And when you first encounter him, with his deep, dark eyes and swarthy Sicilian complexion, he does resemble Al Capone. Fearing his Italian connections, your stomach churns more when he says he is into "mascarpone" and "scarmozza". Suddenly you sweat and wonder if "scar-mozza" is something that happens to "mascarpones" who don't pay mafiosi. But Sunil doesn't have any blood on his hands, just thousands of litres of cow's milk, which he turns into Italian cheeses called mascarpone, scarmozza and mozzarella for authentic tiramisu and pizzas. Belonging to the udderworld, his business plan is all about exhorting you to try natural cheese rather than the processed variety. Also part of the haute-cuisine mob are Samar Gupta, Parikshat Oberai, Vivek Kushwaha and Dilip Chandy, gourmet farmers, gunning for their share of your gastronomic appetite, whose turnover is worth Rs 5 crore annually. And their ammunition—supplied to hotels, restaurants, cruise liners and home kitchens—has names like arugula or rocket, a peppery green that propels salad lovers into ecstatic orbits, the meat of guinea fowl to lead you into temptations of unusual flesh, and carambola, a star-shaped fruit that stuns you with its five-pointed silhouette.

Too haute to handle, these are designer-food farmers whose passion fruit produce needs sexy seasons and stylish seasonings of pink peppercorns and Spanish salt. Growing no ordinary staples like wheat and rice, they feed world cuisine foodies: the passionate about pasta-puttanesca, ardent about avgolemeno, seduced by scarmozza and beguiled by bak-choy (Chinese chard) buyers who crowd speciality restaurants and markets, dressed in anything from bindis and khadi to crystal tattoos and crushed silk capris. "Button mushrooms are as common as potatoes and now you can find Thai, Lebanese and Italian food in almost any neighbourhood or Diwali mela," says Parikshat Oberai of Oberai Farms, Uttaranchal. And he's right, it isn't just ritzy eateries, but even traditional khansamahs who add galangal to flamboyantly flavour Thai curry, chiffonade parsley for Lebanese tabouli and create Kiwifruit-kulfi with aplomb.

Satisfying the wildest food fantasies of customers with deep wallets, these gourmet-horticulturists sow seeds for a rainbow harvest of lollo russo (red-leaf lettuce), purple cabbage, broccoli, red and yellow peppers and zucchini. Vivek Kushwaha, ceo of Gayatri Farms, Haryana, is a poultry farmer who has feathered his nest without tapping into the highly lucrative butter chicken business. A duck man at heart, 35-year-old Vivek says: "I started by buying parent stock from England 15 years ago and added guinea fowl, capon and turkey at chefs' requests." Right now, he is busy fattening these Rs 250-per-kg turkeys for his Christmas orders on five production sites. This year he has sold 2,500 turkeys to individual customers, embassies and restaurants all over India. In 1988 he could sell only 50 birds. Trumped as the healthy alternative white meat, turkey, country cousin of the peacock, is all set to make a plumed entry onto menus.

Dealing with top chefs in India, air-freighting produce nationwide, where has this growers-elite sprouted from? Samar Gupta of Trikaya Farms, Pune, and Parikshat are both economics graduates who've turned to tilling their fields for exotica. In Samar's case, the decision was inherited. His late father, Ravi Gupta, founder of Trikaya Advertising, had also pioneered an avant-garde farm in Lonavla. Sunil, a hotel management graduate, chose to take the cow route to success by learning cheese-making in Belgium before returning to Haryana to set up Flanders Dairy Products.Vivek, a political science student, on the other hand, had to decide between his romantic notions of joining the army and his duck dreams.

Cultivating a taste for their harvest hasn't been easy. All Sunil had when he started was a cow from his mother and open fields, where he began by making just one ball of gouda cheese everyday. Winner of the National Productivity Award, Vivek says: "I had no backup, just my own money with which I rented a farm, where I worked 16-hour-days caring for my birds." When Parikshat needed money to fund his broccoli, red cabbage and lettuce growing project in expensive net-houses in 1999, "banks couldn't verify our project reports. Even after officers came to our farms to understand costing, all we got was a personal loan". Samar, at one point, begged his father to give up on the farm and invest in stocks. Bangalore-based Dilip Chandy says: "It took years to convert Prakriti, my family's coconut and chikoo plantation, into a self-sustaining bio-dynamic farm."

In contrast, overseeing the Delhi-based Indo-Israeli r&d Demo Farm, possibly India's most state-of-the-art farm, is Eitan Neubauer, project manager. "Here we demonstrate how farming can be done with the click of a mouse," says Neubauer, "In climate-controlled greenhouses, computer software regulates temperature and fertilisation. Today's pick is sold today," he says peeling what looks like an everyday cucumber, except that he doesn't bother to rub the ends to get rid of the bitterness. Bite in and it is surprisingly sweet and seedless. But even for Eitan, getting people to pay four times the price for his gourmet veggies was a nightmare, until chefs like New Delhi-based Bill Marchetti from itc Maurya and Bruno Cedran of the Imperial insisted on sourcing vine-ripened produce from the Indo-Israel farm.

Spend just one day in the life of an avant-garde farmer and you find it's as hard as any kisan's. None of them grew up with traditional wisdom about raising guinea fowl, nor had they eaten lollo lettuce in their salad days. Parikshat laughingly recalls a lesson in backward integration: "I went to Flavours, an Italian restaurant in Delhi, and begged the chef to teach me how to cook coloured peppers and toss a salad, because after growing lollo bionda lettuce, you've got to know what to do with it." But, even after growing mulberry creepers over duck houses to keep odours down and birds cool in summer, sourcing imported seeds, to ensuring that Holstein-Zebu cows yield milk with a specific 3-5 per cent of fat, essential for making quality-consistent cheese, nothing comes with a guarantee.

Mother Nature's freakiness is something they all live with. When Vivek discovered he was losing thousands annually to rats, which were eating up expensive bird feed, he spent months studying mice. He then devised a rat-proof house made with sinking sands from the Yamuna and a double-walled maze of false alleys. "Rats are lazy, when they find a path they follow it rather than break though the second wall, and after going around in circles, die from exhaustion." Parikshat tried everything organic to stop his crop from being attacked by the black diamond moth, and only then sprayed pesticides. Managing a farm without bulls, relying on artificial insemination instead, Sunil still has no way out of a seven-day week. "My cows give 2,000 litres of milk everyday, including holidays, which has to be turned into 200 kg of cheese. "

Even at the top of the food pyramid, things don't always pan out easily. When Abijit Saha, executive chef, The Park, Bangalore, introduced guinea fowl on his menu, no one ordered this speckled game bird. "Customers were chary about the word fowl. I rechristened it 'guinea hen' and suddenly guinea hen breast, stuffed with proscuitto and morels, became a hot seller," says Abijit.In Delhi, at the Taj Palace's Orient Express, where the late Congress MP, Madhavrao Scindia, was a frequent discerning diner, "you could be sure I would get a call from the chef, if the duck wasn't up to the mark", says Vivek. For Samar, the early experiments with imported lettuce seeds paid off when McDonald's decided to source salad vegetables from his farm. Today, Trikaya earns Rs 3 crore annually. Their trucks supply Pizza Hut, Domino's, Subway, five-star hotels, stand-alone restaurants, 30 sabziwallahs and cruise liners docking in Mumbai.

But no matter how haute their produce may be, these gentlemen farmers, whom you could meet at champagne soirees, have their connections to Mother Nature and India intact. Albeit in unusual ways. Walking through Sunil's hygienic stainless steel cheese factory, you've got to watch out for wet dhotis, hanging from the ceiling. "Dhotis are fabulous cheese cloths," says Sunil with a smile. Eitan embarressedly confesses: "In climate-controlled greenhouses, where nature can't do its thing, we need to help pollination artificially." After a delicate pause and begging your pardon, he says, "It's really a vibrator, which we call the electric bee." From designing bees to refashioning the dhoti, the gourmet farmer has arrived. Ready to grab you by your taste for the exotic and take you on an explosive journey of flavours starting with rocket greens on your salad plate to the final fruity slice of loganberry pie.