And so it is that a shy, diffident man arrives on the world stage with a bang 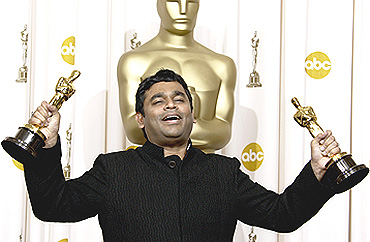 Flashback to 1992: India is taken by storm when Mani Ratnam’s unassuming film

, Roja, gets everyone hooked to its fresh, irresistibly lilting soundtrack. The film debut of a shy jinglemaker, it bags Rahman the national award for best composer, and years later gets picked as one of Time magazine’s 10 best soundtracks of all time.

The two milestones to the left span a 17-year-long journey that has not just been about personal achievement but also about spearheading a musical revolution, breaking old moulds and setting new trends, giving a fresh face to that much-reviled entity called Hindi film music. All this managed almost with a remote control, in the peace of A.R. Rahman’s famous recording studio in Kodambakkam, Chennai.

Tamil film music had been flourishing thanks to the genius of Ilaiyaraaja, when Rahman stepped in and took it in another direction. In...