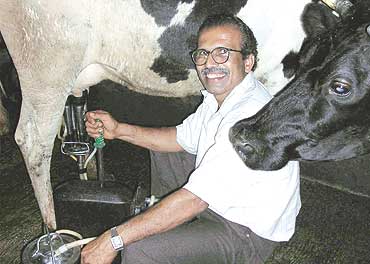 Raghava Gowda could have continued to be a 52-year-old schoolteacher in Dakshin Kannada’s Murulya village. But instead he is the inventor of Milk Master, a cow milking machine now being used by over 300 dairy farmers across India.

It began when the cow Gowda once owned, one that gave him plenty of milk, started having problems. Those days, Gowda, a busy teacher, couldn’t find time to keep her clean, and she developed a chronic udder infection. Also, Gowda strained a nerve in his hand milking her daily. Till he was forced to sell his "cash" cow, a traumatic event for a villager. But Gowda didn’t let it pass in resignation. A few years later, in 2001-02, he built a milking machine that maintained hygienic standards, consumed less time, was affordable and made it easier milking the cow for both the person and the animal.

Gowda’s gadget uses two mechanical pumps in a see-saw action to manage vacuum pressure; a hand gear builds and releases vacuum pressure alternatively in the pumps. The alternating of pressure creates a simulation of the human hand milking a cow. The machine also has a can with airtight clamps and specially moulded gaskets to collect milk, and a valve to ensure that milk doesn’t overflow. "The machine can enable one to milk 100 litres single-handedly, and more than 2 litres a minute. It leaves no milk in the udder, and is soothing to the animal," says Gowda.

Gaining ground through "a strictly word-of-mouth publicity", the Milk Machine costs Rs 9,040: "It needs no electricity and can even be used by farmers who own just one animal." Motorised milking machines used by big farmers require a minimum investment of Rs 80,000. Business has been so good that Gowda has retired from his job as a teacher to spend more time in the basement workshop of his house to upgrade and refine his machine.