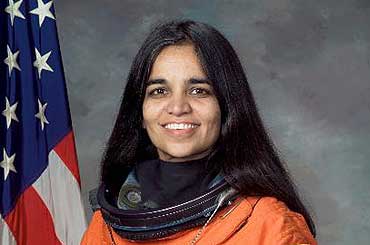 THE seventh day, way above the world, wasn't spent in rest. The melodious sounds of Raga Mishra Piloo, played by sitar maestro Ravi Shankar, woke up the first-ever Indian American astronaut, Kalpana Chawla, and her colleagues aboard the shuttle Columbia on November 25 as they reached the one-week mark of their 16-day space flight. A NASA official in Houston told Outlook: "That (tune) is very special for Chawla. She did request it." It was a cross-cultural contrast to the robust sounds of New York, New York—a Frank Sinatra hit—that woke up the orbiting astronauts four days earlier. Besides the special Indian music, Chawla's diet is typically vegetarian as a copy of her daily menu revealed: rice pilaf, tortillas, broccoli au gratin, garden split-pea soup, nuts and dried fruits, cheese spread and tea with cream and sugar.

For Dr Kalpana Chawla, mission specialist, a large part of Flight Day Seven was spent working with several samples of materials in the glove-box facility in Columbia's mid-deck designed to conduct tests on the properties of materials, unhampered by the influence of gravity.

The prime mission objective for the Columbia (STS-87) mission: the United States Microgravity Payload-4 (USMP-4), aimed at further understanding the basic properties and behaviour of various materials and liquids being flown in space. While extensive ground-based studies in these areas have been conducted, earth's gravity overshadows or distorts many measurable results. The near-weightless environment aboard the space shuttle unmasks subtle physical processes, giving researchers a clearer look into the laws of nature, a pure perspective that cannot be achieved in laboratories on earth. This may help produce better semiconductors for complex computers and other high-tech electronics. USMP science also could help produce stronger metal alloys for the aircraft and automobile industries.

TO the scientists monitoring the package of research experiments of the United States Microgravity Payload aboard the Space Shuttle Columbia, it is a mission surpassing expectations. "We're getting all the science we planned thus far in the mission," said assistant mission manager Jimmie Johnson. "And, in some cases, we're getting science results even better than we had expected."

Going by reports from NASA officials, it would appear that the Columbia mission is doing very well, indeed, despite the hitch on November 21 that led to a major orbital drama, including a satellite rescue mission. Though Chawla released Spartan from the robot arm on time at 3:04 pm November 21, officials said it appeared small control jets failed to activate, leaving the satellite without the ability to orient itself for science collection. Chawla attempted to recapture Spartan, but did not succeed. After attempting to match the rotation for another capture attempt, commander Kevin Kregel performed an orbiter separation manoeuver to move Columbia away from Spartan. Chawla later used the shuttle's robot arm to berth the Spartan after the satellite—which on earth weighs 3,000 pounds—was grabbed from out of orbit by crewmates Winston Scott and Takao Doi, a Japanese, during their 7-hour, 43-minute spacewalk.

NASA mission control sources told Outlook it was unclear what went wrong when Chawla deployed the Spartan satellite.While headlines in India suggested that Chawla goofed, a NASA official said it would be premature to assign blame on her for the deployment going awry. "We are making a series of checks to figure out whether it was due to mechanical error or crew error," he said. Dr L.S. Satyamurthy from ISRO, who works as a counsellor in the Indian embassy, agreed it was incorrect to jump to conclusions about what went wrong with Spartan's deployment. "There were problems with Spartan's systems itself," he told Outlook.

While Chawla conducts spaced out scientific experiments on board Columbia, at least three other Indian American scientists are closely following her experiments from ground. It's their work that she is carrying out in space. NASA sources identified the Indian American scientists as: Prof Ranga Narayanan of the University of Florida whose work focuses on better materials for semiconductors; and Dr Subhayu Sen and Prof Brij Dhindaw of NASA's Marshall Space Flight Center, Huntsville, Alabama, who concentrate on aspects of testing composite materials in weightlessness.

Chawla, 35, a US citizen, was chosen to be trained as an astronaut out of about 3,000 applicants in 1994. Born in Karnal, Haryana, Chawla studied engineering in Punjab University. She then left for the US where she received a Ph.D. in aerospace engineering from the University of Colorado and has been married for 13 years to Jean-Pierre Harrison, a flight instructor. Her parents, Banarasi Lal Chawla and Sanyogita, brother Sanjay and sisters Sunita Chaudhary and Deepa Vyas, who live in India, were on hand at Cape Canaveral in Florida as the Columbia left the earth. Chawla's mother told a reporter: "I was amazed, not afraid. I was amazed both by the fact that Kalpana was going up, as well as by the marvels of science and technology."

On the eve of the launch, an Indian government delegation, led by T.P Sreenivasan, the deputy chief of mission in Washington, met Chawla at the Kennedy Space Center in Florida. Sreenivasan, a career foreign service officer, told the first Indian-American astronaut: "This is a proud moment for India." Chawla, in turn, thanked the people of India and its government for their affection and encouragement and expressed the hope that her flight would further strengthen Indo-US ties.

"This is very far-fetched for me, yet when I went to college (in India), I had pictures of space shuttles in my dorm—I'm surprised I even had access to them," Chawla told a reporter while training for her mission. "I like airplanes—it's that simple. The theoretical side is mentally challenging but flying for me is sheer fun. It appeals to all my senses. The job requires a technical background and a strong desire to go out in the blue yonder." Asked whether she thought she'd have a chance to fly in space, Chawla responded: "No. It was very far-fetched to think I'd get to fly on the space shuttle. Because I lived in India in a very small town. And forget about space, I didn't even know if my folks were going to let me go to the engineering college."

"But I think everybody fantasises. And I definitely did my fair share. During the Mars mission, even though the Apollo Program had already passed, the things I fantasised—that we are leaving Earth, that we're going to Mars, we've landed on Mars, that we have our little spaceships, and we're moving around in the canyons out there."

Fantasy, or no fantasy, as a NASA official put it, "Kalpana Chawla is doing very well on board." Columbia's crew is scheduled to return down to earth on December 5 after 16 days, 17 hours and 34 minutes in space. By then, her success would have launched a thousand more dreams.