The stage is clearly set for a no-holds-barred faceoff. There is little room for doubt now on whether Rahul would lead his party into the 2019 Lok Sabha polls 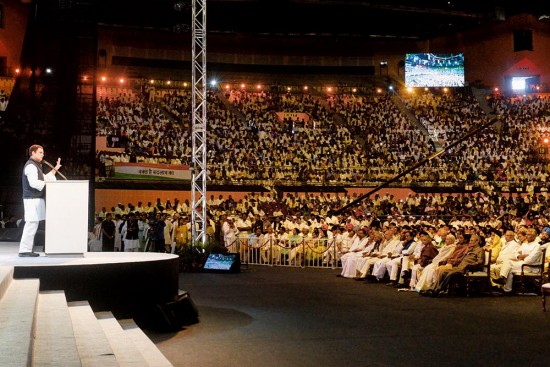 It was not easy for Rahul Gandhi to keep the Congress old guard off the stage at the recently concluded plenary session. He met with strong resistance from the seniors in the party when he suggested that all of them sit on the chairs below, along with the party workers. They couldn’t comprehend a seating arrangement like that. They argued it is a 133-year-old tradition, which exists so the workers can see them, and that they cannot have their backs to the workers. None of the arguments cut any ice with Rahul. Putting his foot down, he said everybody, including him, are workers of the party. And with this, the Congress president put his stamp not only on the plenary proceedings, but also on the party—quite in keeping with the theme “Change is Now”. There were no further arguments as the younger leaders took centrestage with structured discussions on issues like social justice, Vision-2020 and the state of the media. The visual symbolism was meant to reset the dynamics, with him at the centre of course.

“Rahul wanted it to be like the convention of a democratic party and not a gathering of some men and women, seated on an elevated stage, pontificating to disconnected workers,” says Sam Pitroda, a long-time associate of the Gandhi family, who worked closely with the party president in organising the plenary along with Priyanka Gandhi. He was also a close associate of late prime minister Rajiv Gandhi, shaping the developments in the IT sector. He now heads the party’s overseas department, and organises Rahul’s international outreach and visits abroad.