The Maharashtra governor may be the leading contender, but the race for the president's post could still go down to the wire. More on Presidential elections 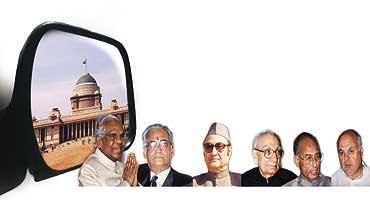 outlookindia.com
-0001-11-30T00:00:00+05:53
Last year, when President K.R. Narayanan cancelled his annual summer vacation—he wasn't keeping well—the general consensus was that he was in too poor health to contest a second term. But a year later, not only has Narayanan gone off on a summer sojourn to Ooty but has even indicated that he wouldn't refuse a second term, provided there is consensus on his continuing. He would not, however, be a candidate, in case of an election.

The situation has triggered off a Narayanan vs P.C. Alexander debate in political circles in Delhi. The BJP and its NDA partners have decided to back Maharashtra governor Alexander while the Left and the Congress want Narayanan to continue. But which of these two old school friends from Kerala will finally pip the other at the post?

The NDA says it's all for a consensus, but not for Narayanan. Says a cabinet minister: "We have nothing against him. But it is against precedent for a president to stay on for more than one term." The NDA argument is that India's first president, Dr Rajendra Prasad, was the only incumbent to serve two terms as he didn't get tenure as vice-president. A BJP MP points out: "After Rajendra Prasad, many people asked for a second term. Nehru refused it to Dr Radhakrishnan and if anyone merited a second term, it was him. Rajiv Gandhi incurred Zail Singh's wrath by refusing him a second term."

But 'there-is-no-precedent' is not an argument the Opposition is buying. Notes CPI(M)'s Somnath Chatterjee: "We also have no precedent for a 28-party government. Dr Rajendra Prasad stood for a second term, and he got it. The Congress has also indicated that Narayanan is its candidate."

The NDA was quick to evolve a consensus around Alexander. It was George Fernandes who initiated the discussion at an NDA meeting last fortnight. Says a government source: "No one spoke in favour of Narayanan. It was then decided that the PM should try for a consensus with the Opposition. If the Congress insisted on Narayanan, then the NDA would field Alexander as its candidate."

In Alexander, the NDA feels it has found a perfect foil to Narayanan. Both are Keralites and academically inclined. While Narayanan is from the IFS, Alexander is from the IAS. Narayanan is 81 years old, Alexander 82. The two also studied together in Kerala. In fact, when Narayanan was V-P and Alexander Maharashtra governor, the two were invited to speak at a function in Nagpur University where the former recalled that Alexander stood out with his debating skills in school. In turn, Alexander praised Narayanan for his distinguished contribution to public life. It was bonhomie all the way.

The NDA's choice of Alexander is just Act One of the ongoing drama. According to the script, Act Two will follow when Vajpayee meets Sonia Gandhi. A meeting is on the cards before he leaves for Manali on May 20. More to the point, Narayanan is expected to return to Delhi from his Ooty holiday on May 22. He will then let it be known if he is willing to change his earlier desire of being a consensus candidate and contest an election as the Opposition's choice. The NDA hopes Narayanan will say no to a contest. Their reasoning is that for the president to go around the country canvassing would be demeaning to the high office.

Interestingly, a source close to Narayanan says, "The Constitution clearly states there will be an election for the president's post. Nowhere does it state that there will be a consensus. So how does contesting a second term demean the office? Is precedent more important than the Constitution?"

According to a PMO source, Vajpayee will first try for a consensus on anyone other than Narayanan. If Sonia Gandhi agrees, then he would hand her a list of NDA nominees. To this end, ruling coalition partners have been asked to come up with names.Mamata Banerjee has indicated that she wants someone from the minority community. Bal Thackeray has said that the person should be chosen on merit and not for his community. MDMK's Vaiko is clear that he wants Alexander. The National Conference is offering Farooq Abdullah. The BJP is offering L.M. Singhvi and the RSS has nominated Hindi heartland governors Vishnukant Shastri and Bhai Mahavir.

But the Congress says none of the names on the list will be acceptable to Sonia. Says a source: "The BJP and RSS names are rejected outright. And Farooq is too flamboyant for the top job." The Congress is finalising its own counter list. Dr Karan Singh is a front-runner. But he can hardly be a consensus candidate. The BJP has not forgiven him for campaigning against the PM in the '99 Lok Sabha elections. Ironically, the anomaly of Congress nominee Karan Singh's soft Hindutva background is sort of offset by the BJP candidate's son, Abhishek Singhvi, who is a Congress spokesperson.

In case of a deadlock, no one is ruling out the chances of V-P Krishan Kant emerging as a 'consensus candidate'. Central Hall gossip puts him down as the dark horse. Kant is hoping Chandrababu Naidu will support him as he did during the V-P elections, but so far the TDP hasn't committed to any candidate. It has, however, decided to toe the NDA line, ruling out Narayanan for a second term.

The PM apparently raised the matter informally with Naidu when the latter called on him in Delhi last week. Vajpayee's aides also claim even the AIADMK and the Nationalist Congress Party support Alexander's candidature. NCP leader Praful Patel agrees: "If a consensus is built around Narayanan, we will be happy. But he has himself said he will not agree to a contest. In which case, we will be happy to support Alexander." Tongue firmly in cheek, he adds: "He has also been principal secretary and advisor to Indira Gandhi and Rajiv Gandhi. We support him because of his Congress past!"

Unfortunately, Alexander's past does not ensure him Sonia's support. Although it was the Congress that offered him his first term as Maharashtra governor, it was the Shiv Sena that recommended him for a second term. Says a Congress MP: "The fact that Alexander accepted without even consulting the Congress powers-that-be rankles."

Much is also being made of Alexander being a Christian. The BJP rumour mill has it that Sonia will never agree to him. Asks a BJP MP: "How will the country accept a Christian PM in Sonia Gandhi when it already has a Christian president?" The Congress dismisses the argument saying if it gets the numbers no one can stop Sonia from becoming PM. The Congress line is that it is not against Alexander, but why look for someone else when Narayanan is there. But privately they admit the Christian factor could be a deterrent.

So with the NDA adamant on refusing him a second term, will Narayanan agree to contest against his former schoolmate? Says N. Ram, close friend and Frontline editor: "There is no precedent that says you cannot have two terms. But I don't think Narayanan will agree to a contest. He does not want to be made an object of division." Rashtrapati Bhawan sources, however, refuse to commit either way. The ball is now in Narayanan's court.

The Killing Terraces Of Shangri La