Quite Up To The Watermark

The rupee marches on. But can India's exports cope with a weakening dollar? 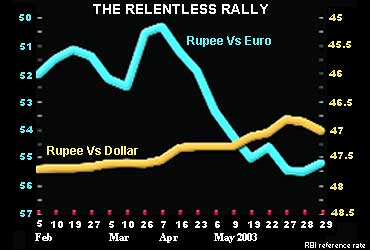 illustration by Jayachandran
Arindam Mukherjee June 09, 2003 00:00 IST Quite Up To The Watermark

outlookindia.com
-0001-11-30T00:00:00+0553
Indian economists and corporate analysts are grappling with a unique problem these days—for years they have been used to making all their calculations based on an almost routine depreciation of the rupee against the US dollar. But in the last one year, the rupee has, in an unprecedented and relentless rally, appreciated against the greenback. From a level of around Rs 49 to a dollar in May 2002, the rupee today stands just above 46. And the climb is still continuing. All predictions have gone awry and everything is being reworked—exporters and corporates, especially in the infotech sector, are in a tizzy. No wonder, both these sections are witnessing a fall in their margins.

Experts attribute the rally to the depressed sentiments in the US economy and the subsequent weakening of the dollar. That's why, says Ashima Goyal, professor, Indira Gandhi Institute for Development Research (IGIDR), the rupee is depreciating against most currencies but becoming stronger vis-a-vis the dollar (see chart). According to her, since the rbi continues its policy of accumulating forex reserves to prevent the rupee's undue appreciation, only a weak dollar can explain the former's climb.

Still, better economic fundamentals may have lent a helping hand in the rupee's upward march. After all, India's forex reserves are in a better position now than ever before in the history of the country's balance of payments. Foreign exchange has galloped and grown to $78 billion from $40 billion in December 2000. Between March 2001 and December 2002, India's external reserves increased by $28 billion.

Our current account, which has been showing a deficit for long, recorded a surplus last year—the first time in over two decades. Experts even say it might remain thus in the foreseeable future. Add to it rising productivity, a fall in international oil prices and an excellent export performance despite a depreciating dollar. Thanks to relaxed forex rules, dollar inflows too have increased, primarily from non-resident Indians. In fact, a number of economists say that nris are borrowing globally at 150 basis points (1.5 per cent) above the libor (London Interbank Offered Rate) and investing in India, where interest rates are higher and one can easily earn a 3-4 per cent arbitrage.

But what's good for some is bad for others. Ask people in the IT sector where analysts are working overnight to figure out how fortunes might change. Estimates indicate that in the short term, every per cent appreciation in the rupee leads to a 0.4-0.5 per cent dip in the operating incomes of software firms. Others say a similar appreciation can reduce ebitdas (earnings before interest, tax, depreciation and amortisation) by 1.5-1.8 per cent. And for bigger companies, the same impact on the rupee can depress their EPS (earnings per share) by about 2 per cent.

Most software companies have contracts valued in dollar terms, with the top 10 having as much as 90 per cent of them in that currency. No wonder large companies like Wipro have seen their last quarter operating margin shrink by 1 per cent. On an annual basis, the impact was 3.5 per cent. Wipro has already stated that even its current quarter earnings could be hit. Industry experts are of the opinion that if this continues for long, companies would find the going increasingly difficult. Explains Ravindra Datar, principal analyst, Gartner Group: "There was already a pricing pressure on Indian companies. A climbing rupee will impact them further and companies' rupee growth may be hit."

Exporters, struggling to keep up their price competitiveness and shares in a stagnant market, too are in a tight spot. If this were to continue for long, soon they'll also start feeling the squeeze. Says Rafeeque Ahmed, president, Federation of

Indian Export Organisations (FIEO): "The rupee appreciation and dollar depreciation is affecting our costs and profitability.The global scenario has changed and we cannot increase our prices because of competition. Our margins are far less today. Even that may be wiped out if the climb continues for

another couple of months." Exporters add that since over 65 per cent of India's exports are in dollars, any further appreciation could spell doom for them.

That is bad news. Especially since forex experts fear further appreciation. The rupee, they say, is still undervalued by about 2.5 per cent on the basis of real effective exchange rate (REER). Also, the RBI may find it difficult to control the appreciation in the coming months. Worse, no one expects the US economy to turn around dramatically and push the dollar up in the near future.

Despite this, the RBI is not perturbed. "We are rather comfortable...we feel the movement is adequate, looking at what's happening in the international market and the kind of currency alignments taking place internationally.... We will continue to act so that there is no instability," said RBI's deputy governor Rakesh Mohan recently. He also stated that the RBI had not set any target for the exchange rate. The central bank has not only acquired dollars from the market at a fast pace to keep the rupee down, it has also accelerated the liberalisation of rules related to availability of foreign exchange for people and companies. But none of these measures have helped.

However, independent analysts do not agree with RBI's strategy. Says Kanhaiya Singh, senior economist, National Council for Applied Economic Research (NCAER): "There is a limit to RBI's sterilisation and it's approaching fast. It has been in the business of supporting the currency for far too long. It has already drained out almost 30 per cent of domestic assets. RBI should bother more about containing inflation than the exchange rate. If inflation is taken care of, the nominal changes in the exchange rate will be nullified." Adds Soumya Dutta, forex expert and cmd, eforexIndia.com: "RBI's policy is actually making the rupee stronger. It is not trying to devalue but is trying to slow down the appreciation. And by constantly opening arbitrage, it is increasing money inflow into India."

But, the question on everyone's mind is whether there are any benefits of the appreciation in the medium to long run. Explains Goyal: "The appreciation comes at a good time for the economy. It will lower the price of imports. This will benefit corporates whose demand for imported capital goods should be rising as the economy enters an upswing. It should further stimulate investment in the economy. The fall in oil prices will help lower inflation and this is already happening." Singh says the country can seize this opportunity to wipe out the nagging oil pool deficit. He says value of exports may reduce, but due to low import costs and thus, low input costs, value addition can be increased. It may also be a good time for companies to source their capital goods from overseas, as long as the dollar remains subdued.

There could be other advantages too, like paying off external debt, as the depressed dollar will put less pressure on the country. The government has not wasted time and has already stepped in to retire debt. In the last few months, it has pre-paid over $3 billion of India's external debt. That's not all. Finance minister Jaswant Singh and his team are also working on a new strategy to reduce India's dependence on external aid. In fact, it is preparing to give aid to fellow developing nations and least developed countries in Africa and Asia. There are already indications that in the coming months, more of India's high-cost debt may be paid off.

On the flip side, economists say, the current developments could be an eye-opener for Indian exporters and companies that have always been heavily dollar-eyed.As the rupee has continued its downward march against all other currencies, primarily the Euro, there may be huge untapped markets waiting for them outside the US or dollar transaction areas. And when European countries have shown interest in Indian products and expertise, there is no reason why Indians should shy away from them.