Quiet Flows The Ganges Of Sin

Her cause—sexual abuse of children, an uphill battle against society in a city like Varanasi 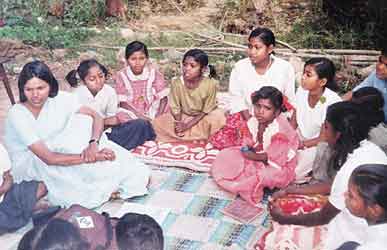 "Help me! I’ve locked the door, but I think he’s trying to get in through the ventilator," stutters 10-year-old Pooja (name changed) into the phone. Abused sexually within her own home by her own uncle, Pooja knows only one person who can help-----Ranjana Gaur. Ranjana and her band of volunteers at the Social Action Research Centre (SARC) whisk Pooja away quickly. Eventually, after intense counselling and intervention, they hope the girl can return home, safely.

Convincing Pooja’s parents of the incestuous abuse is tough, because this is Varanasi—a traditional, morality-bound city where discussing anything sexual is taboo. But Ranjana, who receives an average of 21 such calls each month, knows this is the easiest part of the battle. She also has to fight false fir cases accusing her of spiriting away girls for prostitution, apathy and inaction by the police, even government hospitals that refuse to acknowledge a rape to save themselves additional hassles. She has woken up to a mob pelting stones at her house at 2.30 am and has had to go underground several...