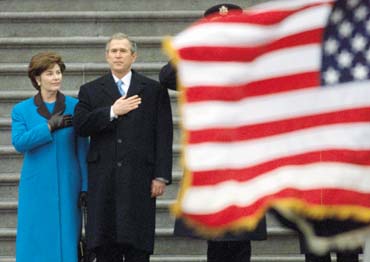 outlookindia.com
-0001-11-30T00:00:00+0553
The inauguration ceremony is now distant memory, the controversy over the electoral system has been reduced to mere academic interest, and the great Indian hope of the United States of America electing yet another Democrat President lies buried—and forgotten. The fact that George W. Bush will occupy the White House for the next four years has raised apprehensions whether the thaw in Indo-US ties under Bill Clinton would, once again, freeze under the new administration.

No wonder the Indian constituency felt reassured by Secretary of State Colin Powell's observation in his confirmation hearing before the Senate Foreign Relations Committee that India is "a country that should grow more and more focused in the lens of our foreign policy". "We must," Powell said, "deal more wisely with the world's largest democracy. Soon to be the most populous country in the world, India has the potential to help keep peace in the vast Indian Ocean and its periphery. We need to work harder and more consistently to assist India in this endeavour, while not neglecting our friends in Pakistan."

Perhaps the applause of Indians was premature, reflecting more their concern over the future of Indo-US relationship post-Clinton than any dramatic spelling out of the new administration's intent. The South Asia Bureau of the administration is still not in place, nor has Bush undertaken any policy initiative. Says Stephen Cohen, a leading Indian expert at Brookings Institution: "There could be some minor adjustments in Bush's India policy but no major changes will be made because the opening to India has already been made. Everything I've heard from Powell and Bush publicly indicates they are going to continue that policy."

Signs of continuation of the Clinton approach to India dramatically came to the fore after the Gujarat earthquake. Not only did the US offer assistance to the tune of $5 million but President Bush personally talked to Prime Minister Vajpayee and commiserated with him at the tragedy.

For nervous Indian officials, accustomed to the attention Clinton showered on India and Indians, a continuation of the policy crafted by the previous administration is in itself good news. But breakthroughs can be hoped on the continuing economic sanctions, which India views as unfair and the American businessmen dislike intensely because of its potential to damage their interests. These also stand in the way of some of the World Bank and Asian Development Bank loans to India. The other indicators suggesting improvement in ties will have to include Washington's acceptance of India as a nuclear power; support for India's ambition of acquiring permanent membership of the UN Security Council; and removal of military and dual use sanctions.

But some of these—removal of dual use sanctions and acceptance of India as a nuclear power—is unlikely to happen. Cautions Michael Krepon, president of the Stimson Center: "If both Washington and New Delhi stick to economic matters, relations will be extremely productive. If either capital focuses on nuclear issues, relations will suffer. If India, during the Bush Administration, takes initiatives to raise the profile of nuclear weapons, including the resumption of testing, then it is back to 1998 (when Indo-American relations dipped to a new low, though perhaps not as low as during the Bangladesh War)."

Adds former ambassador Teresita Schaffer, who has extensive experience of South Asia and is now with the Center for Strategic and International Studies: "The things that basically determine the relationship are pretty well set. There is one exception to that, though. President Bush has made it clear that he opposes the current draft of the ctbt. Since he took office, statements of officials of the new administration are a lot more carefully nuanced than they were during the campaign. So I am not sure what they are trying to do—renegotiate some clauses or enter reservations? But ctbt will become a much less important issue between India and the US. Issues like (economic) sanctions would take much longer (anywhere between weeks to a few months)."

Powell is already reconsidering sanctions against various countries (75 at last count). During his confirmation hearing, he even suggested that when Congress imposes sanctions, it should insert a sunset clause of, say, one year. All this should be good news for India.

Yet no one yet wants to hazard a guess about the future contours of the relationship, largely because India's image in the US keeps shifting with bewildering rapidity. Before the cold war, declassified records show that the Americans wanted to mobilise democratic India against communist Soviet Union. Prime Minister Jawaharlal Nehru's reluctance saw Washington embrace Pakistan, obliging it with pro-Pakistani statements and resolutions on Kashmir in the UN Security Council, though these were neutralised because of the Soviet veto.

Several decades later, Clinton brought about a change in Washington's perception through his enunciation of the now-famous 4Rs (restraint, reduction of violence, respect for the LoC and resumption of communication) as the framework for defusing tension between Indian and Pakistan. Obviously, the factors guiding the change varied from the fear of the subcontinent becoming a nuclear flashpoint to the threat Islamic terrorism poses to US interests.

The thaw in Indo-US relationship under Clinton was also due to the emergence of the pro-India business lobby with interests in India, the India Caucus, which with its over 100 members is the largest such body in the House of Representatives, and 1.5 million Indian-Americans, many of whom occupy top positions in Silicon Valley and other corporations. They went a long way to refurbish the Indian image.

But the old mindset continues to dominate. In early 2000, the National Defence Academy, a military think tank, pronounced that since the three major nations of Eurasia—Russia, China and India—are too nationalistic, their views would sometimes coincide and conflict with those of the United States. Again, the Pentagon declared last year that a strong Indian Navy would interfere with the primacy of the US Navy in the region and was consequently not to be welcomed. Similarly, the conflict over Kashmir was portrayed alarmingly, with dire warnings of a nuclear conflagration unless settled amicably.

Yet all this might change because of the study the Rand Corporation undertook, in consultation with representatives of 60 think tanks and the two political parties, during last year's election campaign for the benefit of the new president. The report, titled Global Trends 2001: A Dialogue About the Future with Non-government Experts, said: "We recommend that your South Asia policy begin by decoupling India and Pakistan in US calculations. US relations with each state should be governed by an assessment of the intrinsic value of each country to American interests."

The report further suggests: "India is becoming a major Asian power and, therefore, warrants an increased level of engagement and appreciation of its potential for both collaboration and resistance across a much larger canvas than South Asia. By contrast, Pakistan is in serious crisis and is pursuing policies counter to US interests. The United States should increase pressure on Islamabad to stop support for the Taliban, to cooperate in the fight against terrorism, to show restraint in Kashmir, and to focus on solving its own internal problems." Rand then specifically recommends "strengthening relations with India".

Still, in this proposed "strengthening of relations", Washington's reservations will play a determining factor. And Powell expressed these during his confirmation hearing: "This (befriending India and not neglecting Pakistan) is a delicate process in the midst of what by any accurate account would be labelled an arms race between these two countries... Recently, however, there have been encouraging signs, including India's extended moratorium on operations in Kashmir and Pakistan's restraint along the LoC."

It consequently seems it would be near impossible to convince the Bush administration, just as it was true of earlier presidents (Kargil was the sole exception), that the two sides are not equally restrained on Kashmir. During the Clinton administration, India repeatedly asked the US to declare Pakistan a terrorist State. Washington didn't accede because Islamabad doesn't in any way directly threaten US interests. But what disappointed New Delhi was that the US did not brand even the Lashkar-e-Toiba as a terrorist outfit. It isn't clear whether Washington will now be more forthcoming on these issues.

One issue which may draw the US closer to India is Sino-American relations. After extended talks with Chinese leaders, Clinton, who was later to hail India as a "natural ally", described China as a "strategic ally". Obviously, a strategic ally is more important than a natural ally, taken for granted as the latter is. By contrast, Powell said about China: "We will treat China on its merits. A strategic partner China is not. But neither is China our inevitable and implacable foe..." It is also believed the Republican administration will keep a close watch on human rights violations there.

Both Russia and China are perturbed over the Bush administration's assertion that it would go ahead with the Nuclear Missile Defence (nmd), a system of nuclear shield aimed at protecting the US and its allies from missile attacks of so-called rogue states.

The Chinese have been more agitated than the Russians on the nmd issue. Unlike the Russians, who don't think there would be a war with the US, the Chinese think Taiwan is a potential flashpoint between Beijing and Washington. Beijing feels that the only way to secure American neutrality is by having the capability of trading Beijing for San Francisco or New York in a possible nuclear exchange.

Could the nmd and other issues push Washington to look to India? Experts feel that hopes of India replacing China as US' strategic partner in the region is dim. Says Michael Krepon: "The US will never ask India." This is because India is yet to emerge as a global economic engine, as powerful as China. Second, Washington can't come too close to India lest it antagonises Pakistan, which might accentuate instability in the region. Third, Washington has other trusted allies, like Japan, in the region to rely upon.

Teresita Schaffer sums it up well: "I don't think Indo-US relations are going to be terribly very different from the old administration."

Rebuilding Gujarat: How To Contribute