Rani Mukherji is Heroine No. 1. She is not Madhuri, not Kajol, not Ash. She is the girl next door. 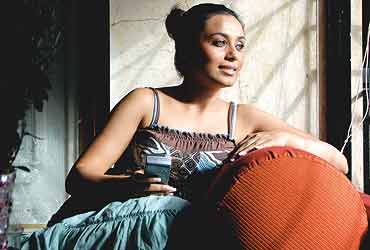 "With Rani around, you can never realise how big a star she is," concurs Jaideep Sahni, who scripted her most recent hit, Bunty Aur Babli. How big? She has been part of some of the blockbusters of the last two years which have raked in about Rs 160 crore for the industry. At number 10, she is the only woman to figure in Filmfare's Bollywood power list. At a rumoured Rs 2-2.5 crore, she's among the highest-paid actresses. "Our industry might still be hero-dominated but she has the best track record among heroines," says distributor Sanjay Mehta. "She is a great performer, has bagged the most sought after productions and has all the big banners and heroes in her kitty," says Komal Nahata, editor, Film Information.

Priyanka Gandhi is a fan, so seems Manmohan Singh. She is a star presence at all the state dinners, be it in honour of General Pervez Musharraf or the Singapore PM. For an industry that has been desperately searching for Heroine No. 1 ever since Madhuri Dixit and Kajol quit, Rani is Queen of Hearts, finally. "The media has always been asking me, why not you (as No. 1). Now they are telling me, yes it's you. I feel happy to make my family, my parents feel proud," she says.