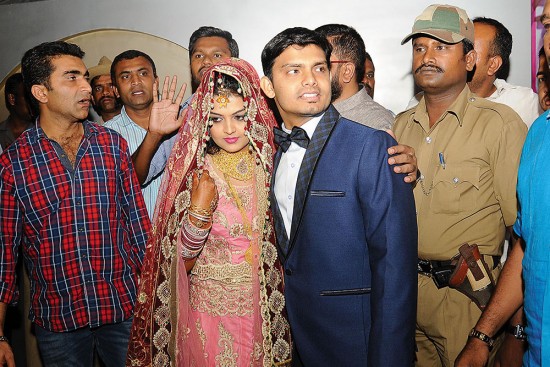 It was a ‘bandh’ day. But you couldn’t tell from the busy highway that cuts through Mandya—the ‘City of Sugar’, 100 km southwest of Bangalore, where vast cane fields make up the horizon and the chimneys of the 83-year-old MySugar factory the skyline—or from the bustling arteries of the town. At a prominent crossroad, though, there lay a half-burnt tyre, apparently an early effort by a few firebugs who, it turned out, were later chased and caught by the police. There was to be a wedding the next day—a love marriage—and the sugar bowl wasn’t losing any sleep over it, barring a dozen or two who were out marching with a banner in the streets. And, outnumbering them, marched a posse of policemen close behind.

The wedding had become the talk of the town, nay even the country, as Dr H.V. Narendra Babu, father of the bride, put it. To be sure, he seemed edgy last Saturday after the calls for a ‘Mandya bandh’, never mind that nobody paid any heed to it. A policeman with a gun and in a grey safari suit stood at the porch while a police van was parked outside the gate. The security had been accorded to him after a group of right-wing activists took it upon themselves to oppose his daughter Ashitha’s marriage with her Muslim friend. This was nothing but ‘love jehad’, they had cried. But...