Some say the Sharia courts offer speedy and cheap justice. Others say they are regressive. 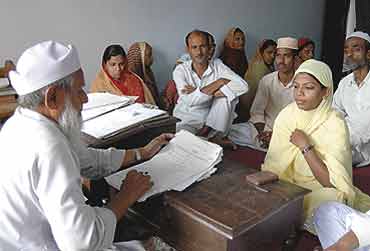 Of course, that's one view. Others feel these courts save the poor from the clutches of lawyers and long-winded court battles. Take the Imarat-e-Sharia at Phulwari Sharif in Bihar, the country's oldest and largest Sharia court. Says Maulana Anees-ur-Rahman Qasimi, the general secretary of the institution: "We provide speedy and cheap justice. If there is a problem pertaining to Muslim personal law, we deal with it rapidly. Every year our qazis settle 1,000 to 1,500 disputes. In some cases, if the parties are not satisfied with our judgement and take the dispute to civil courts, our verdicts are referred to and followed." The Imarat-e-Sharia is an old institution that still trains most of the qazis who are then sent to other parts of India. At one point Maulana Azad had wanted to become its president.

But there is another aspect to the debate. Ever since the Shahbano issue blew up in 1985, a watershed for both minorityism and right-wing Hindu reaction, the AIMPLB has devised a strategy to discourage Muslims from taking issues pertaining to their personal laws to civil courts. Those in control of the board were gripped with the fear that if non-Muslims started settling personal law disputes, they would start interpreting the Sharia in their own way.