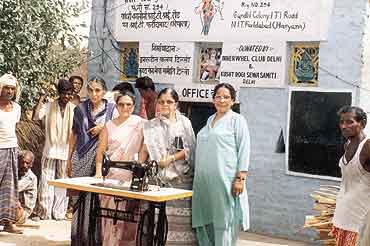 outlookindia.com
-0001-11-30T00:00:00+0553
Red spots had appeared on the arms of the English lady. To the untrained eye, they looked like blister scabs left behind by angry cigarette burns. A friend shows concern and drives the lady down to see a doctor. His diagnosis? Early stages of leprosy. The verdict is delivered in gentle, understanding tones. Yet, it sounds like the pronouncement of a life sentence. The lady breaks down and the friend instinctively embraces her and says: "Bev, it's only a disease. You're strong and you'll fight it."

The year was 1953 and the friend was Pushpa 'Pushy' Khanna, wife of an army officer. Pushy was then twentysomething, the mother of two daughters and a lady of leisure with a fairly hectic social life. Despite all this, she still would find time for the wives of her husband's troops.

The image of the distraught Englishwoman never went away. Some 15 years after the incident, Pushy had an inner calling, and her life was drawn to a larger purpose: the counselling of leprosy patients. Unlike her English friend, the patients were victims of neglect, ostracised and alone. The only one who seemed to care was Pushy's spiritual guru, Swami Ranganathananda of the Ramakrishna Mission. Says Khanna, "He urged his devotees to take up the cause of leprosy patients. In response, his devotees in Delhi founded the Kushtrogi Seva Samiti. Many of us came forward. Some were doctors, others housewives like me."

While the doctors treated the physical aspects, Pushy's role was to heal the patient from within. Leprosy attacks the nerves but more than that it has devastating effects on the mind. Patients lose self-esteem and their sense of purpose. The psychological scars appear long before the physical deformities. "You won't lose your fingers and toes if you detect the disease early and follow the entire multi-drug treatment programme," says Pushy. "You can lead a normal life and nobody will ever know you have leprosy. It certainly isn't the end of the world." This is the message she drums into patients reeling from the shock.

But bringing dignity into the lives of those deformed was a different matter. For this, some hard decisions were taken by the samiti in the mid-'70s. For one, begging was banned. The segregation of healthy children from their leprosy-afflicted parents was another. Despite the trauma of separation, parents realised this was not an act of cruelty, but one of compassion. Kids had to be protected from the disease and the stigma attached to it. To this end, a children's home was set up at Majnu ka Tila on land donated by the administration.

The parents, meanwhile, wandered along the banks of the Yamuna and headed towards Faridabad, where they camped in jhuggis. The arrangement was far from satisfactory. They lived in filth and there was a real fear of the disease spreading. A panchayat called by the samiti came up with several constructive ideas to make them self-sufficient. Cottage industries like poultry farming, soap-making units, weaving and cycle repair shops were started which today sustain Faridabad's community of leprosy patients. Work has replaced begging and dignity has found a place in their otherwise wretched existence. The Faridabad administration also lent a hand with dry rations. And Dr and Mrs Nelson of the Baptist Mission set up a dispensary. Once donations poured in, the jhuggis were demolished and pucca quarters came up in their place. "These were built by the patients themselves. Initially, the ones with mutilated hands and feet came to me and said they couldn't possibly do it themselves. I told them they could because they were building their own homes," she says. Remarkably, they accomplished just that despite their physical disabilities. The colony they built has acquired both social acceptance and a patriotic name: Bharat Mata Kusht Ashram.

Now Khanna divides her time between the samiti and the dermatology opd at the All India Institute of Medical Sciences. Dr L.M. Bhutani, a central figure in the anti-leprosy drive, insisted that she counsel patients at aiims too. Patients here are a mixed lot: students, housewives, executives, cooks, ayahs. "My message to them is don't give up, don't feel sorry for yourselves and don't lose your dignity." Of the five million leprosy patients in India, at least a few will take heart from her words. (To offer assistance in any form, contact Pushy Khanna in Delhi. Ph: 6315683)