Pushing The Envelope On Borrowed Money

Ballooning debt will eat up disinvestment proceeds, at the cost of crucial infrastructure spending 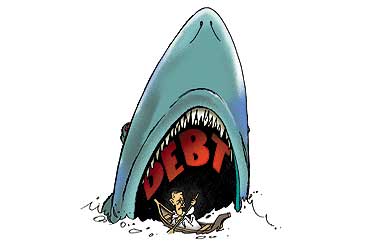 outlookindia.com
-0001-11-30T00:00:00+0553
The season of the sun and innumerable pre-budget financial autopsies has returned. Yashwant Sinha and his lieutenants have again locked themselves up at North Block, shuffling money between pockets to desperately improve the sarkari fiscal profile. And failing, as usual, to correct the ills gnawing away at India's macroeconomic stability—persistent high fiscal deficits and a rising public debt, India's chicken-and-egg.

There's little the budget can do. The large fiscal deficits, averaging over 5 per cent of the gdp for almost half of last decade, has substantially neutralised Sinha's monetary flexibility. In 2001-02, the budgeted FD stands at Rs 1,16,314 crore, a jump of over 30 per cent from Rs 88,937 crore in '97-98. With a continuing stark revenue-expenditure mismatch, the Centre is forced to borrow more and more. As on February 2002, the net central borrowing stands at Rs 89,001 crore, almost three-and-a-half times the '96-97 level of Rs 26,356 crore. There's more. International credit rating agency Standard & Poor's projects this year's consolidated direct debt of India's state and central governments plus the ones guaranteed by them to approach 85 per cent of the gdp.

The rapidly worsening situation has provoked Moody's to revise its latest outlook on India's domestic debt to negative and caution the current trend of unsustainable public finances that's leading inexorably to a "debt trap". Which is: the twin cancers of deficit and debt will constrain the gdp growth prospects, the pace of poverty alleviation and social reforms. Lower economic growth, in turn, will impact income, weaken tax revenue, widen deficits and push the debt trajectory.

Explains Atsi Seth, analyst, Moody's Investor Service: "With the absence of significant non-debt-creating means to finance the growing deficit, government debt has grown from 49.6 per cent of the gdp in 1996-97 to about 56 per cent now. This will require huge resources to service it in the future."

Along with the debt, the interest burden has also become more acute. The budgeted outgo for 2001-02, at Rs 1,12,300 crore, accounts for 30 per cent of the total central expenditure and almost half of the revenue receipts (Rs 231,745 crore). This, says Seth, leaves little for development expenditure, so critical to drive demand during recession.

It is precisely this quality of spending of the borrowed amount that bothers economists like Shubhashis Gangopadhay of the Indian Statistical Institute. "We are not putting our debt into avenues where the return is higher than the rate of the market borrowings. Are we adding the debt to invest or to repay?" he asks. The repayment pressure on domestic market borrowings has forced the Centre to curtail capital expenditure (read roads, agriculture, etc) over the last three years—from Rs 36,996 crore in '99-2000, it's dropped to Rs 30,641 crore in the current fiscal.

What's aggravated the crisis are the old and costlier debts. Despite the steady softening of interest rates, the Centre reaps little benefit. As of January 1, 2002, almost 75 per cent of the debt stock of Rs 5,07,896 crore carries a coupon rate of over 11 per cent. Primary market dealers say that's the average rate of interest paid by the Centre, with old debt rates going up to as high as 13 per cent.

With inflation a little over 1 per cent, the effective real interest rate is almost 10 per cent. Compare this to the bank rate of 6.5 per cent or the benchmark yield on a 10-year government paper ruling at less than 7.25 per cent. Data with pnb Gilts suggest that the Centre pays over 13 per cent and more on debt worth Rs 3,3192 crore, still higher than the bank plr of 11.5-12 per cent, while the debt stock of Rs 2,19,479 crore has a coupon rate of 11-12 per cent.

If the corporates are saving Rs 2,540 crore in interest rates through refinancing old debts, why can't the government, wonders the market. There is actually a little technical glitch. "Gilts do not carry a call or put option, thus the Centre has to necessarily service the high-cost debt," says Arun Kaul, MD, pnb Gilts. But it can always opt for refinancing, post a notification to bail itself out. Or else, to begin with, the disinvestment proceeds should be redirected to retire debt and not pumped back to the budget.

The need for urgent revenue generation becomes imperative in the current gloom. But the industry's nearly choking with a 2 per cent growth, non-oil imports dipping to record lows and exports in stasis. The revenue deficit's been creeping up—from Rs 46,449 crore in '97-98, when Sinha took over, to Rs 77,369 crore (revised estimate) in 2000-01. With ground-level implementation of expenditure control being the most politically difficult, what is the way out?

"In a slump, tinkering with tax rates won't help much.... Disinvestment has to be the flavour of the season with rationalised tax collection," feels Kaushik Dutta, partner, PriceWaterhouseCoopers. Though the exercise is slowly gathering momentum with the vsnl, ibp sell-offs, only 50 per cent of the Rs 12,000-crore target is likely to be met this year. Adds Seth: "The piecemeal sales with inordinate delays have depressed the company valuations (read vsnl) as international and domestic markets now remain subdued."

But even as it emerges the best short-term solution, economists are already chalking future strategies. "Political opposition will be minimal in sell-offs from the buoyant sectors where we need to focus more aggressively. As problems persist with the laggards, valuations will have to be transparent," says Subir Gokarn, chief economist, ncaer, adding, "selling them is not enough. What the buyer gets to do with it is equally significant."

A year ago, Sinha's statistical jugglery to highlight improved revenue receipts was thanks largely to higher dividends and profits from psus. This time around, with extraordinary dividends from ibp, vsnl alone yielding Rs 2,250 crore, and possibly even ongc, the earning prospects have improved. For 2000-01, the total dividend surplus, including the profit of rbi, nationalised banks and FIs, is pegged at Rs 14,159 crore while for 2001-02, the estimate is Rs 16,229 crore. But "taking money out of one pocket to keep it in another is not sound fiscal management," says Saumitra Chaudhuri, economic advisor, icra.

Taxation is possibly the most crucial block for revenue. For three out of the last four years, the government's actual tax receipts have fallen invariably short of not only the budget estimate, but also the revised estimate. This year, for the first 10 months (April-January), net direct tax collections stood at Rs 47,287 crore against the full year target of Rs 85,275 crore—55.4 per cent of the budget estimate. Even on the indirect tax front, the collections are 63.7 per cent of the Rs 1,40,142 crore target for the full year. Customs revenue alone has dropped by 14.29 per cent.

With administrative and legal loopholes, the tax regime needs urgent restructuring. According to a pan-India Income Tax Statistics of 1997-98, the number of IT returns reporting an income of Rs 10 lakh and above was estimated at 12,575! Another study by the National Institute of Public Finance & Policy (nipfp) unearthed 89 per cent of citizens in A-class Indian cities not filing returns. "The deterrence effect of the sanctions in law against evasion is still weak," says Amaresh Bagchi, professor emeritus, nipfp.

According to Gangopadhay, "the much better way is to look for taxes which are cheaply enforceable." Thus, he would recommend a service tax of Re 1 for every Rs 500 transaction in the bank. To him, the approach through the income route may not be successful due to lack of records. "Taxing services won't help, revive manufacturing. Most self-employed professionals evade tax. The ones recorded are infrastructural services like banking," he adds.

Any economist will proffer a list of must do's to contain the crisis. The Fiscal Responsibility and Budget Management Bill—seeking a specific timetable to bridge the fiscal gap—would be just one. But the Bill is now bereft of its harsh provisions like quantifiable limits and penalties. With populism taking over economic logic, the question remains: Will politicians ever stop from turning the clock back?