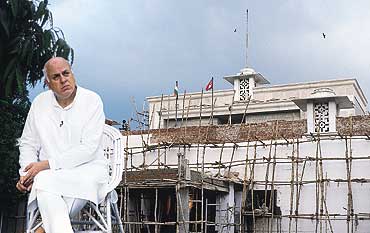 outlookindia.com
-0001-11-30T00:00:00+0553
His flamboyant and extravagant style has many complaining in hushed tones. As chief minister of a turbulent state, many wonder why he spends more time on the golf course than in the state secretariat. But Farooq Abdullah is brazen enough to say "I'll continue to play golf and dance or do whatever I like. I do it to keep my sanity. Let people say whatever they want."

So, what's Farooq's latest fad? The chief minister recently directed the state Project Construction Corporation to refurbish the J&K House in New Delhi's posh Prithviraj Road area. And it won't be a simple repairs job. Instead, it's an exorbitant renovation exercise, expected to cost the state exchequer a whopping Rs 6 crore.

Why Rs 6 crore? Because Farooq Abdullah isn't just extravagant, he also has good taste. Nothing less than Italian marble will do for him. The corridor that leads up to the four-room complex housing the CM's suite is being laid out in different varieties of Italian marble. As is the flooring in all four rooms—the visitor's room, the dining area, the living room and, of course, the CM's bedroom. Mansara, a design and architecture firm, has been hired as consultant for the project. Nearly 100 labourers have been working overtime since April to give the building a swanky new look.

And Farooq, in his inimitable style, isn't apologetic. Says he: "Yes, we are spending Rs 6 crore because the entire building is being redone. The damn thing was going to collapse. A portion of the roof fell on my secretary's head. I would have been the next target. I am not spending government money on myself. J&K House is important because it is the face of our government in Delhi. We don't have to resemble drab government buildings. Besides, nobody sees what other people are spending."

Spending such an amount on renovation is a scam not only because the CM's suite is being laid out in marble or that a steam bath is being added for the CM's comfort, but because schools and bridges destroyed in the early '90s in Kashmir are still to be repaired. Out of a total of 430 destroyed or damaged bridges, only 250 have been restored so far. Similarly, of the 780 damaged schools, 200 still stand out as a "tribute" to the "might of the militant gun".

Development activity has been practically at a standstill, and nothing much, save a few projects, has come up to help the locals. For instance, the Khudwani bridge in Anantnag, which was burnt in 1993, was rebuilt at a cost of Rs 2.75 crore. The bridge connects Khudwani to Kulgam and benefits at least 20,000 people. Similarly, the Akura bridge, which connects two major roads in Anantnag, makes the lives of some 15,000 people easier and was repaired at a cost of Rs 2.87 crore. Schools, on the other hand, were repaired for much less. The Higher Secondary School in Yaripura, where 2,000 students resumed their studies, was reconstructed for a sum of Rs 46.61 lakh. The Government Middle School in Pansgam (Kupwara) cost just Rs 1.50 lakh to repair.

Soon after becoming chief minister in October 1996, Farooq, in his first speech to the people of the state, had said: "At this point, it is pertinent to glance on the past seven years. These years have been so catastrophic and bloody that even a mention of them sends a chill down one's spine. People of the state, particularly of the Valley, have gone through such tribulations that their chronicle can be found either in their wounded hearts or in the gloomy eyes of us all. Our paradise-like land was soaked in blood. Arms and ammunition used for blood-letting and destruction, which are better kept at the desolate borders, were brought into the people's homes and hearths. Schools were burnt and the future of our children was made bleak. Hospitals were converted into ammunition dumps instead of being used for healthcare.Petty workers were deprived of their hard-earned bread. On the other hand, the corrupt and black-marketers became rich. Our roads, bridges and numerous other public utilities which had become available to Kashmiris for the first time in the history were destroyed."

When he came to power, Farooq had vowed to "embark on the task of bringing light to the darkness". But if today the National Conference is nervous in constituencies like Handwara in north Kashmir's Kupwara district, it is largely because the people are disillusioned with Farooq's tenure. His personal flamboyance has only angered the people more.

According to Vikas Kumar, the project officer overseeing the renovations, all of 2,500 sq ft is being laid out in Italian marble. According to Kamal Sethi, salesman at the Dee Pearls showroom from where the marble was bought, the J&K Project Construction Corporation bought two qualities of Italian marble—Creama, which costs between Rs 250 and Rs 350 per foot, and Statuario, which is more expensive and the prices range between Rs 350 and Rs 700, depending on the lot. More money is being spent on the Dholpur stone which is being used on the facade. Arches and pillars are being constructed to improve the look of the state house. New furniture and ACs have been ordered, all for a house where the CM and his staff stay when they are in Delhi and where the state resident commissioner too has an office and a residence.

"All this is not for me but for the next chief minister," says Farooq. The building, he points out, won't be ready until after the polls currently under way in the state. But Farooq is optimistic that the NC will come back to power, and, as a bonus, the property will continue to serve the family. So, if it won't be Farooq Abdullah, it will be Omar Abdullah.

Ironically, both father and son are once again concentrating on development—more schools, hospitals, water and electricity—in the election campaign. But the common man is wary and feels it's a replay of 1996 when the same poll pledges were made. Farooq's political opponents are cynical but not surprised with his opulence. "What was the need of building another golf course in Srinagar when there is already one? Farooq enjoys the perks of power but shuns all responsibility," says Yousuf Tarigami, a CPI(M) leader. The pdp's Mehbooba Mufti, another opponent in the electoral fray, also speaks of the government's non-performance, linking it to the chief minister's personal extravagance.

Meanwhile, Farooq is living it up. World-renowned golf architect, Robert Trent Jones Jr II, has been asked to lay out the Royal Springs Golf Course spread over 300 acres with an estimated cost of Rs 25 crore. When asked why another golf course was necessary, Farooq says: "I am preparing for better times ahead. We are a tourist state." Call that a pre-emptive strike, Abdullah style.