Can you manage waste? Get a charge out of what desi cows can’t digest.

More from Debarshi Dasgupta
View All

The ‘gaumata’ will be saved, and it will probably be her bowel movements that does it. Giving ideology a backseat, employees at the Kanpur Gaushala Society (KGS) are getting their hands dirty churning out products from cow dung and urine. It’s their own cow-and-bull story, and it’s out to prove that the bovines make economic sense, and hence deserve protection. The KGS, closely linked to Hindu nationalist organs RSS and BJP, recorded a turnover of Rs 2 crore last fiscal, proving that what goes out really has a market.

The KGS product profile now ranges from mosquito coils to aftershave lotions, from face packs to phenyl. But it is their newest offering, released earlier this year, that has really put them on the map. Goloka Pay is a cold drink concentrate laced with distilled cow urine (five per cent of total volume!) which is doing reasonably well in the market. The idea of creating a soft drink first came when Baba Ramdev lashed out at Coke and Pepsi (reportedly their sales plummeted after the rebuke). “That was when we began work and came up with this healthy alternative. Along with urine it contains herbs like tulsi, brahmi and shankhpushpi. It has done well so far,” says P.L. Toshniwal, the KGS general secretary. It comes in orange and lemon flavours and over 500 one-litre bottles of the concentrate have sold so far and another batch is being readied.

The KGS, in fact, is in diversification mode, now manufacturing even tiles and radiation-absorbing distempers. Of course, all their products use cow dung and urine, which comes from the over 1,500 cows they have in the four branches they have in the state. Founded in 1888, KGS even has a section dedicated to demonstrating how bulls can be a source of “alternative energy”. It’s no rocket science, a pair of bulls yoked to a wheel will turn machines like a water pump or a thresher. Another wheel and you can charge a battery to power 120 CFL lamps. As Toshniwal, a former industrialist puts it, “Why send them to the slaughterhouse when they can work for you?” 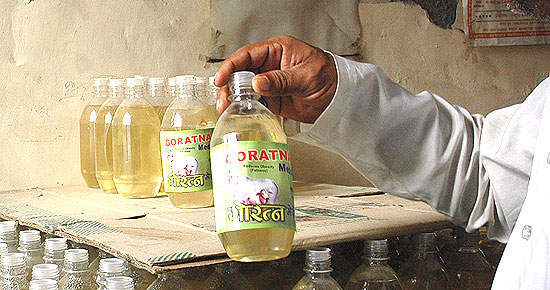 Love In The Crosshairs: Honour Killings Still Continue In India