What does a movement look like, and feel like? The human spirit, in all its joyous colour, is unfurled across a whole landscape that’s become a modern, mobile Kurukshetra. 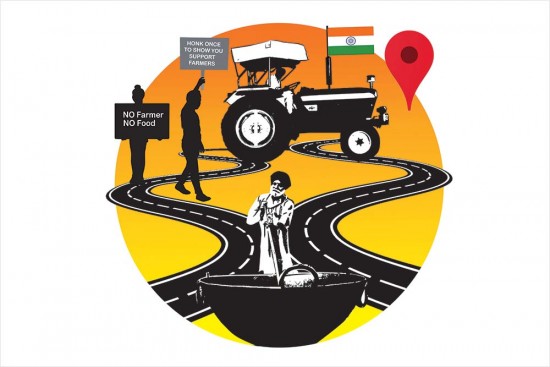 Beyond the borders of the capital, a tapestry of sights and feelings give depth to our understanding of the farmers’ protest. A road journey from Delhi to the Wagah-Attari border and back reveals a kalei­doscope of emotions—anger, frustration, unity, bonding and, of course, perseverance. That an agitation can be peaceful and conducted without the help of a ‘toolkit’ or propelled by recklessness can be seen on the highways of Punjab and Haryana. The kinnow juice sellers even add a sweet and juicy taste to it!

A Snarl, Then Verdant Bliss

The 500-km drive from Delhi’s ITO to Amritsar’s Golden Temple usually takes about nine hours even if you take two longish snack breaks en route. But Delhi Police, jittery after the chaotic Republic Day agitation, with a break-out to the Red Fort, has made travel till Sonipat, Haryana, a nightmare. Traffic is diverted well ahead of Singhu border and the road that cuts through the villages of Lampur are congested, unruly and risky. There are no metalled roads for long stretches. Probably caught in administrative wrangles between the governments of Delhi and Haryana, the narrow roads through Safiabad and Safoli are incomplete, resemble Himalayan rally roads and are a great test for your car’s suspension! A 90-minute drive is now a two-and-a-half hour ordeal.