Post-GST business thins to a trickle for small units. Time has again come for Kovai to prove resilience. 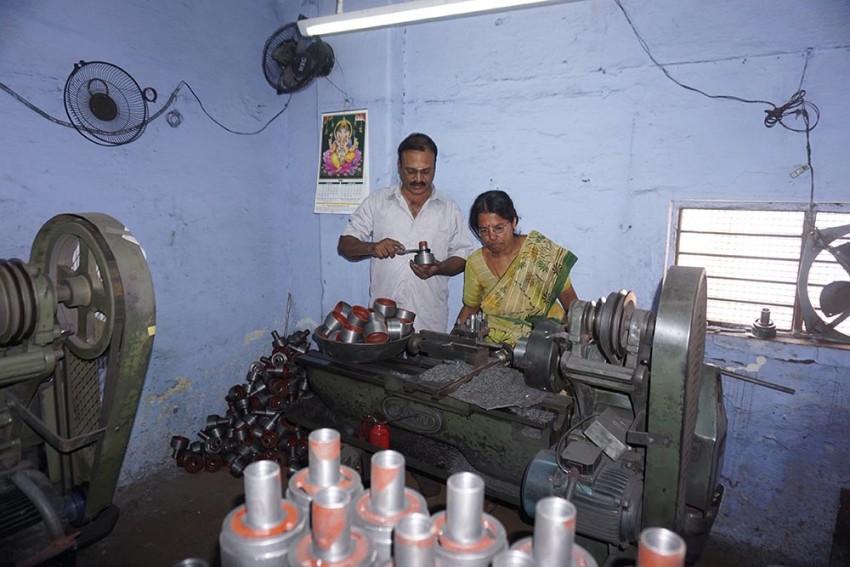 Chip In
A homemaker joins to save labour at the family’s workshop
Photograph by G.C. Shekhar
G.C. Shekhar February 15, 2018 00:00 IST Pump Makers Are Gasping 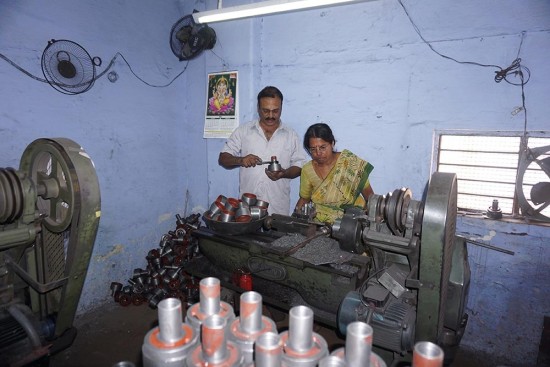 The decrepit tile roof above him symbolises the plight of Prathap Sekar’s small machining unit in one pocket of the city. The 34-year-old Coimbatorean is no more sure of a recovery in his business. “First, the demonetisat­ion (of November 8, 2016) slowed down my machines. Then the GST (goods and services tax, on July 1, 2017) has shut them down,” he bemoans.

For the last three months, orders that Sekar used to get from a leading pump manufacturer and good old clients have thinned to a trickle. This January they stopped completely. “I still have some 200 pieces of motor end covers the pump company had ordered,” he points out. “I cannot blame them. For, they are yet to get about Rs 20 lakh as GST refund.”

He has asked his four employees to find jobs elsewhere till the situation improves. Sekar himself is working part-time in another machining unit to make sure that his wife and their school-going daughter do not go hungry. Coimbatore, which is home to hundreds of such tiny industrial units, teems with similar tales of woes in the wake of GST. Not only has the GST pushed up steel cost, I have to now borrow from local moneylenders to pay my GST by the 20th of every month.
J. James, Manufacturer of pump parts

Sekar, whose annual turnover is just about Rs 6 lakh, comes in the non-GST bracket of below Rs 20 lakh. Yet his pump manufacturer has asked him to enrol for GST to claim input tax credit from the job-work he gives to Sekar. So instead of paying no GST, Sekar ends up paying 18 per cent GST for the parts he supplies to the pump-maker. Before the GST regime, he, as someone running a micro industry, used to pay just the income tax since he enjoyed zero tax even under VAT (value-­added tax). “Once the micro industries doing such job ord­ers for bigger companies enrol for GST, they lose their GST exemption even if they fall below the Rs 20-lakh limit,” points out V. Sundaram, president of the Coimbatore District Small Industries Association (CODISSIA). “It is unfair to charge 18 per cent GST for general engineering job works, when the government has lowered GST for job works in textiles and leather industry. This anomaly warrants correction.”

Unlike Sekar, J. James is an independent manufacturer of pump parts. He buys his own raw material and has invested in computer-aided design and manufacturing machines for making high-end parts for submersible pumps. With an annual turnover of Rs 50 lakh, he used to pay only VAT of 12.5 per cent and 2 per cent excise duty for his parts. Today, he coughs up 18 per cent GST for the same parts. “Not only has GST pushed up steel cost, I’ve to now borrow from moneylenders to pay my GST by the 20th of every month. For, they levy a fine of Rs 50 per day for delayed payments,” reveals James, who heads the local association of tiny industries. “Also I have to cough  up Rs 2,000 every month to an auditor to file my returns.”

According to a tax inspector, Coimba­tore has nearly 10,000 unregistered tiny ind­ustrial units supplying parts to manufacturers of textile machinery, pumps and motors, wet grinders and other type of electrical and non-electrical machines. “These units dealt solely in cash. Dem­onetisation forced many of them to transact through banks,” he discloses. “Post the GST, they also come under the tax net since the manufacturers demand proper billing. The transition is hurting them, they’re fighting it back.”

But industries are adapting fast, as no one wants to lose business. Bigger players are going out of the way to ensure that the GST doesn’t buffet the micro and small units that are integral to their supply chain. “We are lending our acco­unting experience to them, training these units in bookkeeping and making them computer-savvy,” says Pricol chairman Vanitha Mohan, who heads the Coimba­tore chapter of Indian Chamber of Com­merce. “They must thrive for us bigger manufacturers to survive.”

Demonetisation slowed down my machines. GST has shut them down. God knows when they will spring back to life...
Prathap Sekar, Owner, small machining unit

Resilience has been a feature of riverine Coimbatore, which is the state’s second-­largest city (after Chennai) . At the height of a power crisis in 2009 and ’10, smaller units went together to invest in shared power generators and operated in shifts so that no unit needed to close down. “True, our turnover and profits dipped as our full production cycle was not met but we at least did not allow our machines to rust for lack of power,” points out R. Ramamurthy, vice president of the 1969-founed CODISSIA.

Ultimately, GST would create a more level playing field, as everyone will be paying taxes and transparency would improve efficiency, argues M. Ramji, a chartered accountant. “The GST infrastructure needs to be strengthened, as the GSTN is in a perennial state of hanging. Once the E-way bill kicks in, it can get only worse unless the network picks up,” he points out. Also, the irritants surr­ounding the E-way bill, such as the movement of unfinished goods, need to be addressed. “How can you impose a 50-km limit within which unfinished goods will not carry an invoice?” Ramji argues. “Coimbatore’s industrial belt extends up to 80 km on all sides. Such impractical rules will kill the industry.”

Unfazed by the GST hiccups, local industrialists are already planning big for the future. Recently, the Centre anno­unced a Rs 20-crore fund to set up a defence manufacturing innovation centre in Coimbatore, where the MSMEs can design and make prototypes for the defence industry. “The necessary skills and technology are available here. What we need are greater opportunities,” says Sundaram. “If such innovations lead to a defence park in the long run, Coimbatore will be flying high.”

By G.C. Shekhar in Coimbatore

Yet Another Check-In Plan