Pulpit High On Above

Stephanians not only make good babus and diplomats, they also make interesting jholawalas and lapsed Naxalites. 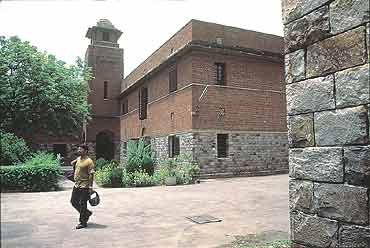 Tomorrows India: Another Tryst With Destiny
By Edited By B.G. Verghese
Viking/Penguin Pages: 400; Rs 595
Earlier this month, a newspaper and a TV channel reported that some iit alumni had combined to form a political party. What was fascinating was not the revelation that our engineers also have a social conscience but the remarkable indulgence the media showed to it. Would our editors have been as generous if, say, some tiresome Stephanians decided that electoral politics could only be salvaged by the intervention of the erstwhile "gentlemen (and, for that matter, ladies) in residence"?

St Stephen’s College suffers from a quaint image problem. Judged by the admission criterion, it is about as selective as the iits. Yet, while they are seen as "elite" institutions, Stephen’s is tarred "elitist". Tinpot populists of all hues have waged a ceaseless jehad against everything they perceive Stephanians to be: snooty, arrogant, deracinated, dilettante. If the college hadn’t been protected by the minority tag, it would long ago have fallen prey to the outlanders’ envious savagery.

It’s a class war centred on values. Mastery over the curriculum was never the Stephanian priority: it was an effortless offshoot. The unspoken thrust was on building intellectual stamina, a euphemism for cleverness, and imbibing a culture of civility. Being a true Stephanian meant the ability to stand apart from the bazaar but not be aloof.

The subtext of these essays by Stephanians, published on the college’s 125th anniversary, is that Stephanians not only make good babus and diplomats, they also make interesting jholawalas and lapsed Naxalites. Apart from an outstanding self-critique by Dilip Simeon, they tell us more about the professional expertise of individuals than about their Stephanian identity. It would have been more rewarding had Mani Aiyar held forth on Arun Shourie than pontificated on panchayati raj. Or had Harsh Mander informed us he was a normal Stephanian before he became one of India’s most self-righteous bores.

Two attributes were drummed into me at Stephen’s: don’t be too earnest and don’t take yourself too seriously. This festschrift, sadly, violates both.