TN can now have non-Brahmin priests. Will caste Hindus agree? 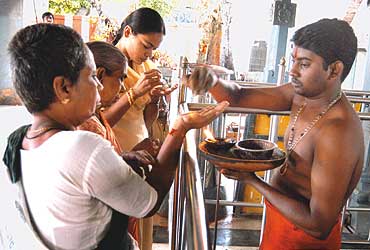 How would the GO impact Hindu practice? Here are some pointers:

It's not as if non-Brahmin communities are not involved in priestly duties in Tamil Nadu (TN). In most Amman temples (of mother goddesses) and other folk and caste-specific deities in TN, the priests belong to various non-Brahmin castes, including Dalits. What has been contentious is the appointment of non-Brahmins to Shaivite and Vaishnavite temples, claiming legacies of over a thousand years. Priesthood in these temples has come to be held by sub-sects within Brahmins and in most cases the rule of hereditary, familial succession is followed. These temples, expected to conform to agamic rules, are bigger and also generate higher revenues. (Agamas are manuals that deal with abstract theology as well as rituals, temple-building, image-making, and modes of worship.)

Though right-wing outfits like the vhp, Hindu Munnani and the Federation of Hindu Organisations have welcomed the move, the practical challenge before the government is to find qualified, certificate-holding, non-Brahmin candidates. Presently, the HR&CE department runs four agama pathshalas (schools that train priests) but officials aren't sure if non-Brahmins are being trained here. The Veda and agama pathshalas traditionally admit only Brahmins. When the Agama school at Palani was opened to non-Brahmins in the late '80s, the guru resigned, and the school was closed. When it reopened, Brahmins wouldn't go there. Then J. Jayalalitha proposed an outfit called the Tamil Nadu Institute of Vedic Science in 1991 (later renamed Veda Agama Education and Research Academy), but it never took root.