If all that these ads claim is true, how come we as citizens have not seen any change? And can't the money be put to better use? 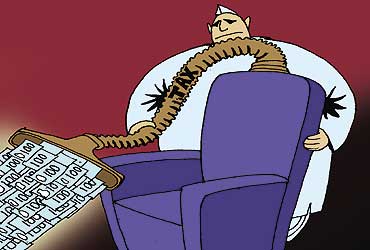 outlookindia.com
-0001-11-30T00:00:00+0553
Are you aware that you just gave away half a crore of your rupees to Shri Anant G. Geete, minister for power? You also gave it away to Dr Murli Manohar Joshi, minister for human resources development; Uma Bharati, minister for coal and mines; Sukhdev Singh Dhindsa, minister for chemicals and fertilisers; M. Kannappan, minister of state for non-conventional energy sources; and T.R. Baalu, minister for environment and forests. The people of Haryana, Maharashtra, Chhattisgarh and Punjab gave it to their chief ministers. On Indira Gandhi's death anniversary, you gave it to the Delhi government. You must be angry. Why wouldn't you be? Because you know you did not give it away. So was it stolen? Well, you can say, as good as. If some greedy person takes half a crore rupees to enhance his personal image without so much as asking you, you have every right to be livid. Just look at the newspapers, I am not asking you to read them. People have possibly not reacted because they turn a natural blind eye to it. The stuff is not normally read except by those who put it in and beguile themselves into thinking that the whole world is not only reading it but believing every word printed. I am talking about this trend of government ministries using taxpayers' money for full-page colour ads in leading national dailies for odes to themselves, that extol their ministries, their achievements and generally glorify themselves along with colour pictures of themselves. And, it is our money. Hey, it's our money! (I am shouting!)

For people who live in Delhi it is doubly galling to read, "three years of sustained performance power sector turn around has begun." Sure fooled me. Even worse, it's in bold capitals. With the ubiquitous power cuts, the "three years of sustained performance" missed our boat. The best is yet to come. There are diagrams that detail that the national grid cumulative inter-regional transfer capacity has increased from 3,400 MW in 1997-1999 to 4,950 MW. And it will increase to 10,000 MW by 2005. Get it? Doesn't matter. You are not supposed to. There are minute diagrams of capacity addition, power sector reforms in states, generation performance, financial performance of power sector cpsus. If you are not asleep already, there are tall claims that "all villages will be electrified by 2007 and all households by 2012." And, to rub salt into the wound "nearly 2,100 roadshows conducted throughout the country in 2001 itself to sensitise opinion makers, media persons, students and general public on the need for power reforms and strategy for power sector development." I weep just thinking of how much of our money went into these roadshows. It would be more beneficial if the public put up roadshows for the ministers to sensitise them to our problems.

The unkindest cut of all is Narendra Modi's two-page ad in a national newsmagazine, which came along with a highly professional CD, with specially created music. He even says in it that "the Samras Village scheme has made Gujarat villages dispute-free and vibrant". With Gujarat now an international term for communal violence and seriously affecting investment and commerce, the people of Gujarat have paid not only in their suffering but also paid for the man's self-aggrandisement.

I would tell these self-advertising ministers to take a page out of Arun Shourie's book. Beleaguered as he is, Shourie took the time to write and give real information in a series of articles in The Indian Express about the problems he faces in his ministry and what needs to be done. That kind of stuff is not only read, it has credibility.If all what these ads claim is true, how come we as citizens have not seen the change? And, couldn't this money be put to better use? For example, wouldn't it be better to put the money into improving the horrendous working/living conditions of coal miners rather than paying half a crore to announce "3 YEARS OF GROUNDBREAKING PERFORMANCE BY COALS AND MINE MINISTRY". Or fixing the toilets in a few schools instead of taking out a full-page colour ad announcing again, "GLORIOUS 3 YEARS OF ACHIEVEMENTS" in the HRD ministry.

Does it even occur to these ministers that the money they spend is not their personal income to do with as they please? Why are they not accountable for such wasteful expenditure? For every question one asks, you get only two answers: 1. It's all very well for you to talk and criticise. You live in air-conditioned homes and drink whisky (I don't drink whisky). We know the masses. (Do you really? But, didn't you do your best to get out, to get into a ministerial air-conditioned home, car plus all benefits, paid for by us? Okay, well forget the whisky.)

2. There is no money. We are short of funds and resources. (How come there is always money for vip security, felicitating ministers and boring political functions? Sometimes all three at the same time!)

Politicians like these with funds and unaccountable power just bring home what P.J. O'Rourke said: "Giving money and power to government is like giving whisky and car keys to teenage boys." We have to look at where our money is going like any investment and right now it doesn't look good. What do you do in any bad investment? Pull out. The way this government is going in terms of getting votes, it may be a good idea to not consider the money they take from you as taxes. Consider it a quick deal stock option that will change as soon as the ceo's replaced and the company changes hands.

(The writer can be contacted at madhuoutlook@yahoo.com)