He is the 'big man' of defence deals. Nanda's network cuts across party lines. 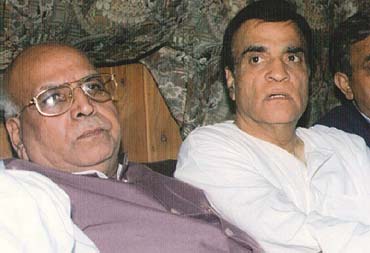 outlookindia.com
-0001-11-30T00:00:00+0553
Soon after Admiral S.M. Nanda hung up his boots after the 1971 war, his son Suresh Nanda, who was a lieutenant commander, followed suit. He joined his father's nascent company Crown Corporation and worked his way into the international arms trade.

Today, Nanda is arguably the biggest name when it comes to the Indian defence market. Bureaucrats, service personnel and other arms dealers refer to him as the "big man"—someone who has a vast network of friends and informers in the ministry of defence (MoD). It is they who come in handy while swinging mega deals as well as nixing the deals of his competitors. In fact, defence ministry sources say that while Nanda has a major stranglehold over naval purchases, he is also associated with companies that deal with spare parts for Russian equipment for the army.

For years Nanda has been in the headlines for all the wrong reasons. In November 2002, he made an abortive attempt at losing his tag as an arms dealer. He was nominated as an independent Rajya Sabha aspirant, egged on by BJP dissident MLAs from Uttar Pradesh and a few Congress members. His opponents allege that he was ready to spend huge sums of money to get the Rajya Sabha seat. Earlier, his son Sanjiv Nanda, was accused of mowing down five people in Delhi in his out-of-control BMW. But a few years later the case fell apart as key witnesses turned hostile, which many attribute to the payment of large sums of money.

Now in the headlines for his alleged involvement in the Barak missile and armoured recovery vehicle deals, Nanda is known to have powerful politicians as friends. His contacts, say sources, cuts across political parties. In fact, an analysis of his call records by an investigating agency revealed his links with several BJP and Congress MPs. One Congress MP from Maharashtra, also a member of the parliamentary standing committee on defence, is known to be particularly close to him. Similarly, he is linked to a close relative of former prime minister Atal Behari Vajpayee.

It did not take long for Crown Corporation, which began as a military spare parts firm, to grow into an organisation brokering big- ticket defence deals. One of them was the HDW submarine deal. Nanda also made a major foray into the hospitality industry. His company took over the Claridges chain of hotels and after a successful arbitration bid also took over the Sea Rock hotel in Mumbai.

For now, CBI officials are sceptical about tracing the vast sums of money that has allegedly changed hands in the Barak missile and the armoured recovery vehicle deals. It only has details of the Rs 2 crore paid by Nanda to George Fernandes and Jaya Jaitly. The arms dealer, who operates out of London, has not been questioned so far by the CBI

So Many Slugs In The Underbelly