The PM's Rs 3,750-cr package does not address the real issues 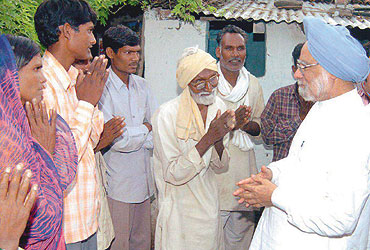 outlookindia.com
-0001-11-30T00:00:00+0553
As he travelled through the suicide belt of Vidarbha, PM Manmohan Singh was moved by the hopeless plight of distressed farm families. But even as he announced a Rs 3,750- crore relief package, as many as 11 farmers ended their lives; four more suicides followed in the next few days. The Vidarbha suicide index touched an alarming high of 612 since last June, as tracked by the Vidarbha Jan Andolan Samiti. Activists say as relief packages go, this one offers a band-aid in a situation that called for a major corrective surgery.

Of course, the plus is that no less than the PM himself felt the need to take stock of the situation. The visit is a wake-up call to his cabinet colleague from Maharashtra, Sharad Pawar, Union agriculture minister. Equally, it's a rap on the knuckles for the Vilasrao Deshmukh-led Congress-NCP government that pretended nothing was seriously wrong. The PM's interest has meant that there is recognition, however belated, of the Vidarbha situation in particular and rural indebtedness in general. The quibbles over the package will appear later this month when the i's are dotted and t's are crossed in government circulars. Still, it's possible to evaluate the package in terms of what the PM wants to offer the distressed farmer. Reports upon reports, including three by the National Commission on Farmers (NCF), pointed out that most suicides can be linked to high outstanding debt. But the package does not offer debt waiver—the one relief that farmers desperately want. "This means the PM is saying: I can rehabilitate your widow after your death. Without debt- waiver, a package is meaningless," points out Kishor Tiwari, president of Vidarbha Jan Andolan Samiti.

The package offers two specific consolations: interest on outstanding debt from institutional lenders has been waived and farmers can apply for a fresh line of credit in the ongoing sowing season. While the latter offers them a mere straw in the wind, the former makes a mockery of the situation. It shows those who worked out the package have little clue of ground realities. It's well known that maximum credit—as high as 90 to 93 per cent—is from private credit lines, either a stream of moneylenders or the local politician (who at times doubles up as the moneylender like Dilip Sananda, a Congress MLA) or even input dealers. The compounded interest, calculated at unimaginably high rates, is the final straw. Traditional moneylenders are beginning to face the brunt—frustrated farmers killed some of their ilk last month. So, a package that doesn't address all outstanding debt and interest is of little value. The write-off on institutional interest is therefore a relief for the banks, not the farmers.

The package is also resoundingly silent on high input costs, low remunerative prices, alleviation of problems caused by Bt seed and incentive for alternative crops like jowar. Vidarbha farmers needed high levels of credit thanks to the high input costs determined by the Bt seed. Marketed by MNC Monsanto-Mahyco, a 450 gm packet cost Rs 1,800 till recently when a MRTP directive forced the company to reduce "technology cost" and bring down the price at one stroke to Rs 750! Compared to Rs 300 for a kilo of the prevalent H4 seed, it was still exorbitant. Yet, the Deshmukh government aggressively pushed it, getting Marathi actors to endorse it on 40-second TV commercials. Farmers were led to believe they would have to spend less on pesticides with the worm-resistant Bt seed. But as farm activists point out, bollworm affected both kinds of crop; in fact, the Bt seed required more expensive pesticides.

Coupled with this was the low output price. The state government withdrew the advance bonus of Rs 500 per quintal last year. The minimum support price was brought down to around Rs 1,700 per quintal last season though the Congress-NCP had made a poll promise in 2004 to keep it at Rs 2,700. If farmers managed to beat the bollworm and lack of irrigation to get a crop, it just would not fetch them a good price. "If Bt seed was banned in Andhra Pradesh, why was it promoted by state agencies in Maharashtra and sold at rates that benefited the multinational?" asks Vijay Jawandia, farm activist. 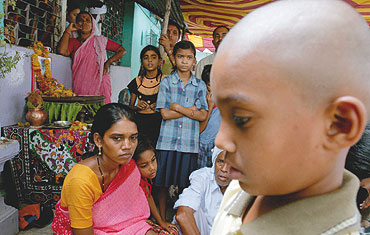 Even if remunerative prices were paid and interest rates brought down to four per cent as recommended by M.S. Swaminathan, chairman, NCF, it would make little difference unless import duty on cotton was re-assessed. It now stands at a mere ten per cent while sugar attracts 60 per cent. There's rich irony in that cotton-related industries are booming while cotton growers commit suicide. Says Prof Ajay Dandekar, an economist who authored the Tata Institute of Social Sciences report on farm suicides: "America has dumped 500 per cent more cotton in the last five years. Indian industry buys cheaper imported cotton. If the government wants Indian farmers to match market price, it must match the subsidies that America and the EU give their cotton growers."

Let's see how the Rs 3,750 crore adds up. A massive chunk of Rs 2,177 crore is for irrigation projects over the next three years, Rs 768 crore towards interest waiver, Rs 180 crore for seed replacement, and Rs 165 crore for livestock. It does not put anything concrete into the hands of the distressed farmers. In that sense, this follows the classic "book entry and jugglery" pattern such packages are wont to where allocations from one programme are transferred to another. It hardly addresses the prevalent crisis. "Suicides are not the crisis, they are a symptom of a deeper agrarian crisis," says journalist P. Sainath who has worked on the issue for over two years. "The difference between a suicide and non-suicide household is the loss of the bread-winner. The desperation is the same."

Vidarbha is not unique. Suicide registers in Andhra Pradesh, Kerala, Punjab, Haryana, now of onion growers in Nashik, are testimony to the desperation. The time for band-aids is long gone.