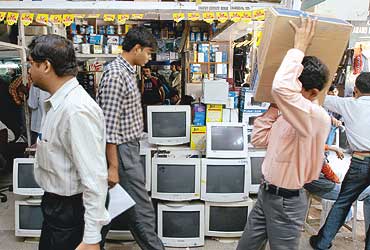 outlookindia.com
-0001-11-30T00:00:00+0553
They are global infotech's two biggest names. They have conquered the world with their products and strategies. Now both have India in their crosshairs and are forming strategies to get a lion's share of the ever-growing Indian IT pie. It's destination India for the world's largest chipmaker Intel and software giant Microsoft, because they feel this is where the future action would take place.

On June 3, Intel announced a new Platform Definition Centre in Bangalore, that would define and design the corporation's future products and strategies. Microsoft, on the other hand, chose India as one of the six countries where it has launched its new version of Windows-XP meant for the masses. The first of these products—the low-cost Windows-XP Starter Edition—was launched in India on June 2. It has lined up several other initiatives for the coming months. Top officials, including Americans, are already distributing visiting cards printed in Hindi.

The increase in the global giants' focus on India stems primarily from a dismally low PC penetration here. Currently, only nine out of 1,000 people in India own a computer, in contrast to China where it's five times greater. Only 18 per cent of India's 8 million small and medium-sized businesses own a computer. Both companies, however, feel that India has the potential to outdo China in the next two years in PC adoption and usage. Says Will Poole, senior vice-president, Windows Client, Microsoft: "There's a huge opportunity in India and it goes beyond government and business. There is a huge mass in the domestic arena, in the middle class, who are Windows PC consumers. This segment has a tremendous potential to grow."

Says Ketan Sampat, president, Intel India: "The bulk of the next phase of consumers, we believe, will come from India and China". Intel feels Asia would be the world's top consumption market for PCs, servers and notebooks in the next 4-5 years as it is seeing the biggest absolute growth of over 40 per cent annually.

As it is, Asia is Intel's top billing destination with 45 per cent of its billing coming from here. Within this, India is the fastest growing and most promising market. Intel feels that India's market is poised to grow further as 45 per cent of its population is under 25 years of age and would be instrumental in driving PC and IT usage in the country. Intel's decision to set up the Bangalore centre is being seen as an attempt by the corporation to expand its presence in the emerging markets in the face of near-saturation in developed markets like the US and Europe. 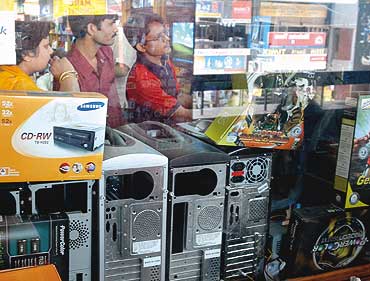 Recently, Intel adopted a new strategy under which the focus would be on platforms with a combination of products rather than products alone. The success of its wireless Centrino platform encouraged it to reorganise the company into five platform groups—mobility, digital homes, digital enterprise, channel platform and digital health. Henceforth, product platforms would be developed in these areas and the Bangalore centre would play a prominent role in it.

Says Anand Chandrashekhar, VP, Intel: "It's an attempt to establish localised technology centres to meet the needs of the local population in India and South Asia. The Bangalore centre would define technologies to suit local needs in terms of features, pricing, usage and delivery, access and affordability of PCs among the broader population." The Bangalore centre is significant for India as it is one of just three such centres announced by Intel across the world. The others are in Sao Paolo, Brazil, and Cairo, Egypt.

Intel's exposure to India is already quite big. The existing Bangalore Development Centre has over 2,500 engineers—one of the largest outside its US installation—and is an important design and development site with several technology groups working on different fields of technology development. Last year, it started a design lab in Bangalore and, this week, it announced plans to set up an assembly and test manufacturing facility in India with an investment of $400 million—a decision communicated to IT and communications minister Dayanidhi Maran during his recent visit to the US.

Also, apart from the US and Israel, development of the company's advanced microprocessors would be done in its Bangalore facility. Some of its next generation server platforms are already being developed in India. The new Bangalore centre is expected to be fully functional by the next quarter of this year and release products from the second half of next year.

Like Intel, Microsoft is also trying to put its best foot forward in India. It has tied up with the Uttaranchal government under its Gyanotkarsh project aimed at enabling the PC to reach the common man and launched its new version of Windows-XP aimed at first-time PC users. The Windows-XP Starter Edition is a stripped-down version of the actual product and has most of the features a first-time user needs. Also, to suit non-English speaking people, the product has been launched with a Hindi interface. Says Ravi Venkatesan, chairman, Microsoft India: "At less than 1.4 per cent penetration, India is among the world's most under-invested PC markets. The key barriers to adoption and use are relevance and affordability. This is intended to help address these issues." Adds Rishi Srivastava, business group lead, Microsoft: "You have to build the right product for the people. Over 85 per cent Indians do not speak English."

Microsoft plans to take the project to other Hindi-speaking states in the coming months and to non-Hindi ones with local language interface by the year-end. The first of these would be in Tamil Nadu. The Starter Edition would be followed by XP Media Centre and products aimed at different segments of Indians.

PCs with the Starter Edition are available for as less as Rs 399 a month, while those with Windows XP Media Center Edition, aimed at more evolved users seeking digital entertainment, would be available for about Rs 30,000. Intel, too, has tied up with leading banks like sbi, Bank of India and Indian Bank to extend financing options to consumers. It has also signed an MoU with the Small Industries Development Bank of India to extend finance to small and medium enterprises.

However, for Microsoft, the Starter Edition could also be a weapon to combat two crucial issues the company is facing—the rampant piracy in India and the rising popularity of open source software like Linux. According to market reports, less than 20 per cent PCs in India use licensed software.

The companies' increased attention towards India comes at a time when the Indian government is trying to push PC usage across the country. The government has set a target to increase PC penetration to 65 per 1000 people in the next four years. Already, with reduced excise and import duties on components, the cost of the PC has slumped. With the new efforts from these two giants, Indian consumers could look forward to some exciting times in this space.