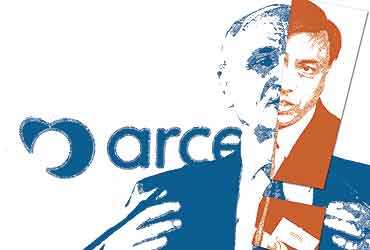 outlookindia.com
-0001-11-30T00:00:00+0553
The smell of the room freshener hangs heavy in commerce minister Kamal Nath’s first floor office in Delhi’s Udyog Bhavan. It’s as if the place has been doused with a bottle of eau de cologne. Had Guy Doyle, CEO, Arcelor, the world’s second largest steel maker headquartered in Luxembourg, walked into the office, he would have probably felt justified in comparing his company’s products to fine perfume, and those made by an ‘Indian’ competitor, Mittal Steel, the world’s largest steel group owned by Lakshmi Mittal, to a cheap eau de cologne.

Some weeks ago, the Mittal-Doyle public spat began when the London-based Indian steel tycoon launched a $23 billion takeover bid for Arcelor, which rejected it vehemently. It turned into an ugly political one when the unfriendly offer was greeted with hostility by several European governments (like France), some of whom are also Arcelor’s shareholders. In fact, during his India visit last week, French president Jacques Chirac termed Mittal Steel’s bid as both "hostile and unfriendly". He accused Mittal of not backing his bid by any industrial plan. "It is purely financial, that is to say, without any industrial plan being known or revealed and, contrary to practice, without any prior consultations," he explained.

But even as Chirac strongly denied that the shrill European reaction against Mittal was driven by "xenophobia and racism", Kamal Nath lost no time in terming it as that. The commerce minister upped the ante by saying that if the colour of the shareholder, the nationality of the shareholder, or the passport of the shareholder is to be looked at, then India will have to give new definitions to national treatment, a WTO clause which asks governments to treat overseas services firms on par with domestic ones.

Within no time, it became an India vs EU battle. Especially when Nath issued a veiled threat that if the French and the Spanish governments persisted with their opposition to Mittal, it would derail the WTO negotiations, where the liberalisation of services is a vital area that’s in the interests of developed economies like the EU. The EU has been pushing WTO member nations to offer national treatment in the services sector.

Despite being slammed by the media, corporate experts and the Left parties for making such a controversial statement and intervening in a "commercial matter", Kamal Nath claims his stance has been vindicated. In a recent reply to his letter, Peter Mandelson, EU trade commissioner, has said he’s in full agreement with the Indian minister’s views on national treatment. The EU trade commissioner’s letter has an implicit warning for European governments that developing economies like India will be within their rights to back away from WTO negotiations on services trade. And that India can create taxation barriers for European software firms to protect the Indian competitors.

Nath’s aggressive economic diplomacy has helped Mittal, who has said he was "grateful for the Indian response". He has left no stone unturned in drumming up support for the mega deal and his men fanned across Europe in an attempt to win friends and influence people. The aim was to dispel concerns over the little-known structure of the family-owned Mittal Steel and fears of possible job losses if the bid succeeded. Governments and trade unions in Europe are also worried that ‘Mittalisation’ of a strategic industry could create an unhealthy monopoly controlled by one who’s "not of their culture". Agrees Mel Wilde, the MD of the UK-based steel trader, Metalloyd, "The resistance in France is strategic. It would want a large steel producer like Arcelor to remain in French hands for national security in case of any unexpected events. Steel, for instance, is used in tanks, ships and guns."

But Wilde also adds that the French are nationalistic and the country resisted imports of English lamb and similar issues crop up regularly in the fishing sector. "For 30 years, Europeans have given us lectures on free trade but when the winds begin to blow the other way, they lose their shirt," says an Indian diplomat based in Europe. "It is said that in America, partisanship ends at the country’s borders, but in Europe it seems opposition to globalisation begins at Europe’s borders," he adds for good measure. What’s baffling is the EU’s tendency to declare certain sectors as "strategic assets"—from yogurt to steel. When PepsiCo, the US-based soft drink transnational, wanted to acquire the yogurt-making subsidiary of the French firm Danone (which incidentally owns a 33 per cent stake in the Indian biscuit maker Britannia), the move was prevented by the French in a fit of "economic patriotism".

Subtly side-stepping contentious issues, Mittal is trying to convince European policymakers and policy shapers that his was a transparent offer. "Our offer is based on sound industrial logic. We believe this logic is well understood, and has been reflected in the favourable response the transaction has received from the market. We have already started dialogue with politicians to address their concerns and will be meeting them soon to discuss details of the industrial plan. We have said that there will be no job losses as a result of this transaction and that we will honour Arcelor’s commitments," explains a Mittal Steel spokesperson.

The nri has let loose a spray of European PR experts to control the fallout. Besides surfacing in the government palaces of Luxembourg, Belgium, France and Spain, the steel magnate has astutely used the New India clout while putting on the European stripes when necessary. Mittal is on a clever combination course which might result in pushing him up the riches ladder. He has "explained" himself to a German government worried about an Arcelor-owned plant in the country closing down if he took over. Local leaders in the Lorraine region in France fretted over an R&D centre closing down.

Mittal is meticulously trying to cover all his bases, allaying fears and assuaging hurt feelings. Sources in Brussels said that in early February, Mittal also met Josep Borrel, president of the European Parliament, and Neelie Kroes, head of EU’s anti-trust department. Significantly, Borrel suggested having a public hearing on the matter. "It will help mould public opinion," said one diplomat familiar with Mittal’s plans. Mittal’s PR juggernaut will also take him to one-to-one meetings with various labour unions in the EU. His case is further bolstered as an official in Mandelson’s office observed that the bid for Arcelor can only be blocked if it violates WTO regulations. Technically, the EU can’t take any action against Mittal but can explore whether the acquisition goes against the competition law and creates a monopoly.

With personalities and governments taking sides in the Mittal vs Arcelor war, it’s a test case to decide whether India’s new-found economic clout can take on Europe’s long-standing power structures.

By T.R. Vivek in New Delhi and Seema Sirohi in Rome with Sanjay Suri in London

Don't Kill The Next Tennis Star