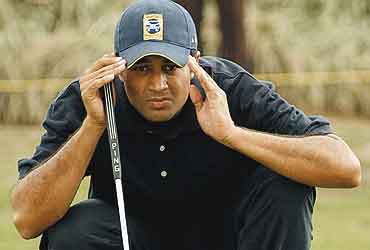 outlookindia.com
-0001-11-30T00:00:00+0553
Celebration, Florida, a small town founded by the Disney Corporation in 1994, adjacent to Walt Disney World, is an attempt to blend the best ideas from successful towns of yesterday with the technology of the new millennium. It's an attempt at new urbanism, where everything seems perfect. Lawns are always mowed, the house paint is never chipped and cars are parked perfectly. They say that in winters, town managers blow fake snowflakes on to the streets and in autumn, they arrange for faux leaves.

Some months ago, this is where Arjun Atwal and his wife, Sona, set up their new base. Celebration is where Atwal wanted to live his dream from. Last week, he took the most definitive step in that direction by becoming the first Indian to qualify for the world's most lucrative professional golf tour, the US PGA Tour, which has $245 million in prize money. This is that exclusive world where players can become millionaires over one single weekend. This is where golfers own jet planes, islands and private golf courses to practise in.

So the decision to settle in Celebration seems just right. For, this 30-year-old has achieved enough this year to revel in. He won his second European PGA Tour title—at the Malaysian Open—and followed that with an entry into the high-profile $6 million wgc Amex Championships. He also earned a qualification into the final stages of the US PGA Tour and his second Hero Honda Masters title. He is leading the Asian PGA Order of Merit and now has a passport into the world's biggest golf tour.

The icing on the cake: the couple is expecting their first child in May next year.

This is just about as good as it gets. But for all those who have watched Atwal closely for the last two years, it was waiting to happen. He had prepared most meticulously for it. Goaded into a physical fitness regimen by his wife, he has peaked at the right time. He won a title in his rookie year on the European Tour last year and finished third on the Asian Order of Merit.

This year he repeated that European success, and, barring a major reversal of form, by the time you get to read this, he should have wrapped up the Merit title, too. That will also fetch him an entry into the Japanese Tour and the British Open. "That is quite exciting, for I have never played a Major," says Atwal.

It's not easy being a professional golfer. Within an hour of finishing his last round at the Qualifiers, Atwal was on a flight to Dallas, from where he flew to Los Angeles. Speaking from LA airport, where he was waiting to catch his next flight to a destination halfway across the world—for his next week's assignment, the season-ending Volvo Masters of Asia in Bangkok—he sounded tired. But it was the kind of sweet tiredness that comes after realising the enormity of one's achievement.

With some players still on the courses—it was played on two courses, Crooked Cat and Panther Lake—when he ran to his car to get to the airport, Atwal got to know his final position was tied seventh only after touching down in Dallas. Qualifying with him at the same position was Indian-Swedish player, Daniel Chopra, who had shared the apartment with him through the week. Chopra also just caught the flight to Bangkok.

Even as Atwal spoke on phone, one could almost see his impish smile, the rakish charm and the ambling gait that sets him apart from the crowd. He looks so relaxed and laidback that it's hard to imagine him run to his car and through airport foyers or get worked up about catching a flight. Hey, there are times when he couldn't be bothered about missing a putt that might cost him $50,000.

Yet, here he was, talking about cold sweat and nervousness. Of the final day at the Qualifying School, Atwal said, "It was perhaps the most nerve-wracking nine holes I played on the final day.I was so nervous that I almost had to make a conscious effort to stop shaking. After I made the three birdies on the front nine, I just wanted to make pars on the remaining holes. It was even more difficult as there were no leaderboards to tell us where we were placed. The six rounds were so mentally, physically and emotionally draining that all I could feel was fatigue."

Atwal plans to play as much as possible on the US PGA Tour and then pick and choose a few big money events in Europe and Asia and possibly Japan. He will tee up for his first start next year at the $4.8 million Sony Open in Hawaii in mid-January. "Getting on to the PGA has been my ultimate dream. I was willing to sacrifice anything for that and now is my chance to match myself with the best in the business. The goal now is to win on the PGA Tour and do well in the Majors," he says. No Indian has done either, but then no Indian has even come close to playing on the US tour.