Help from the government they have given up on. But not their belief that the men who went to war 30 years ago live on in Pakistani jails. 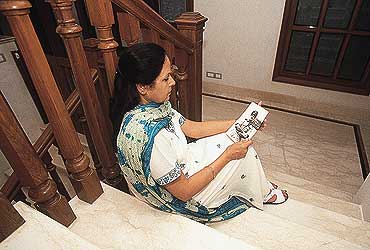 outlookindia.com
-0001-11-30T00:00:00+05:53
With a forlorn gaze fixed on the framed picture of her young uniformed husband in her Delhi home, Jasbir Kaur whispers: "Even birds return to their nests at night." Jasbir's gruellingly lengthy days haven't yielded the comfort night brings for long now, stretching interminably into 30 years. She has spent some harrowing times waiting for her husband Major Kanwaljit Sandhu who, she staunchly believes, is languishing in one of Pakistan's jails after being taken captive in the 1971 war. Now he is possibly a 63-year-old tired soldier, remembering his wife, pining for the infant daughter he left behind when he went to war for India—a child who has grown up to be a fine young woman. "These years have been so difficult for me, I shudder to think what indignities and torture he has had to go through," says Jasbir.

Prisoner to similar traumatic thoughts for the past 30 years, Kamlesh Jain's voice quivers when she talks of her husband, Sqdn Ldr Mohinder Kumar Jain. "With the first morsel of any meal I eat even now, guilt nudges my heart. Has he had anything to eat today? What does he get to eat in the Pakistani jail? Why should he be suffering so much for being a soldier for his country?" Kamlesh's three daughters are grown up now, and joined their mother's quest for the recovery of a father lost to them in the 1971 Indo-Pak war. Files full of letters to ministries, correspondences with the army, exchanges with human rights bodies, frayed newspaper clippings, photocopied scraps of information, all scream of years of battle—mental and actual—the Jains have been fighting for the return of a man they love so much. And for whom the country seemingly cares nothing. Says the frustrated family: "Kidnap a minister's daughter and our government sets hordes of terrorists free for her release. But no one cares a damn for a soldier."

Not even enough to negotiate the release of those who were captured while they fought a war they helped India win. Soldiers who should have been hailed and honoured as national heroes, but have instead been left to suffer the fate of forgotten hostages for three long decades in Pakistan's jails. They are possibly living casualties of the 1971 war, wasting away in enemy cells. Nothing but 54 names in a Prisoners of War (PoW) list. Pakistan insists no Indian PoW languishes in its jails—and promises to comb its jails "again" to find out if these 54 unfortunate soldiers are indeed there.

Pakistani President Pervez Musharraf's commitment to the missing soldiers' families at the Agra summit to get to the bottom of the matter extends only a glimmer of hope. As Vipul Purohit, son of Flt Lt Manohar Purohit, taken prisoner in the 1971 war, says: "For the first time in years I see hope of my father's return this time." So when Pakistan denies that the PoWs are in the country's prisons, Vipul bravely believes that the troubled neighbour fears being seen as a violator of the 1949 Geneva Convention for retaining PoWs for three decades. He suggests a solution for Musharraf and Atal Behari Vajpayee: "Call them smugglers, illegal entrants, trespassers, fishermen, spies...anything. Just give them back to us."

For, Vipul and his mother have waited long enough. In fact, Suman Purohit, 53, has refused to budge from Agra, the city of her husband's last posting before he went to war. Her relatives have asked her to join them in Rajasthan, but she chose to bring up her infant son single-handedly in Agra. Vipul is 30 now, has a son, and the entire family still lives in Agra."I want my husband to come back and find us exactly where he left us," says Suman. "He has been with me every moment in these past years, I know he is alive and well, and will return."

Ensuring the survival of hope has perhaps been the toughest struggle of women like Suman. They have spent their lifetime battling cynicism that their men are alive at all, combating bureaucratic indifference that wants to write off soldiers missing for 30 years as dead and gone. But they have kept their faith against all odds, tirelessly foraging for proof that men "presumed dead" by the Indian army are indeed rotting in inaccessible enemy prisons. Without any support from the government, often confronted with 'official' and fabricated evidence of their deaths, PoW relatives continue to believe in the well-being of men who they have lost as much to war as to a nation's apathy.

When Jammu resident Nirmal Kour, wife of Subedar Assa Singh, refuted the army's claim that her husband had been killed in the 1971 war, her son-in-law serving in the army became a target of harassment. Crusty government officials grilled Nirmal and forced her into revealing the name of her husband's former fellow prisoner in a Pakistan jail who had given her information about him. "They harassed him so much that he snapped all links with us," says she.

Even so, Nirmal and many a PoW relative like her refuse to have their faith broken. All have hosts of reasons to justify the belief that their man is a living prisoner in Pakistani jails—in fact, some of it, like their disjointed letters smuggled into India, looks close to irrefutable evidence.

B.K. Suri, elder brother of Major Ashok Kumar Suri, missing in the 1971 war, has such proof: two cryptic missives written on slips of brown paper by the incarcerated soldier, one in 1974, another in 1975. The second letter, with three dates on top, indicates how tough it must have been to pen a few words away from the jailers' glare. He wrote: "I am quite okay in Pak...there are 20 officers here...contact the Indian Army."

The letter, recalls elder brother Suri, had their father overjoyed and rushing to the Indian army for help. Only to face cold scepticism and indifference that he fought till his death early this year. Laments B.K. Suri: "My father spent all his time scouring for addresses of families of other 'missing' defence personnel, mobilising them into a formal group, writing letters to Indira Gandhi, Rajiv, V.P. Singh, Narasimha Rao, Vajpayee. Obsessed with the desire to see his son free, he died a broken man. Ashamed he had failed a son who had begged him for help."

Sons of the country who, many first-hand accounts indicate, might still be harbouring hope of returning to their homeland one day. Vinod Kumar Sahni, who worked with bsf intelligence till he was arrested by Pak Rangers in 1977, vouches for the fact that Pakistani jails house Indian PoWs. He should know: he spent 10 years in prisons across the border. Says he: "Most of them are kept in field interrogation centres, including fiu 702, Sialkot, Shahi Quila, Attock Quila, etc. And they are kept in stores and underground cells whenever human rights bodies and foreign delegations are invited to visit these prisons." People like him, he suggests, who have knowledge of Pakistan jails, could lead Indian delegations there if serious attempts are made to ensure the recovery of these soldiers.

Consistently cited as authentic proof of the existence of Indian PoWs in Pakistan's jails is Victoria Schofield's 1980 book, Bhutto Trial and Execution. She writes: "In addition to these conditions at Kot Lakhpat, for three months Bhutto was subjected to a peculiar kind of harassment.... His cell separated from a barrack area by a 10-ft high wall, did not prevent him from hearing horrific shrieks and screams at night from the other side of the wall. One of Mr Bhutto's lawyers made enquiries amongst the jail staff and ascertained that they were in fact Indian PoWs who had been rendered delinquent and mental during the course of the 1971 war.... Their shrieks and screams in the dead of the night are something I will not forget, he (later) wrote..." Then there was a picture of a soldier behind bars in Pakistan carried in Time magazine in its December 27, 1971 issue, which is believed to be of Maj A.K. Ghosh, an Indian PoW.

Kamlesh Jamwal, Jammu-based wife of Capt Dalgir Singh Jamwal, shudders to think what 30 years of confinement in hostile prisons could have done to her husband. All the more reason she wants him back. What makes her so steadfastly certain that her husband is alive? Her reply: "He comes to me in my dreams and tells me not to believe anybody else." Poonam Goswami, wife of Flt Lt Sudhir Kumar Goswami, shares this unshakeable faith. Her eyes welling up with tears, she recalls her husband's last words before leaving her, a new bride of just one month, for war on December 5, 1971. "Remember, no news is good news," he had said. Thirty years on, she is still awaiting good news and her husband's return.

In the 10 years that he has been vigorously pursuing the cause, Col R.K. Pattu, president of the Delhi-based Missing Defence Personnel Relatives Association, he hasn't seen even one soldier return home. "Things would have been so different if we sent the children of politicians to battlefronts," he says. "At least the maharajas led their soldiers in wars; these cowards only loot in the name of democracy."

But hopes die hard. B.K. Suri, for example, is convinced his brother will return. The house he built in Faridabad a few years ago has a floor for his younger sibling. During morning puja, the first tilak is still applied on his brother's framed picture. "We share our misery here, he is alone. He needs blessings most. Governments can be callous. God isn't. Ashok will return."

With Kavita Suri in Jammu

A cultural buffet for the children of Calcutta's sex workers