Sequels, as a rule, are infinitely worse than what preceded them. 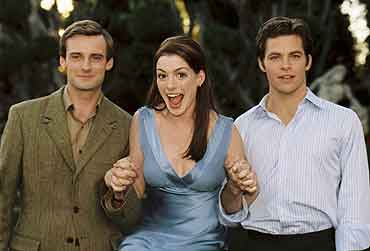 1) That sequels, as a rule, are infinitely worse than what preceded them. Now Godfather, we all know, is one of the respectable exceptions but then we are talking about the rule, not exceptions.

2) That much like the way Indian heroines find their ultimate on-screen nirvana on wearing saris (remember Kajol in Kuch Kuch Hota Hai!) so too the American heroine truly arrives only after having got out from her jeans and t-shirt into a ballroom gown.

3) That good girls end up first. But reality check shows they end up last.

4) That Americans are obsessed with royalty. They love the Buckingham Palace, they wept for Lady Diana more than Britain itself. And so you have Mia (Hathaway) living what is supposedly every young American girl's dream, of growing up to become Lady Diana herself.

If the first Princess Diaries was all about Mia Thermopolis's discovery of her regal roots, Part 2 has her travelling all the way back to Europe, to fictional Genovia after graduating from Princeton. She wants to take over as queen but opponent Viscount Mabrey (John Rhys-Davies) revokes a long forgotten rule that she needs to get married to claim the crown—30 days is all she has to get a groom. Meanwhile, Mabrey's plan is to make his nephew Nicholas Devereaux (Chris Pine) act lovey-dovey with Mia to stake claim to the throne but Nicholas, silly fellow, actually ends up falling in love with Mia.

The straight story is made to meander from one lacklustre adventure to the next. It's nothing more than too many fairytales rolled into one—Cinderella, The Prince and The Pauper and The Ugly Duckling. Every fairytale needs that vital something called magic to come alive. It's sorely missing here. Garry Marshall may have whipped it up once with Pretty Woman but has consistently failed thereafter. Meg Cabot books which have inspired the film may have had that sense of enchantment but the film is too saccharine sweet and plain silly to appeal to the smart kids of the day. Acting is bland with only Julie Andrews as grandmother Queen Clarice exercising some screen presence. But eventually even the Sound of Music nostalgia sucks.