Advertisement
Home National
On the road with manvendra singh 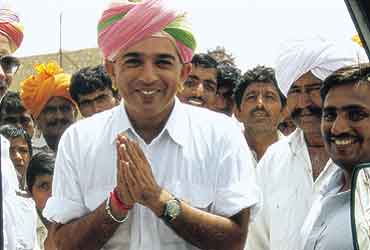 And he certainly has a fight on his hands. The bitter truth is the BJP hasn't won this constituency ever. The Jat and Muslim voters, who comprise 20 per cent each of the electorate, have always voted in tandem for the Congress.

But this time around, two developments can change the equation. The first is the fissure that's opened up between the two groups after the recent assembly elections. The Muslims feel the Jats voted against two of their losing candidates, which may spell trouble for the sitting Jat Congress MP, Sonaram. "The Jats cheated us and the unity is gone," says Syed Ghulam Hussain, a guiding light of a section of the Muslim community.