Prince And The Queen 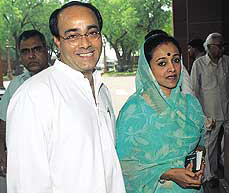 The prodigal son is back home. Sanjay Singh, the prince of Amethi and one of Sanjay and Rajiv Gandhi’s old buddies, decided to come back to the Congress on Rajiv’s 59th birth anniversary last week. After over a decade of badmouthing the Congress and contesting the 1999 Lok Sabha elections against Sonia Gandhi, which he lost, Singh has decided to return "in the interest of the nation". Normally, switching parties doesn’t mean much, but in Amethi it’s different. Singh’s comeback is being viewed as a shot in the arm for the Congress, not the least because Amethi is Sonia’s constituency.

Singh had parted ways with the Congress and unsuccessfully contested against Rajiv Gandhi in 1989. Peeved at his non-inclusion in the V.P. Singh government, he later joined the Chandra Shekhar government as a minister of state. His arrest for his alleged role in the murder of badminton star Syed Modi, whose wife Ameeta he later married, took Singh to the BJP—in ’98, he defeated Congress’ Satish Sharma in Amethi. His return is also being seen in the light of the Congress’ shocking defeat from the Gauriganj assembly seat—part of Amethi—a few months ago.

Analysts, however, attribute another reason. The influential Thakurs of UP, peeved at the invocation of pota against Raja Bhaiyya by the BSP-BJP government, are showing signs of moving away from the combine. The race for upper-caste votes in UP is all set to go full tilt between the Congress and the SP where Amar Singh is believed to control the influential Thakur lobby.