History or biology, Pakistani students get anti-India lessons in all their textbooks 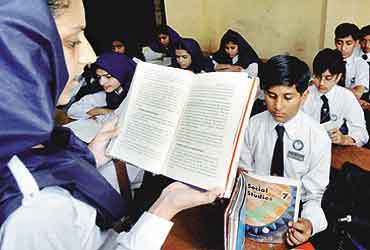 Qasim's explanation illustrates vividly the inimical impact of school textbooks, where history is manipulated to foster national chauvinism, where knowledge becomes a vital tool in the construction of national identity, where the sense of nation is promoted through veritable lessons in bigotry, hatred and gross misrepresentation of history. The extracts (see box) culled out from textbooks taught in government schools demonstrates how the ruling establishment, under the aegis of President Pervez Musharraf, is misusing books to develop an anti-India, anti-Hindu mindset—and also fan sentiments against Christians, Jews and the West. The regime's control over the education system is exercised through Lt Gen (retd) Javed Ashraf Qazi, who heads the federal education ministry. Head of the ISI between 1993 and 1995, Qazi supervised the recruitment of students from Pakistan's madrassas for constituting the extremist Taliban militia.

These textbooks came under the scanner following a story in the Los Angeles Times highlighting the tilt against non-Muslims. "Thousands of Pakistani children learn from history books each year that Jews are tight-fisted moneylenders and Christians are vengeful conquerors," the newspaper said. It expressed astonishment that such lessons are taught not in madrassas but in government schools of a country whose leader (Musharraf) is an ally of the US in the war against terror. The LA Times report prompted the US administration to voice its grave concern over the textbooks to Islamabad. US State Department spokesman Sean McCormack told a news briefing last August, "The issue is a matter of serious concern for Washington and the Bush administration would like the Pakistani leadership to effectively address it."